Not so much as drastic, but certainly different. But since the logistics change so much in this pre-historic pole shift, all of history is open to a rewrite. It will be easier just to postulate that much of Europe just developes as we would expect - around a much larger sub-tropical "Mediterranean Sea." Interestingly, the world is quite balanced "on its side" -- Austrailia and Antarctica, and parts of South America (all OTL) become the "new world." I'll be posting those maps soon.

As the intro says, its really a "parallel" time line since the point of departure was before civilization began. But I didn't want to start a new wiki for parallel worlds, so I place it here. I suppose it would be ideal for "map games" (evolution and mapping the moon and mars have been done). But I'd instead like to open it to anyone to develope The big differnce is that a larger part of the world is accessable earlier on. The harsh life that played a big part in forming the character of Northern Europe disappears along with the arctic ice. SouthWriter 01:38, September 21, 2010 (UTC)
This sounds very interesting! Baconton 11:22, September 21, 2010 (UTC)

Actually, I need to start a new wiki. But I want an audience, or at least some co-conspirators. :-)

I'll tag along with you if you're going to start a new wiki! You should probably get together a "colonist" group to "colonize" your new Wiki before you decide on making any decisions. Arstarpool 03:05, September 21, 2010 (UTC)

I shall temporarily settle in the New World (or Wiki) and then return to the Old World (and Wiki) and speak of the glory of the New World (Wiki). Together we shall defeat the New World's primitive barbarians. (aka Amerindians aka those trolls who attack new wikis.)

I knew I wasn't the only one to think of this. Chris Wayan did a lot of work at the "Welcome to Jaredia" page of worlddreambank.org, and put her north pole on the continent of Africa ( a few hundred miles west of where I chose. She has a huge ice cap covering most of Africa and ensuring a permanent landbridge to the Americas (which are completely in the tropics). If I had turned the earth along the prime meridian I would have got something similar. With mine, the poles are both just off shore on the equator of our world. This leaves less of an ice cap, leaving North America to be discovered only much like our Pacific Islands were in our world. And isolating South America, with a polar "Central America."

I hope this can work here, but being a start to a new wiki might not be a bad thing -- alternate worlds do stretch the alternate history genre quite a bit. And at a new wiki, it wouldn't be as crowded. I only hope that if I go there I won't lose out here at althistory. SouthWriter 16:45, September 21, 2010 (UTC)

If ya wouldn't mind South, could we get a map for the Sideways Earth please? That would be great! :D

Sure, I have a bunch of them just waiting to be inserted. I have to reorient a few of them since I changed my mind as to where to put the poles. I added a few to "Westward Expansion." More to come. Here are the overviews: 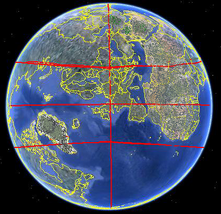 This is the "old world" with the center of the world (prime meridian and equator) going though "eastern" Britain. 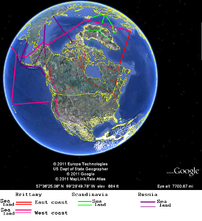 This map shows the exploration of the "new world" (inhabited West America). 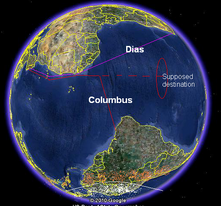 This map shows the whole world and the route by which Magellan's ships circumnavigated the globe.
Add a photo to this gallery

I even have the "United States of America" marked out on one map (subject to change). I had fun with the maps after I thought of the concept. I'm glad to see some interest again. It's "ASB - environmental" since this never happened in our universe, but it's fun to contemplate anyway. I suppose somebody wants to do a "map game" based on the outline, huh? That might be a very real option if someone can successfully create a projection map of the earth with the prime meridian as the equator. Any takers? SouthWriter (talk) 01:33, September 4, 2012 (UTC)

By the way, the last map needs to be changed so that Greenland is actually green (since it is in the tropics). I noticed it only after I posted. SouthWriter (talk) 01:36, September 4, 2012 (UTC)

I have a POD idea. You know how Uranus is sideways? Commonly, it is believed that something large hit it. What if that something large missed Uranus due to late passing of Uranian orbit due to a lesser gravity of the Sun? Then it could possibly bypass other planets and hit Earth in its formation days, with large chunks of it becoming several satellites of Earth? What do you say?

I also think that Europe should be in ATL Africa, and OTL Africa in maybe North America or Asia. Hard to tell. Not real good at reading orthographics when I don't know what I'm reading.

...Except that the earth was actually hit by a Mars-sized object, which caused the eventual formation of the moon. Not hard to have that mess with the planet slightly.

There's also no way that the object which hit Uranus would have done that.

SS, the tilt is the same, but the continents are arranged with a different orientation. This means that in the parallel universe the poles probably established due to internal workings rather than any collision. As for such catastrophic collisions, there is very little physical evidence for them. The formation of earth's satellite is still being debated by scientists with three basic views: impact, capture and "co-formation" (my coined term, sorry).

As for the continents, Africa is well situated to be the home of early civilizations. It straddles the equator in much the same way it does in OTL, so whatever theory of "out of Africa" one chooses, it still works. To make Europe analogous to OTL/universe, one would move "west" into what is Russia in OTL from a starting point of the Black Sea. With hospitable lands to the south, that would also be settled, Europe would be about the same size as today. Since the semi-tropic "west" of Siberia would be just about as hospitable, What we know as Asia would be settled about the same time as "southern" Europe. As stated in the article, then, what we call North America would in turn be settled down near the equator first and further "south" toward the pole in time. Thanks, though, for the suggestions.

So, anyone want to contribute to the time line? Take your pick, European or Asian history. Or, if you are really adventuresome, consider "Native" American History! I'd love to have some contributors if you at least follow my basic outline as found so far in the associated articles. SouthWriter (talk) 17:25, September 4, 2012 (UTC)

Great maps, although I was wondering about the editable types? Like the ones used in map games maybe? :D

Imp, see my remarks above, under the maps. What you want are flat maps based on a technology that I do not have at my disposal. If anyone can produce those maps, or find them available on line, I'll be glad to use them. I might try something with what I have, but I can't promise anything. --SouthWriter (talk) 19:36, September 4, 2012 (UTC)

I could try to play around with editable maps, it'll be a challenge but it should be fun. Question about Antarctica though, does the continent look more like a deglaciated OTL Antarctica or similar to GWS Antarctica? ChrisL123 (talk) 20:17, September 4, 2012 (UTC)

On an unrelated note, I just realized one of my favourite webcomics had a science question and answer on this very topic. While I haven't read it all, it does seem interesting. I think I'll try to make the map similar to the one provided (the Cassini projection). ChrisL123 (talk) 21:07, September 4, 2012 (UTC)

Actually, South, the co-formation and capture ideas have long been disproven. And there has been a lot of evidence gathered for an impact formation. Lordganon (talk) 03:58, September 5, 2012 (UTC)

Chris, this world's "Antarctica" ("Wonderland") is on the equator and totally tropical, so it would never have any glaciers. As for the moon, though the impact theory has the best evidence, it is far from conclusive, as new studies have shown. But as with all theories on origins, we will never know for sure (barring divine revelation, that is). Hey, I never rule out the possibility! As for the maps, I have some maps of the continents turned and marked and editable. As for a whole globe, I'm still working on that. Have fun with that, Chris. I'll post the continents separately later in the week. --SouthWriter (talk) 04:41, September 5, 2012 (UTC)

Well, South, I am a man of my word, even if that word comes two and a half years late. Though it's not in the Cassini projection, I think this one's better looking. The Americas are on the 'west' side, like how OTL maps are usually shown, but you're able to rotate it 180 degrees if you wish. Also, the "north" and "south" poles (in black) aren't exactly on the same level, probably because I used an antipodal map based from the Galapagos Islands. The extent of the ice sheets are also approximate. But please, feel free to use it and/or make any changes on it as you see fit. Hope you get to continue to work on this timeline :) ChrisL123 (talk) 06:21, August 19, 2014 (UTC)

Retrieved from "https://althistory.fandom.com/wiki/Talk:Sideways_Earth?oldid=1045440"
Community content is available under CC-BY-SA unless otherwise noted.