The 16th century, which spanned 1500 to 1599, was a period of great religious upheaval in Europe. The Reformation which began in 1517 by Martin Luther, soon gave way to a more intense Christian movement - the Restoration - which was led by Thomas Müntzer and his followers. By the midpoint of the century, large parts of Germany and Switzerland had converted to Müntzer’s Restorationist movement, with other restorers active as far east as Transylvania and as far west as France.

The Reformation, although only lasting a short period from 1517 to 1521, was majorly influential on the following decades of change in the Christian church. The historical record places the beginning of this movement to October 31, 1517, when Martin Luther nailed his Ninety-five Theses to the doors of the Wittenberg castle church. Laying out a number of grievances with the Roman Catholic Church, especially focused on the practice of collecting indulgences for the forgiveness of sins, Luther began to grow a close following of priests and other religious clerics in the Saxon region of the Holy Roman Empire.

Among Luther’s closest followers (who would later play a prominent role in the Restoration) during this period were Philip Melancthon, Thomas Müntzer, and Andreas Karlstadt. Luther, a prolific writer and an early polemicist, gained a reputation among many Germans as a prominent figure in the religious world of the time. 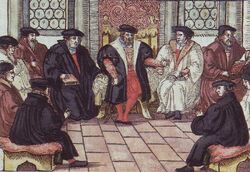 To combat this perception, Johann Eck wrote an early tract against the Ninety-five Theses. Andreas Karlstadt, seeking to defend Luther’s position, challenged Eck to a debate which would end up becoming the Leipzig Disputation in the summer of 1519. Karlstadt would end up joined by Luther (and Melancthon) in this important debate over the future of Christendom - centered around themes of grace and free will.

The Leipzig Disputation, while formally won by Eck, was seen as a victory by the Reformers in the eyes of the public. The printing press, a relatively new invention, was employed to great effect by Luther’s supporters. By summer 1520, Pope Leo X issued the papal bull Exsurge Domine which contested many of Luther’s Theses. To this, Luther responded with a number of anti-Papal works which led to his excommunication from the Roman Catholic Church in early 1521.

Later that year, in April, Martin Luther was summoned to the Imperial Diet being held in the free imperial city of Worms. There, he again faced Johann Eck who was now presiding over what was intended to be a recantation of Luther’s heresies. When Luther refused to recant, he was sent away from the Diet of Worms.

On his return trip to Wittenberg, Prince-Elector Frederick III having failed to negotiate his safe passage home, Luther was arrested and soon thereafter burned at the stake, a heretic condemned by the Catholic Church and the Holy Roman Empire. Thus came an end to the period known as the Reformation, although the repercussions of these actions would be felt throughout Europe. In particular, the execution of Luther would spark a great deal of outrage among German commoners and burghers, especially in Saxony.

Not long after the martyrdom of Martin Luther, Pope Leo X died of pneumonia in December of 1521. This presented the opportunity for the cardinals of the Roman Catholic Church to elect a new Pope to lead them in the trying times in Germany. Three cardinals were considered to be leading papabile: Giulio de' Medici, the Archbishop of Florence; Alessandro Farnese, the cardinal-bishop of Frascati; and Thomas Wolsey, the Archbishop of York and Lord High Chancellor of England.

As the various cardinals arrived in Rome to begin the conclave, Giulio de’ Medici appeared to have the upper hand - with a majority of cardinals hailing from or supporting the interests of the Holy Roman Empire in its ongoing war with France. However, enough cardinals were concerned with the Florentine Archbishop’s ties to Pope Leo X, Giulio’s cousin, and sought to prevent the Papacy from becoming a familial position. 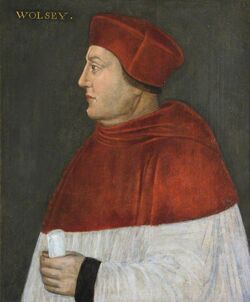 King Henry VIII of England had a deep interest in seeing a Pope elected who would be favorable to England in its long-lasting conflict with France. Earlier in 1521, Henry VIII had sent Wolsey to negotiate a treaty between Charles V, Holy Roman Emperor, and England against France. Therefore, Charles V was on favorable terms with Wolsey. Furthermore, Charles V was concerned that the followers of the executed Luther would resent the Papacy falling into the hands of a single family.

By a quirk of conclave politics, any candidate present required a two-thirds majority while non-present candidates required only a simple majority to be elected. Therefore, with 39 cardinals present, it would take 26 to elect de’ Medici while only 20 were required to choose Wolsey, who was in England during the conclave.

As the voting began, it became clear that Giulio de’ Medici would not cross the 26 vote threshold. Not deterred, he decided to use his influence to position himself for any future conclave. While Wolsey was young, at only 48, de’ Medici was younger still and counted on outliving the Englishman. Therefore, with the backing of Emperor Charles V’s agent in Rome, de’ Medici threw his support behind Thomas Wolsey, who was elected on the second day.

As news arrived in England of Wolsey’s election, he departed for Rome, where he was received by the Roman people with disdain. Crowned with the papal tiara in July 1522 amidst a plague outbreak in Rome, he took the name of Adrian VI (after the only previous English pope, Adrian IV).

The martyrdom of Martin Luther on his return to Wittenberg sparked a mixture of outrage and fear among his nascent followers. In this period, much of the transformation of the Christian church was precipitated under the influence of Thomas Müntzer, a former Catholic priest who had eventually adopted a more radical set of beliefs than Luther. Due to Müntzer’s large role in the beginning of the Restoration period, it is worthwhile to examine his activities towards the end of the Reformation and how he came to be seen as the successor to Martin Luther.

In the Swiss Confederacy

Must describe social conditions that were present more (using Kautsky, for instance)