28th: Archduke Franz Ferdinand of Austria-Hungary, heir to the throne, is assassinated by a young Serb terrorist in Sarajevo, Bosnia-Herzogovina (today Slavonia).

23th: In response on the assassination, Austria-Hungary sends an ultimatum to Serbia. Serbia, counting on Russian support, rejects some points of the ultimatum and mobilizes.

3rd: Germany invades the neutral Kingdom of Belgium and declares war on France. The United Kingdom of Great Britain and Ireland protests for the German violation of Belgian neutrality.

4th: The United Kingdom of Great Britain and Ireland declares war on Germany.

12th: Germany captures the fortresses of Liège, Belgium, after a week-long siege.

16th: A protest of Flemish civilians against Walloon officers in the Belgian Army results in violence between civilians and the military police in Flemish cities and Brussels.

17th: German Army enters Brussels and is celebrated by Flemish civilians as liberators.

18th: A leader of a group of Flemish soldiers is shot after he tried to escape the Army with some of his comrades. 18th: A Russian army entering East Prussia is defeated by German forces.

20th: The mayor of Antwerp calls upon the Flemish soldiers to throw down their arms. 'People of Flanders, today is the day to remember the Battle of the Golden Spurs. Don't fight side by side with the French!'

At the end of the month the German Army is standing at the gates of Antwerp, Belgium and is rapidly closing in on Paris, the capital of France.

1st: German diplomats start negotiations with the Flemish mayor of Antwerp, who has risen quickly in the hearts of the Flemish as their leader.

6th: The mayor of Antwerp, side by side of several Flemish leaders and the mayors of Brugge and Ghent, declares an independent Flemish Free State and calls the Kingdom of Belgium defunct.

7th: The Netherlands refuse to recognise an independent Flanders to eliminate the risk of being drawn into the war, but also calls upon the nations of the world to give the Flemish people the right of self determination.

12th: The German Army is holding in the East against the Russians and is surrounding Paris in the West.

15th: Siege of Paris starts. Germany does not attack the city, but leaves it unharmed. The Ambassador of the German Empire in London hints to the British government that peace talks could have a chance.

16th: Prime Minister Herbert Henry Asquith of the United Kingdom orders secret back-Channel talks with the Germans to be started.

18th: Chancellor Theobald von Bethmann Hollweg of the German Empire secretly sends Prince Maximilian of Baden to Milan in Italy to start talks with the British about a possible peace. Stanley Baldwin represents the British Empire.

24th: Tenth day of the Siege of Paris, peace talks start in secret in Milan. Germany holds ground in France and is gaining ground in Russia. 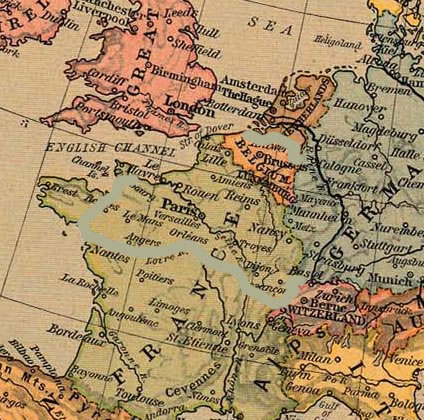 Positions of the German Army on September 24th

26th: Germany wins a battle along the Vitula River against Russia and starts talks with Polish nationalist for establishment of a Polish Nation after the war.

30th: Stanley Baldwin invites the French ambassador in Rome to the talks in 'the Milano Telegram'. 'There might be a chance of survival for the French nation. Report in Milan!'

1st: 'From this day on the British Empire recognises the right of self-determination of the Flemish people. And we invite these people to send her representative to our nation's capital!' With this statement the Prime Minister opens a session of the Lower House. In the following debate the Prime Minister answers on a question of the opposition: "We are now recognising every German puppet state to be set up?', 'If that has to be what it takes to restore peace in our world we might consider that, but the Flemish people have clearly stated their opinion on this issue.'

11th: A ceasefire on the Western and Colonial front is announced. 'We have the possibility of a peace on our continent in reach, we don't ask our youth to get their life in the balance when we are talking about peace. From 11.00 London time the guns on both sides of the front will cease firing and we will talk like civilised nations about the possibility of peace!'

14th: Official Peace talks between Germany and Austria-Hungary on the one side and French, British and remaining Belgian representatives start in Milan.

15th: Germany, Austria-Hungary and Romania declare an unilateral ceasefire on the Eastern Front.

21st: King Albert of Belgium in an interview with the London Times attacks the British government: 'The cabinet of Britain is sacrificing Belgium for the sake of world peace. At this moment, I'm a King without a country!'.

23rd: Peace of Milan, Peace on the Western Front.

24th: Germany starts a large redeployment of troops from the West to the Eastern Front. Smaller numbers of troops remain in the West to pacify the newly gained lands.

25th: When news of the Peace of Milan come through to Russia unrest starts to rise in the highest military ranks. Will they be able to prevent the Germans from defeating their army?

Situation in the beginning of World War One creates a victory for Germany in the West and eventually in the East without the entrance of the US and Italy on the Allied side.

Retrieved from "https://althistory.fandom.com/wiki/1916:_Year_of_Peace?oldid=1414053"
Community content is available under CC-BY-SA unless otherwise noted.