The United States presidential election of 1968 was the 46th quadrennial United States presidential election. It was a wrenching national experience, conducted against a backdrop that included the assassination of civil rights leader Martin Luther King, Jr. and subsequent race riots across the nation, the assassination attempt on presidential candidate Robert F. Kennedy, widespread demonstrations against the Vietnam War across American university and college campuses, and violent confrontations between police and anti-war protesters at the 1968 Democratic National Convention.

On November 5, 1968, the Democratic nominee, Senator and former Attorney General Robert F. Kennedy won the election over the Republican nominee, former Vice President Richard M. Nixon on a campaign of racial and economic justice, non-aggression in foreign policy, decentralization of power and social improvement. It was the closest election since 1876.

The election also featured a strong third party effort by former Alabama Governor George Wallace. Although Wallace's campaign was frequently accused of promoting racism, he proved to be a formidable candidate; no third-party candidate has since won an entire state's electoral votes.

In the election of 1964, after serving the 14 remaining months after President John F. Kennedy's assassination, Democrat Lyndon Johnson had won the largest popular vote landslide in US Presidential election history over Republican Barry Goldwater. During his term, Johnson had seen many political successes, including the passage of his sweeping Great Society domestic programs (also known as the "War on Poverty"), landmark civil rights legislation, and the continued exploration of space. At the same time, however, the country had experienced large-scale race riots in the streets of its larger cities, along with a generational revolt of young people and violent debates over foreign policy. The emergence of the hippie counterculture, the rise of New Left activism, and the emergence of the Black Power movement exacerbated social and cultural clashes between classes, generations and races. Every summer during Johnson's post-election administration, known thereafter as the "long, hot summers", major U.S. cities erupted in massive race riots that left hundreds dead or injured and destroyed hundreds of millions of dollars in property. Adding to the national tension, on April 4, 1968, civil rights leader Rev. Martin Luther King, Jr. was assassinated in Memphis, Tennessee sparking further mass rioting and chaos, including Washington, D.C., where rioting came within just a few blocks of the White House.

A major factor in the precipitous decline of President Johnson's popularity was the Vietnam War, which he greatly escalated during his time in office. By late 1967 over 500,000 American soldiers were fighting in Vietnam and suffering thousands of casualties every month. Johnson was especially hurt when, despite his repeated assurances that the war was being "won", the American news media began to show just the opposite. The Tet Offensive of February 1968, in which Communist Vietcong forces launched major attacks on several large cities in South Vietnam, led to increased criticism from antiwar activists that the war was unwinnable. The Johnson Administration was particularly damaged during the Tet Offensive when Vietcong forces managed to infiltrate the U.S. Embassy in Saigon, the South Vietnamese capital, before being killed by U.S. troops in a fierce struggle captured on national television. In response to the Tet Offensive, the U.S. military claimed that the war could only be won by adding several hundred thousand more soldiers to the American forces already in South Vietnam. In the months following Tet, Johnson's approval ratings fell below 35%, and the Secret Service refused to let the President make public appearances on the campuses of American colleges and universities, due to his extreme unpopularity among college students. The Secret Service also prevented Johnson from appearing at the 1968 Democratic National Convention in Chicago, because of their fear that his appearance might cause riots. 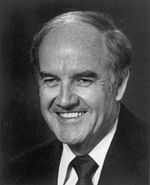 President Lyndon Johnson of Texas
Add a photo to this gallery

Nixon developed a "southern strategy," which was designed to appeal to conservative white southerners, who traditionally voted Democratic but were deeply angered by Johnson and Kennedy's support for the civil rights movement. Wallace, however, won over many of the voters Nixon targeted, effectively splitting the conservative vote. Indeed, Wallace deliberately targeted many states he had little chance of carrying himself, in the hope that by splitting the conservative vote with Nixon he would give those states to Kennedy and, by extension, boost his own chances of denying both opponents an Electoral College majority. The "southern strategy" would become a staple of Republican presidential campaigns, but it never became an effective campaign strategy for winning elections. Nixon's campaign was also carefully managed and controlled. He often held "town hall" type meetings in cities he visited, where he answered questions from voters that had been screened in advance by his aides.

Kennedy held a slight lead in the poles against Nixon as the campaign began, Nixon opted for a slashing, fighting campaign style. He repeatedly - and unsuccessfully - challenged Kennedy to a televised debate, and just like the debates with the John F. Kennedy, Nixon was trounced by the younger and far more dynamic RFK.

Nixon campaigned on a theme to restore "law and order", which appealed to many voters angry with the hundreds of violent riots that had taken place across the country in the previous few years. Following the murder of Dr. King in April 1968 there was severe rioting in Detroit and Washington, D.C., and President Johnson had called out the U.S. Army to protect lives and property as smoke from burning buildings a few blocks away had drifted across the White House lawn. However, Senator Kennedy criticized the "law and order" issue, claiming that it was indifferent to the reason for mass social unrest, and that Nixon was unwilling to deal with the problem directly. Nixon also mentioned during the campaign his opposition to desegregation busing.

During the campaign, Kennedy also used as a theme his support to the policies of Chief Justice Earl Warren of the Supreme Court. Many conservatives were critical of Chief Justice Warren for using the Supreme Court to promote liberal policies in the fields of civil rights, civil liberties, and the separation of church and state. Nixon, who opposed Warren's policies, promised that if he were elected President, he would appoint justices who would take a less-active role in creating social policy. In another campaign promise, both Kennedy and Nixon pledged to end the draft.

Kennedy, promised to continue and expand the Great Society welfare programs started by President Johnson, and to continue the Johnson Administration's "War on Poverty". He also promised to continue the efforts of Presidents Kennedy and Johnson, and the Supreme Court, in promoting the expansion of civil rights and civil liberties for minority groups. However, Kennedy also was unrelenting for most of his campaign in voicing opposition to the Vietnam War policies of President Johnson. As a result, from the start of his campaign Kennedy often found himself rallied by the antiwar movement, some of whom heckled and disrupted Nixon's campaign rallies.