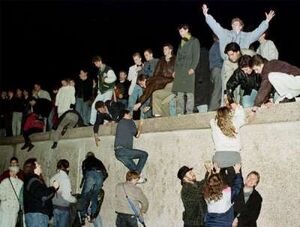 The Date is 8 November 1989. If you lived in East Germany, you would be celebrating. You would be able to visit the West Side of Berlin. You would smile, maybe remembering when you visited family on the other side of the city. You might glance at the buildings on the other side of the wall and think that finally, Soviet dominance might be over. Tomorrow, you could tear down the wall that divided your city. You would get down to the wall, where there was a large crowd with hammers and rope. People start hitting the wall. Then, you hear the rumbling of tanks and soldiers. You turn round and see Soviet troops behind you. They command people to stop. They don’t. You hear the distinct sound of Gunfire along the wall. You realise, this is a trap.

In West Germany, a West German citizen looks over the wall from their apartment in western Berlin. They watch with anticipation, waiting for the wall to fall. They pour their coffee, and prepare their Frühstück. Bang. They jump. Bang. A Coffee cup drops. Bang. The cup smashes down on the ground. A chill goes up their spine. They run to the window and see a sight they have not seen in a long, long time. The sight of people running from machine gun fire. They whisper: “Soviets”.

In Our Timeline, the collapse of the Berlin Wall was a massive time in human history. It showed the start of the Soviet Union’s collapse. It signified the end of the Cold War. This was partly due to the polices of Mikhail Gorbachev. But what if Gorbachev had changed his tune, and ordered the East German troops to stop people climbing over the wall?

The troops shoot into the crowd and maim thousands.

When a West German Police officer is killed by a stray bullet, the West Troops are ordered to protect the people on the wall and start to fire on the Soviet Troops. This starts the battle of the Berlin Wall.

As a result, Soviet Forces blockade Berlin, (similar to 1949). The US and the USSR try to negotiate, but talks break down. Then, at 23:50, at American aid plane is shot down by Soviet anti-aircraft guns. NATO declares war and releases its nuclear arsenal. The USSR retaliates and so starts WW3.

This timeline explores the result of this war In 1989, and its aftermath.

Retrieved from "https://althistory.fandom.com/wiki/1989_War?oldid=1772474"
Community content is available under CC-BY-SA unless otherwise noted.