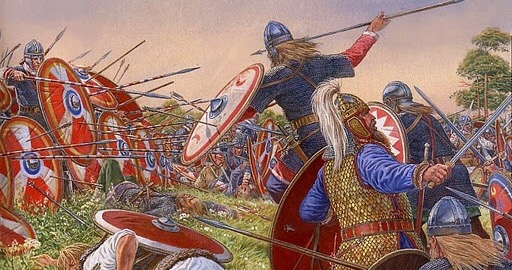 After Carthage had built up its political presence in the western Mediterranean, the nation decided to set its sights on the other end of the sea. The main powers in this area were the Ptolemaic Empire and Macedonia, both relatively old and powerful, especially when compared to Safineim, the nation Carthage had been forced to deal with most recently. As Macedonia was in a stable alliance with Etrusca, any chance of attacking that nation was passed up quickly. However, the Ptolemaic Empire had recently lost a war to Macedonia, and was a far more appealing target. With this in mind, in the year 97 BC, the Carthaginians gathered an army estimated at 7000 and sailed across the sea, ready to attack.

The army was initially planned to arrive in Alexandria, but two things conspired to prevent this. The first was unfavorable weather, something that could be waited out, but could just as easily get worse. The second was that the Ptolemaics had apparently caught wind of the oncoming invasion and had fortified the city far more than expected. So, contrary to the original plan, the Carthaginian troops landed about 30 miles west of Alexandria. Despite the short distance, it would take almost two years to get to and lay siege to the city, with Alexandria ultimately being captured in 95 BC. This city - along with the surrounding area - was the only thing Carthage gained from this war, though in the long term, the Ptolemaic Empire would collapse into civil war about 100 years later.

After the second Safinei war, Safineim barely managed to keep their economy afloat, mostly through the use of attempted government interference and more trade. This proved to be an exceptionally unstable model, and by 89 BC, the Safinei economy was in ruins. To make matters worse, that year had featured a terrible harvest, and as winter set in, many were left without access to food. Inevitably, this caused riots which shattered Safineim and left it bleeding for months on end, as the economy only got worse. Crime was rampant, particularly in the eastern regions, where government influence was comparatively low to the rest of the country.

After six months of near anarchy, a government coalition, led by a new king, attempted to bring order back to the nation. The first step was to start a successful farming season, and as a result, the government began paying for farmers to cease rioting and return to their fields. While this halted the chaos in rural areas and provided a food source, the government also had to provide relief for those in cities. This came in the form of various - and probably unnecessary - labour projects, mostly revolving around infrastructure. These measures had the crisis stopped, though debt continued to mount, and would continue to do so until the nation's demise.

After their conquest of Greece and eastern Anatolia, the Macedonians settled down to rest on their laurels. By 69, however, the situation had changed and a strong expansionist faction made up of mostly generals and high ranking soldiers began to rise in the region, demanding further invasions of Anatolia. This faction quickly gained traction with the populace, but was venomously opposed by the monarchy and more conservative generals. After several minor clashes, tensions reached a breaking point in the summer of 67, and the Expansionists rallied a small sample of their troops in Athens, and began to march eastward, declaring that they would conquer regardless of the King's opinion.

As soon as this became common knowledge, the non-expansionist faction (who would soon call themselves the Monarchists) mobilized a much larger army. After briefly facing each other off, Monarchists effectively massacred the small Expansionist army, sending the whole movement reeling. However, a general named Alexander quickly took the reigns of the shattered movement, and raised an army much larger than the one that was destroyed, estimated to be 16,000 strong. Quickly, Alexander and his army hopped over to Macedonia's Anatolian territories, with the goal of either creating a separate nation there or taking control of the entire nations.

Quickly, this strategy backfired, as the Anatolian provinces were less populace and resources rich than the Greek ones, giving the Monarchists a huge advantage right off the bat. The situation worsened when a Monarchist army already deployed in Anatolia moved northwards, cutting large parts of the area off. After fighting this for years on end, Alexander's army was decimated and weakened, and Monarchist reinforcements were incoming. As soon as Monarchist troops arrived in Anatolia, they merged with the other Monarchist army, outnumbering the Expansionists three to two. After eight years of intense fighting, the Expansionists were forced to capitulate, and the Monarchists declared victory.

As the Senone grew in power and economic influence, the centralized power began to expand northwards, across northern Italy. This led to the creation of many more cities, which were used extensively for trade, and allowed the population to skyrocket. Not only that, but dominance over northern Italy made the Senone Republic a much more influential player in the affairs of Etrusca and Safineim. However, while this expansion would be very beneficial to the Senone Republic in the long term, it would severally hurt in the short term. The Senone government invested far too much in infrastructure, and as a result nearly bankrupted themselves. However, these effects would eventually be alleviated, and the expansion declared a success.

Following the Senone expansion farther into northern Italy, and the Macedonian civil war, trade was massively disrupted across most of Europe. This disrupted trade was a massive blow to Europe's economy and by 49 AD, many economies were in ruins. These economic pains affected the Senone Republic, Nouio, Etrusca, Carthage, Safineim, and Macedonia the most, which were some of the largest economic power in the region. However, the worse off nation was easily Safineim - what little trade they had was completely destroyed, and their economy fell even further than it already was. On the other extreme, Orleans and Carthage were both able to hang on surprisingly well, Carthage surviving off trade with Iberian tribes, while Orleans relied on its internal industry.

After almost ten years of this, recovery efforts began, centered around Nouio and Carthage. The first step of it was a cooperation between the two nations, involving a new trade route between the nations. From there, the economies magnified each other, and the side effects of this began to prop up the economies nearby. This began to seriously help the economies of the other Keltoic states. With that area propped up, trade was expanded to the Senone and Etrusca, who accepted the influx of trade with open arms. However, on Etrusca's insistence, Safineim was left largely cut out of this, allowing their economy to recover, but remain relatively weak. Overall, this economic failure would increase Europe's reliance om trade, and possibly make the two wars that closed the century inevitable.

As Europe's economy began to recover, Nouio was left miles ahead of its neighbors, in terms of economy, stability and military power. In this position, Orleans began to exert its influence over Parisi, and to a lesser extent, Locudula. However, the cataclysm for war would be Heldarc - a highly militaristic king - coming to power. He assembled a military of around 3000 men, which was easily three times the size of any Keltoic army at the time. Around 2 BC, he began to secure trade routes with the Senone and Carthage, focusing on the parts other Keltoic states could potentially raid. As his last preemptive measure, he jacked up prices of goods that were sold to the other Keltoic states, hoping to hurt their economies. Because most Carthaginian and Senone goods went through Nouio, this proved very effective.

After economically hurting the other Keltoic states and securing trade routes, Nouio deployed their army to fight Parisi. While the first battle didn't go well on account of the officers managing so many more soldiers than they were trained to, from there, the war went downhill for Parisi. By 4 AD, Parisi was surviving only by throwing everything they could at the conflict, to no avail. By 6 AD the Parisians were utterly destroyed. In fact, after the fall of 6 AD, only minor revolts would happen in Paris, and these would practically stop by 13 AD. After this period of fighting, Heldarc and his army rested with the city under their occupation, planning to start taking Locudula and Dubron the next year.

However, after watching Parisi fall, the two other cities beat Heldarc to the punch, and deployed an army of nearly 5000 troops. Meanwhile, Nouio had lost around 700 troops fighting Paris. This overwhelming attack quickly crushed the Nouions in three quick battles. After these battles, Nouio had to regroup. After winning a defensive battle, Nouio was able to raise more troops and strike back. Taking advantage of the now spread out army of Locudula and Dubron, Orleans was able to knock the entire thing off balance. After winning several crucial battles in 8 AD, the rest of the war was mostly a cake walk for Nouio. By 13 AD, Locudula would fall and Dubron would surrender, finally ending the Keltoic Unification War. This would create the powerful Keltoic Empire, and nation that would shape Keltoic and European politics for the next 500 years.

After Europe's recovery, the Etruscans were left far more rich and stable then their southern neighbor, who had barely recovered, and by some measures were worse off. The new and ambitious king of Etrusca, Decius, decided to take advantage of this. By 4 BC, he declared that he would invade Safineim, and annex it for Etrusca. He began to gather a massive army - historians estimate it contained between 40,000 to 60,000 men, and was probably the largest army massed out side the middle east at the time. The Safieni, though they began to here of the Etruscan plan in around 2 BC, only massed about 10,000 troops as a border guard, not suspecting the massive assault that was to come.

Only several months after Safineim began to gather it's army, war broke out. It stared with massive assault from the Etruscan army, straight down Safineim's west coast. Despite being outnumbered by a staggering proportion, the Safinei were able to handle the assault relatively well. Both sides took high casualties, but the Etruscan army was bottled up and unable to pull out. As Safinei reinforcements arrived, the fighting only grew more intense. This stalemate remained until the arrival Radarca arrived in 2 Ad, to take control of about 15,000 men, and began plans for a mass assault down Safineim's east coast, throwing the entire war off balance.

In the summer of 2 AD, Radarca begins his assault down Safineim's coast. With very little resources to defend this area, Safinei resistance is minimal and Radarca is allowed to pillage his way unchecked through the Safinei countryside. After fighting for two years, he returns, having ravaged Safineim's ability to fight. After this, both sides of the conflict begin to politically collapse. Safineim because of the relentless onslaught, and Etrusca because of the lack of prosperity outside the war. By 13 AD, both sides collapse, and merge into a new nation - Dardanian Etrusca - lead by the powerful Dardanian family.

Retrieved from "https://althistory.fandom.com/wiki/1st_century_BC_(Vae_victis!)?oldid=1403611"
Community content is available under CC-BY-SA unless otherwise noted.