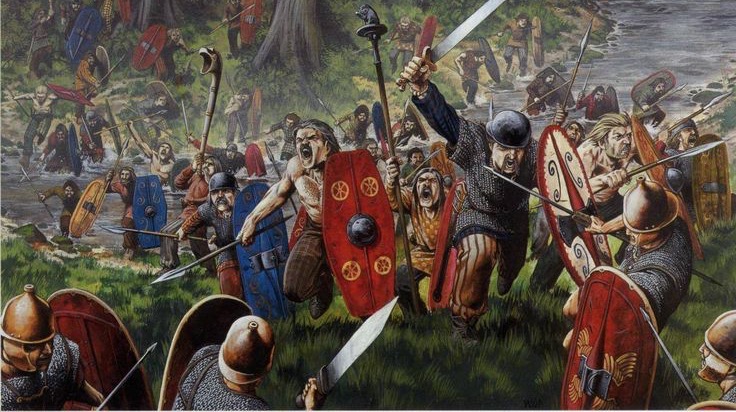 In the conclusion of the tribal war, the tribal army charges the Nouion line

As Senone trade with the Keltoi proved extremely profitable, in 199 Carthage decided to expand their own horizons and join in on the increasingly lucrative business. At first, Carthaginian simply landed on the southern shore of what would be known as Keltoia, and traded with tribes in the south. However, as this proved far less efficient than the Senone trade routes. With this in mind, Carthage began to slowly establish trade routes to the north, and trade became many times more efficient. However, this new method quickly reveled a major problem. While the Senone were willing to let Carthage trade, they demanded that the other nation pay them taxes for the right.

However, it was quickly determined that Carthaginians were mostly unwillingly to pay the Senone for the right to trade, and simply ignored Senone demands. Needless to say, this caused a lot of tension between the two sets of traders, and violence occasionally broke out. Realizing how much this hurt profits, the two nations decided to come to terms with each other. In the end, it was decided that Carthage would pay no taxes to the Senone, but would have to open favorable trade with the Senone Republic. After the negotiations concluded in 195, trade with the Keltoi was greatly increased, and the process of centralization in the region sped up. Although Carthage, unlike the Senones, never established major trading posts or towns, but still contributed much to the centralization of the region.

With Macedonia still licking its wounds from the collapse of Alexanders Empire, and were desperate to recreate some form of it. So in 187 Etrusca saw a way to cut of Safinei trading in the area. Because The Greek states made up almost 70% of their trade volume, all Etrusca needed to do to cut them off would be too have one nation loyal to them controlling the area. Realizing this, an offer was sent to the leadership of Macedonia. Etrusca would help Macedonia retake Greece and parts of Anatolia, and in exchange they would cut off trade with Safineim. Within a month, the proposition was agreed upon, and soon after that, 13,000 Etruscan troops, plus Senone auxiliaries, were delivered to assist Macedonia with retaking Greece.

The first assaults where massively successful, quickly taking Epirus, as well as large parts of the Hellenistic League and Aechean League. The attack continued violently, drawing the attention of nearby nations. However, despite the fear of being attacked, very few intervened in anyway. After taking over the rest of Greece, Macedonia cut off there trade connections with Safineim and turned to invade parts on Anatolia. Pontus, Bithynia, Pergamon, Rhodes, and the Ptolemaic Empire fell like dominoes, putting the area under Macedonian control. After these successes, in 179 Macedonia learned from Alexander's mistakes and halted expansion, solidifying their control over the area and their alliance with the Etruscans.

The first Senone trading city to develop it's own regional government was Nouio, a city situated North West of the Senone Republic. As his tribe became more centered on Nouio, a Chieftain named Enchar began to fashion himself as monarch of the city, rather than a tribal leader. He established basic laws, and a garrison of 50-60 soldiers to enforce general order. The city was already a major Senone trading post, and under Enchar, it continued to grow both in terms of economy and population. In fact, before Enchar came to the city in 156, the city had only about 2000 people in it, by his death in 124, the population stood at at least 15,000. This set to basis for the power of Orleans, which still lasts to the modern day.

The formation of Nouio quickly inspired other nearby leaders to similarly centralize their cities. Between 156 and and 138, around 20 Senone and Carthaginian trading posts evolved into some form of centralized city, with Nouio, Parisi, Locudula, and Dubron quickly becoming the largest. These cities were surprisingly organized, and even created The Union of Cities an organization that had Its first meeting in 125. The council of cities helped the new states define laws and boundaries, and provided some form of contact between them. This centralization befitted both the centralizing tribes and the Senone, as it made it easier for the Senone to trade and vastly heightened the standard of living for the tribes.

With Safinei trading destroyed in Greece, they blamed their failure - completely reasonably - on the Etruscans. Devastated by the lose and full of anger, so in 265 popular demand quickly forced the Safinei army to get ready for war. Worried by such a quick rise to arms, Etrusca quickly moved their troops to the border. However, they quickly realized that they did not have enough troops to achieve this. Even under the first weak attacks, Etrusca withdrew to tighten their defensive line. Taking the advantage, the Safinei launched their first full strength attack. This attack is estimated to have been made up of 18,000 troops, and the Etruscans only had 11,000 to defend their nation with.

However, the Safinei's strength in numbers quickly proved to be more of a weakness. The attack, while strong, was entirely disorganized and left several weak points wide open to the Etruscans. Quickly exploiting these weaknesses, the Etruscans cut the Safinei army to ribbons. The Safinei were unable to sustain such high casualties, and were forced to retreat to the border and set up a defensive line. Quickly it became apparent that the Safinei could not hold off an Etruscan attack. However, with no will to attack and destroy Safineim, Etrusca instead forced Safineim to pay huge repartitions, ending the war the same year it started.

Following the first Council of Cities in 150, the city states began to consolidate their holds over Keltoic lands, often at the expense of local tribes. While tribes were usually assimilated, and allowed to either settle down or continue their current lifestyle on a smaller scale, this method sometimes failed. As Nouio began to expand further south, to gain control of the usable farmland, they forced out a tribal group lead by the now legendary Rasxer. After being forced out of his homeland, the tribal leader gathered several of his friends and launched an attack on a Senone trading caravan. This attack killed several Senone, as well as Keltoic traders, and news of the attack spread across the area.

Quickly, Enchar deployed his garrison, as well as 50 extra soldiers to combat this group. This force of 90 troops moved south, and engaged Rasxer's larger force. The fighting was brutal, and although the troops from Nouio managed to win, this only lead to the reinforcement of the tribal army. As the Nouion troops moved in for the kill, they were caught by surprise by the size of the "defeated" army, and were forced back with upwards of 40 casualties. As the defeated force retreated, the tribal army was jubilant, and quickly recruited hundreds of men to join their cause, bringing to total up to perhaps 1500 troops. With this comparatively massive army, Rasxer began to march towards Nouio, ready to destroy the city.

With the tribal army marching towards Nouio, Enchar had only several days to raise an army. Despite his best efforts, only 600 troops were raised. Because of the city's lack of built in defenses, it wasn't decided the battle would take place several miles outside the city. The formation for the Nouions would be a sort of concave line, a net for the tribal army to fall into. The formation proved devastating to the tribal attack. As the army lurched forward, the Nouion army, despite lacking formal training, were able to simply wait for the tribal attack to fall into their lines, and destroy them as they came into contact. This proved instantly devastating for the tribal army, and brought them to a bloody halt. This effectively ended the attacks, which were soon destroyed by the Nouion army, thus ensuring that the city states would last.

After Orleans had defeated the much larger tribal army, it effectively became the most powerful state in the area. Meanwhile, the cities in the North-West began to form their own regional identity. Characterized by city states instead of tribes, and dominated by Nouio, the area became known as Ketoia, so called because of the high Keltoi population. However, despite being dominated by cities, the area had extremely underdeveloped agriculture, and relied almost completely on Senone food, and what little they were able to raise. While this system worked for the Keltoi, at least partially, it was detested by Senone traders, who found trading food to be difficult and unprofitable. In order to alleviate these problems, the Senone began to help the Keltoi create a solid basis for agricultural growth.

This quickly lead to an agricultural boom, centered on Nouio, and to a lesser extent, Locudula. Because of this, Keltoia became slowly more independent from the region's reliance on trading with the Senone and Carthage. This put much more power in the hands of the city states, and this allowed their populations to truly explode. Orleans managed to attain perhaps 40,000 citizens - competing with several Italian cites, including Rome. This economic and social prosperity lead to several wars being fought over the rights to farm land in 134, collectively known as the Farm Wars. Despite these destructive wars, the cities managed to remain powerful and stable throughout the period. Eventually the wars even increased their economic capacity, though it is debatable whether this was a direct effect or not.

With control over much of the western Mediterranean, in 117 Carthage decided to expand its influence into Iberia. Colonies began to be set up along the coast, and existing ones grew extremely quickly, growing in both population and economic power. Colonies spread across the coast, mostly focusing on development along the coast and creating more ports, but expanded inland slowly. As these colonies spread inland, they became increasingly important to Carthage and it's trade. Not only did they help trade by providing better proximity to the Gallic city states, but it also formed entirely new markets. Trade with native Iberians was very profitable, and only served to grow the colonies faster than before.

However, as the Iberian colonies became more and more influential to Carthage, they started to ask for full integration with the empire. This was initially widely opposed by the leadership, with many citing that fact that there was no real reason to let them in. These rulings caused much animosity with the Iberian locals and colonists, with various riots breaking out in the summer of 46 AD. After the so called "Summer of Chaos," much had to be reconsidered. In the end it was decided the southern regions of Iberia would be fully integrated, while the territories further north put into a special administrative zone. This calmed tensions and allowed both sides to fall peacefully into their new roles.

Retrieved from "https://althistory.fandom.com/wiki/2nd_century_BC_(Vae_victis!)?oldid=1481530"
Community content is available under CC-BY-SA unless otherwise noted.