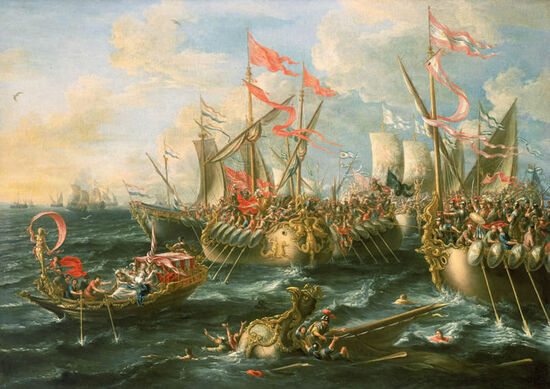 After the end of the fifty years war, the Safinei were weakened and sought to regain their massive loss in terms of wealth. They decided to do this without war, and instead built up a fleet for trading. Progress was slow at first, with various groups being unwilling to trade with the newcomers, and many being openly hostile. Despite this doubt, the Safinei quickly built up their reputation, and by 280 had built up a substantial and rich trading network. Their main market was Greece, but they also focused on Egypt, and to a lesser extent Iberia. Quickly, this trade made the nation wealthy, and the Safinei economy began to revolve around trade.

However, their trading empire did not go unnoticed by Carthage, a nation that currently held a near monopoly of trading across the Mediterranean sea. Quickly, Carthage began to realize a new trading power in their area would significantly harm their business prospects, and possibly come into conflict with them in the future. Worried about this, Carthage dispatched a naval force to negotiate with the Safinei. The negotiations were built on threats of war, a war that the Safinei knew they could not afford. In the end, Safineim agreed to pay a 5 percent tax on each trade transaction to Carthage, in exchange for the ability to maintain their current markets.

After the Defeat of the Boii, the Senone started on a path towards centralization. The main reason for this, at least initially, was to hold onto the captured Boii territory, and move the tribe to assimilation. Slowly, the Sneones began to build several cities, notably Senona and Eresca, both with a population of about 25,000. Meanwhile, villages became bigger and more permanent, and were more often close the the trading opportunities of the sea then the hunting of the inland. Additionally, the Senones began to start more intensive agriculture, with crop yield increasing exponentially. This allowed the formation of a permanent military force, and also opened up opportunities for other professions, such as weaving or baking.

With a more stable population, the Senone Government also began to centralize. While their leader was still referred to as a chieftain, he had taken on the role of King, and a palace was even built in Senona. In addition to a more kingly chieftain, the Senone elected local rulers, who served as bureaucrats, who in turn appointed heads of the military for their region. The new government also began putting taxes on agriculture, and moving the taxed food to storehouses as insurance against famine. Although the new government was still relatively unstable, in the coming decades it would centralize and stabilize, creating a powerful state in Northern Italy.

Although the Safinei and the Carthaginians had reached an uneasy peace regarding trade, neither side was satisfied with the deal, with Carthage wanting more taxes from the Safinei, and Safineim wanting to pay less taxes to Carthage. Finally in 245 BC, when several Safinei ships refused to pay the tax to Carthage. This quickly resulted in these ships being sunk or captured by Cathage, and as retaliation, Safineim declared war. With the vastly superior navy, Carthaginian ships quickly destroyed nearly half the Safinei trading fleet, and the vast majority of the navy, neatly solidifying their naval control over the Mediterranean. With the sea under their control, Carthage immediately started massing troops in Sicily, planning for a massive strike against the Safinei mainland.

Soon after the Safinei navy was defeated, Carthage began a land invasion. Despite having a superior force, the advance quickly stalled against the much better trained Safinei land army. Carthage was thus only managed to establish a small foothold in southern Italy, their positions under constant siege by Safinei forces. With neither side making any progress, Carthage began a full naval blockade of the nation, hoping to strangle their trade routes. With an even greater decrease in trade then before, the Safinei began to fall apart, allowing Carthage to gain a larger foothold in southern Italy, starting to threaten the Safinei homeland. The fighting intensified, but this time, the Carthaginians were favored, as Safineim began to lose more land.

Even as Carthage was defeating them, both on terms of cutting off their trade and slowly advancing northwards, morale in Safineim remained relatively high. Despite the high morale, the Safinei army was slowly pushed back, forcing them to form a defensive wall, effectively surrendering much of the southern Italian Peninsula to Carthage. Carthage continued attacking the defensive wall, causing the Safinei to take massive casualties, and with orders not to advance and risk breaking the wall, all they could do was take it. Finally, in 244 BC, the Safinei asked for a treaty. Surprisingly, the treaty was relatively lenient, allowing the Safinei to continue trade, as long as all trade ships stopped in Carthage before trading and after it was coplete. This left the two sides at peace, which would last until Safineim collapsed in 13 AD.

Although Etrusca was a republic, It also had autocracy mixed in with it. Its leader was a king, and its Princes (Elected to serve as the kings second in command) were elected by a senate that was made up of the richest and most powerful men in the country. While common people did elect 47 members of the so called lower house, the 53 appointed members of the upper house held most of the power. As certain rich families, specifically Cormora, Esqueta, Palpatine, and Dardania, began to grow more and more powerful, totally dominating the upper house. This caused thousands of Etruscans feel like their nation was more than an autocracy than a republic. The final straw was in 234, when during the biannual appointments to the upper house by the current leader, when all 53 of the seats were taken by members of the top four families. After that, citizens started revolting across the nation, with a large group to the south declaring themselves "The Army of the Republic."

However, the elite quickly reacted to the threat mustering troops around the de facto capital of Veii and the economic stronghold of Rome. Because of the soldiers high social position, the army saw very few revolts, except in former Umbrian lands, were several garrisons joined the rebels. In response to calls for members of the lower senate to try to restore their power, The lower house was disband and many of its were killed. This enraged the already rebelling populace, and allowed the Army of the Republic to recruit more troops, nearly doubling it's numbers. While the Army of the Republic tried to secure the South East portion of the nation, the Dardanian Guard, a group of soldiers sponsored by the Dardanians, began to put down revolts in other cities. These battles were often closer to massacres, the untrained, badly equipped, Citizens against the brutal and efficient Dardanian Guard. By 232, all of the revolts had been violently pit down, except the Army of the Republic, which now controlled a little less than a fourth of the nation.

With much of the nation under government control, Gaius Dardania, the current head of the house of Dardania, lead a massive army of 18,000 to face the dwindling army of 15,000 still in control of parts of Etrusca. The first encounter between the two armies was an east victory for Gaius, as the enemy army was only a scouting force of 1000. After this victory, he lead his army straight across rebel territory, leaving them with only a small portion of their former territory. Upon reaching the Adriatic sea, the force moved south, and upon encountering the rebel army smashed it apart. By the summer of 231, the army of the republic was destroyed, and the rebellion was over. The government was reformed, keeping essentially the same system, except without the citizen elected lower house, and the upper house being almost completely dominated by Dardanians, with 37 out of the 60 seats. The rebellion was ultimately a failure, and led to an even more autocratic government then before, which would eventually result in the Second Etruscan Republic, also known as Dardanian Etrusca.

After the Senone republic was officially formed in 247 BC, they began to see the benefits of trade with the less settled northern tribes. Quickly, a strong trade industry began to form, with large caravans sending goods such as weapons and tools northward, and bringing furs and other goods. This steady stream of supplies from the south caused the Keltoic tribes to slowly centralize, at least in the sense that they changed their hunting patterns to allow for increased trade with the Senone. Meanwhile, the Senone set up trading settlements, several of which quickly grew into small cities, such as Nouio, Locudula, Dubron, among others. These cities attracted tribes, and soon brew to the size of small Italian cities.

As more cities sprung up, they were increasingly ruled by Keltoic tribes, rather than Senone traders. This helped both sides, as the Senone no longer had to pay for the upkeep for as many cities, and the Keltoi became increasingly centralized. While there were still no organized states, local identities began to be built up, and cities had more and more influence over peoples daily lives. While competition between cities was still rare, it was not uncommon to see rulers of cities employing small garrisons of anywhere between 20 and 60 men. These garrisons are considered one of the earliest signs of centralization on a large scale. Soon, the cities would centralize further into city-states, and eventually, nations.

Retrieved from "https://althistory.fandom.com/wiki/3rd_century_BC_(Vae_victis!)?oldid=1536849"
Community content is available under CC-BY-SA unless otherwise noted.