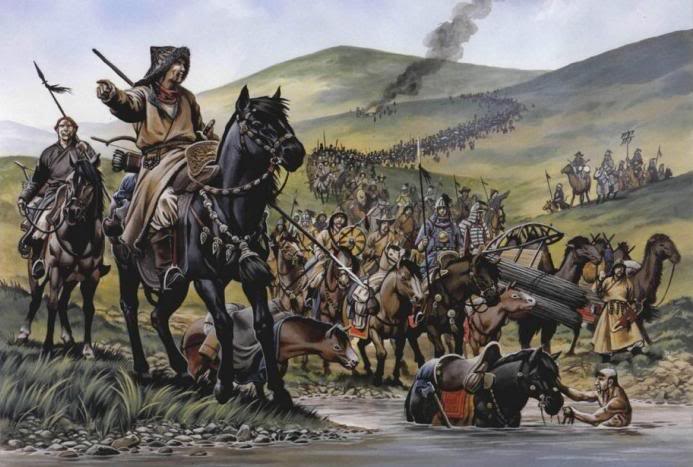 The End of Rome

As the Senone Army had already sacked Rome, they had an important decision to make. Marcus Furius Camillus had been declared dictator of Rome, and the decision to take him out or leave him in alone was yet to be decided. After much debate, it was decided by Brennus that Veii should be taken, to prevent any future Roman resistance. With the decision made, the Senones finished looting Rome, and marched northward to lay siege to the city of Veii. However, while they were on the way, a Roman Army of 5000 attacked them. Despite the setback, the Senones were able to destroy the army within [two weeks] and move on. However, the delay had allowed Marcus to fortify Veii far more than he would have without the attack presenting a daunting challenge to Brennus and the Senones.

By mid 388, however, after a restful winter, the Senone Army launched an attack on Veii. For eight days, the Romans held out, even with their rapidly dwindling supplies and high casualties. Finally, on the ninth day, the Senones smashed through the Roman defenses, and won the battle. During discussions, it was agreed upon that the Romans would give' the Senones a ton of gold, as well as weapons and food. The exchange took place the next day at noon, and as more and more gold piled up for the Senones, the Romans began to suspect treachery. Finally, Marcus Furius angrily accused the Senones of using weights that were too heavy. Brennus, angered by the accusation', took out his sword, and plunged it into Marcus' chest, yelling "Vae Victis!" as the sword killed his defeated opponent.

Because Rome was being destroyed by the Senones, the Roman Republic lost influence over the Etruscan, and would never be able to regain it. This quickly lead to The northern most regions of the Etruscan league to break off - without Rome keeping them in they wanted out. The remaining Etruscans had no way to reunify them, and simply let these regions go, letting them eventually merge with the Senone. Meanwhile, the burnt of the Etruscans were preparing for their lives to fall into chaos - without Rome, there was no real Etruscan government. Within a few weeks after the sack of Rome, it looked very much like the Etruscans would fall into war.

However, a group of kings, merchants, and intellectuals had other plans. They wanted to reform their government into a more centralized entity. The coalition set about this quickly, starting by establishing a Senate, composed of two houses, the lower house, a 47 member elected committee and the upper house, a 53 member committee appointed by the king every two years, made up of some of the wealthiest families in Etrusca. These two councils, on a biannual basis, elected a prince, to serve under the king. This system was based at least in part on the Roman system, but incorporated more democratic elements, and supposedly gave the rich less power. In addition, the Elected Prince and the King had to respect the decisions of the Senate, and could be forced to abdicate, although this never came close to happening. With a more centralized government, the Etruscans began to prepare for expansion.

As Rome collapsed, the Safineis began to attack the southern part of the area, with the goal of taking ovet the whole nation. The Senones, meanwhile, had no interest in taking over Rome, and decided to return to their homeland via Etrusca. The Etruscan government, worried about Safinei expansion, asked the Senones for help defeating the Umbrians. In exchange the Senones would get many valuable goods, as well as an alliance with the Etrusca. The Senones agreed, and their army of 11,000 met up with 12,000 Etruscan soldiers. The combined army marched into Umbria, and defeated the first attempt at resistance. The second attempt, while more formidable, was also put down within two days.

After these two battles, Umbria was in panic over the massive invading army. Their only chance lay in an army of 15,000 they were able to raise, and that number was likely exaggerated. The armies met only 35 miles away from the Etruscan border. The battle was long and brutal, lasting a full three days. Eventually, however, the Senones were able to launch an attack from the side, destroying the Umbrian army. This led to a six week campaign to finish off the Umbrian army. It was a quick success, and by the end of it, almost no further Umbrian resistance remained, at least in the northern part of the nation, though the southern part had to be dealt with.

The war in the south took almost two years to conclude and was devastating for both sides. The Umbrians used early guerrilla tactics, and although the Senones matched them in that respect, it was still devastating, particularly to the Etruscans. Very few major battles occurred during this time, and the fighting was mostly limited to areas in and around Umbrian villages. Eventually, the Etruscans would triumph, but not without more then a thousand casualties. In the end, the war was ultimately a success, and the Sennones left the Etruscans in peace, with plenty or supplies and currency. The war was arguably the main cause of the alliance between the Etruscans and the Senone, an alliance that would last thousands of years. It also set off a period of animosity between the Etruscans and Safinies, tensions that would eventually culminate in the Fifty years war.

After the Senones had destroyed the Roman army, the Safineis took advantage of the situation, and moved in from the south. The Safinei army met almost no resistance, save for isolated village militias and Roman army remnants. As the army advanced north, the fighting grew noticeably, but no full army was able to challenge them for the entirety, until they reached Rome at The battle of Rome. The force the Romans managed to come up with numbered about 3500, less then half the Safinei army. The Safinei army quickly destroyed' this force, and took control of Rome, effectively annexing the former Roman Republic. After this, the Safinei moved north to occupy the remainder of Rome to prevent Etrusca from taking over the region, and thus securing the land for many years.

With Rome solidly under Safinei control, the nation began to leverage their newfound influence across southern Italy. Their main reason for this was to limit Etruscan expansion, and be able to fight them in the event of a war. The Safinei began to start trading with the southern Italian states, dominating their economies to the point where they controlled them. As economic control began to take hold, so did political control, with the kings of southern Italian nations being essentially chosen by the king of the ,Safinei, and often unable to enforce their rule without Safinei intervention. By 370, these measures essentially reformed Southern Italy into a collection of Safinei puppet states. with annexation looking like a possibility. This reduced the Italian peninsula to two factions; the Safineis and the Etruscans.

After Safineim and Etrusca became the sole powers on the Italian peninsula, conflict was essentially inevitable. The war broke out in 380 BC, and ended in 330 BC. The 50 years war was long and brutal, and resulted in the deaths of about 11,000 people. With the exception of the final Etruscan campaign, the fighting was mostly confined to small border conflicts, with high casualties. During this phase of the war fighting was extremely unpopular and thus recruitment numbers were tiny. While neither side instituted a draft, both armies were known to pressure lower class men to fight. The only selling point for the war was low civilian casualties, but as raids became more focused on villages instead of armies, the war became even less popular.

After several decades of the fighting remaining on the border, the Etruscans launched the final campaign of the 50 years war. The campaign's goal was to wrench away what was formerly the Roman Republic from Safineim and put it under Etruscan control. The movement was initially successful, taking both Rome and Veii. Later, however, the attack bogged down, and the Safinei were able to mount a defense, effectively ending the campaign. While both sides experienced about the same amount of casualties, Etrusca managed to take large amounts of Safinei territory near Rome. The war was almost inconclusive, but it led to two more wars, the latter of which led to the takeover of Safineim by Etrusca0.

Following the alliance between Etrusca and the Senone, the Boii tribe began to feel threatened by the powerful alliance to the south. Thus, early in the summer 324 BCE, a massive army made up of 14,000 Boii, as well as Insubres and Vocontii launched an attack into Senone territory. The attack took the Senone completely by surprise, and pushed deep into Senone territory. The Boii Army was very successful at first, and destroyed the first attempt at Senone resistance. The Boii continued to push further into Senone territory, but there advanced was starting to slow under the disorganized but nevertheless effective Senone resistance. By December of 424 BC, the Boii had finally been stopped by a Senone army of 8000, but fighting was still intense for both sides.

After managing to fight the Boii to a standstill in the winter of 424 BCE, the Senones began to gather a larger army to compete with the still strong army of 11,000 Boii. While the Senones were able to raise 1000 troops to replace casualties, they wanted as many troops as possible for a counter offense. In order to use these additional troops, Senone diplomats were sent to Etrusca to ask for troops. Reluctantly, the Etruscans agreed to let the Senones use 3000 troops, boosting their strength too 11,000 troops. With this large force, the Senones launched a massive counter attack in the spring of 423. while the Boii expected this attack, they were still forced back out of Senone territory, and lost almost 3,000 troops. with this massive victory, the Senones continued to advance into Boii territory.

Faced with a massive opposing army and a decimated, dwindling army of their own, the Boii began to fall apart. While they were able to slow the Senone Advance by the fall of 423 BCE, there was no way to completely stop the relentless advance of the opposing army. The Senone, meanwhile, continued their advance, destroying the Boii army again and again. As the Boii got more and more desperate, many within the tribe began to consider surrender. Finally, by the summer of 422 BCE, the Boii finally agreed to surrender to the Senone, so long as they could keep their land and identity. The Senones agreed, so long as they could use Boii land for their own purposes. After working out the specifics, the Senone ended the war and returned to peace, this time with the Boii subjugated.

Retrieved from "https://althistory.fandom.com/wiki/4th_century_BCE_(Vae_victis!)?oldid=1492444"
Community content is available under CC-BY-SA unless otherwise noted.