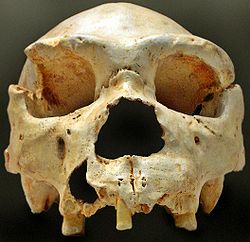 Looking across the sea that separated them from the rest of the world, Homo australi, Humali or Homo heidelbergensis , lived like they had for 370,000 years. Then, in 1606, a ship from a distant land arrived, an event that had not occurred since the arrival, and eventual fleeing of humans 320,000 years earlier. These people threatened the Humali's way of life and the entire species. The arrival of the British in 1658 did not help to ease them. After years of deliberation, the colonial powers decided to enslave and exploit the Humali. It was not until the anti-enslavement movement in the 1920's did the species get freedom. But, the exploitation still continued until 1985, when a Humali man, Eugasatr Raccinaen, won complete independence from any human nation, and today, is still run as the only Humali nation on Earth.

600,000 years ago, a new species in the genus Homo evolved from Homo ergaster in Africa. This new species, originally called Homo heidelbergensis, migrated out of Africa to Europe and Asia 450,000 years ago. They would live in these area's until the evolutionary transition from heidelbergensis to neanderthalensis and archaic sapiens. By 350,000 years ago in OTL, the species was extinct and the other Homo species were on the rise. But, in this ATL, the heidelbergensis managed to survive in south-east Asia, due to a rise in birth rate and the lowering of mortality rate in the area. Their continued living there increased attacks by modern humans, and caused their number the decrease. This and them being completely surrounded did not allow them to migrate at a fast rate. Finally after 38,000 years, the entire species left Asia, the reasons of which is still being debated today, and traveled by either boat or feet through what is now Indonesia. Following them was the now fast and mobile Homo sapien sapien, or modern man. This made the Heidelbergenis go farther south, until they reached the continent of Australia. Their new home gave rise to the now more popular and widely used scientific term, Homo Australis, or southern man. By this time, the sea levels had risen to such an extent that only small band of following Humans could arrive on the continent with the Humalis. These bands were the first Australian Aboriginals, and lived in the north until the full driving off the human species five thousand years later.

Retrieved from "https://althistory.fandom.com/wiki/A_Different_Man?oldid=1649392"
Community content is available under CC-BY-SA unless otherwise noted.