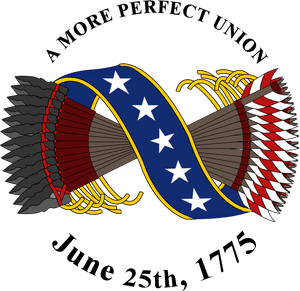 What if the United States allied with the Iroquois Confederacy before the Battle of Quebec? What would America be like if Canada had never been an independent country and the First Nations were treated more like equals from the outset of the Republic? That is the premise of A More Perfect Union.

During the Revolutionary War, the Native American tribes of what in our timeline, became the Eastern United States, Ontario and Quebec, were largely split in their support for the British or the Americans. The Iroquois were the only ones who had any kind of support for the Crown among its leadership, but by 1775 they were already negotiating with the Americans. Many of the Founding Fathers were supporters of the principles of government drafted in the Great Law of Peace of the Iroquois Confederacy, and Ben Franklin had used it as a model for his own plan for a continental union in 1754, the so-called Albany Plan.

Had the Iroquois sided with the Americans outright, rather than splitting their Confederacy as they did in OTL, American history would be very different. Not only in terms of the manpower the Iroquois could have brought to the Patriot's cause, but how such an alliance would shape American culture for the next two centuries. This timeline is not trying to envision a Perfect America/Canada, just one that is, in many ways, a little better than the one we got.

In May of 1775, Ethan Allen and Benedict Arnold led the capture of the British fortress at Ticonderoga, and the British and American forces began eyeing the possibility of an invasion of Quebec. As the British prepared their defenses guarding the Great Lakes and the St. Lawrence river valley, they rallied 15,000 French-Canadian militiamen and 8500 warriors of the First Nations loyal to the Crown. However, the militia's complement of mostly French Canadians and tribal leaders were regarded as lukewarm in their loyalty to the British, and Pontiac's War of 1763 had soured most Indians' opinions toward all whites.

Six Nations of the Haudenosaunee (Iroquois) were already negotiating with the Americans, but the rest of the Great Council was split as to whether they should side with the Crown or the Congress. In June of 1775, George Washington tasked Benjamin Franklin to meet with the Great Council at Onondaga and negotiate to bring the Iroquois into the war on the side of the forces of the Second Continental Congress. Franklin, a long time scholar and at times advocate of the principles of government of the Iroquois Confederacy spent several weeks with his translator meeting with the leaders of the Council. He was authorized to negotiate on behalf of the Congress, and made assurances to the more hesitant tribes, that if they contributed their forces to the Continental Army, they would be recognized as an equal State and their territory guaranteed. At the final meeting Franklin added a 14th arrow to a bundle of 13 the envoys had brought with them, and asked Thayendanegea (Joseph Brant) if he would try to break the bundle. Brant, the last holdout on the Council gave Franklin his support, and the Iroquois agreed to side with the Colonies against Great Britain, fielding around 1500 more men to the Americans that would have gone to the British.

In December of 1775 the Continental Army dispatched a two-pronged attack with 3000 men under Maj. General Richard Montgomery moved to take Montreal through the Richelieu River valley, while 1050 men under Arnold would march up through what is now the state of Maine to take Quebec City. Before crossing into Quebec proper 1500 Iroquois warriors commanded by Colonel Joseph Louis Cook, (Akiatonharónkwen) linked up with Arnold's force. Prior to the actual invasion, propaganda letters from Congress, the New York Provincial Assembly, and the Iroquois Great Council were circulated throughout Quebec, promising liberation from the British.

The Battle of Quebec was hard fought, but with help from the Iroquois the Americans were victorious. Taking Canada eliminated any possibility of the British using it as a base to send reinforcements to New England and New York, and was an important factor in turning the French to the American cause. General Montgomery fell during the battle, leaving Arnold to command the whole of the American offensive, propelling him to national prominence. The performance of the Iroquois surprised many in Congress, particularly the actions of Joseph Brant's irregular Volunteer fighters who destroyed British power stores as the American attack began.

The battle of Quebec secured an American foothold in upper and lower Canada, and the Iroquois involvement began a change in the attitudes of many whites toward the First Nations.

Retrieved from "https://althistory.fandom.com/wiki/A_More_Perfect_Union?oldid=1614387"
Community content is available under CC-BY-SA unless otherwise noted.