The Abbasid Caliphate (Arabic: اَلْخِلَافَةُ ٱلْعَبَّاسِيَّةُ‎, al-Khilāfah al-ʿAbbāsīyah) is a theocratic empire located in North Africa and the Middle East. The Caliphate is bordered by the Empire of Georgia to the north, the Gurkani Sultanate to the east, the Kingdom of Alodia, the Kingdom of Ethiopia, the Funj Sultanate, and Oman to the south, and Morocco and Spain to the west. The seat of power for the Caliphate is Damascus, helmed by the Abbasid dynasty, a house whom descended from the Islamic prophet Muhammad's uncle, Abbas ibn Abd al-Muttalib. As such, it is considered to be the third Caliphate to succeed the prophet Muhammad, following the Rashidun and the Umayyad. The official language of the Caliphate is Arabic, with instances of Classical Arabic being used in it's authoritative offices while minor languages often spoken include Armenian, Berber, French, Georgian, Greek, Latin, Spanish, and Persian. The population of the Caliphate in 1580 was 21,000,000.

Founded during the final years of the Pirate Wars, the Abbasid Dynasty under Caliph al-Mustanṣir II would have their rule re-instated after the collapse of the Hafsid Empire. He would go on to become the first Caliph of the restored Abbasid Caliphate, ruling until 1504 before his son, Caliph al-Maālīk, would ascend the throne after al-Mustanṣir II's death. Caliph al-Maālīk would set the bedrock for the Caliphate's future period of innovation, finishing the construction of the Great Library of Alexandria and raising a successful jihad against the Kingdom of Ethiopia and the Zaydiyyah Imams of Yemen, annexing the latter in the process. Caliph al-Maālīk would be succeeded by his step-son and military general Caliph al-Abdūkʿrāhman, who would go on to pave the path for a second Abbasid Golden Age after re-asserting authority over the Levant and Lower Mesopotamia following his myriad of conflicts and conquests in the Middle East.

Following the reign of Caliph al-Abdūkʿrāhman, the House of Rūm would sieze authority over the Caliphate, establishing the short-lived Abbasid-Rūm Caliphate, a personal union between the Abbasid dynasty and the House of Rūm. Overtime, however, the power of the Caliph would dwindle under stagnation in the Court, often leading to the moments where the Grand Vizier and the Ulema held more power than the Caliph did. This power-struggle would culminate in the Sixth Fitna, which dissolved the Abbasid Caliphate and restored the Rashidun Caliphate in 1615.

In 146, the Hasfid Empire would collapse under a series of revolts and rebellions often regarded as the "Pirate Wars". After the death of Sultan Ahmed III, Caliph al-Mustanṣir II, who had reigned as Caliph in the Mamluke Sultanate prior to it's collapse and had spent nearly six years imprisoned, would be re-instated as Caliph of the restored Caliphate under the Mandate of Tunis in 1497. The mandate would ensure the restoration of the Caliphate with the aid of Janannid Sultanate of Ifriqiya, which had recently been established in the former capital of the Hafsid dynasty.

Caliph al-Mustanṣir II's reign would be defined for it's numerous reforms to the iqta' system, including the re-organization of the Ulema to serve as a legislative power while the Grand Army would be founded under the leadership of Abu Bakr al-Baghdadi, a military general and mamluke aristocrat of the former Mamluke Sultanate. Caliph al-Mustanṣir II would also attempt to de-emphasize the authority of the Order of Taymiyyah, which had remained a powerful clergy in Egypt since it's revolution in the mid-14th century. These attempts would mostly fail due to the authority the Order held over much of the military at the time.

In 1500, Caliph al-Mustanṣir II would declare war on the Spanish Empire in an attempt to sieze the territory of Rif. The Caliphate would be supported by it's ally, the Wattasid Kingdom. Although initial success had been seen, a devastating blockade would be established across the coast by the Spanish Empire, cutting exports in the region and limiting the output by the African territories. Coupled with the Celtic Confederacy's invasion of Morocco, the Grand Army would face continued defeat at the hands of the Spanish, leaving much of the army to retreat back into Tlemcen.

In 1504, Caliph al-Mustanṣir II would die due to a heart attack, and with it, the Rif War would end upon the ascension of his son, Caliph al-Maālīk. Caliph al-Maālīk would openly declare during his first month in office that the war proved too great on the supplies of the Caliphate, and as such would necessitate a period of re-organization. After sending the renowned Abbasid diplomat, Suleiman "The Negotiator", to the Spanish Empire and ending the conflict against Europe formally, Caliph al-Maālīk would turn his attention towards the restoration of intellectual centers across the Caliphate, including the reconstruction of the Great Library of Alexandria (known as "Caliph al-Maālīk's Auditorium" during the time) in 1506 and introducing the printing press in 1507 respectively. During this time though, the printing press only held a theological or ideological purpose, such as printing the Qu'ran or the works of Ibn Taymiyyah.

Expansion and the House of Rūm

Main articles: House of Rūm and Unification of Arabia

One of the most crucial compositions in the early Caliphate was Samir al-Azad's 476-page manuscript titled إمبراطوريات الشرق (Latin: Imperia Orientalem; English: "Empires of the East"), which detailed the objective routes and locations of the major kingdoms of East Asia while also providing commentary on the society and culture there. This would prove benefical to the various merchant dynasties of Egypt and Hejaz, as it would provide instructions for travel in Asia and expand trade into the Spice Kingdoms of Ayutthaya and Dai Viet.

To better expand trade in the Indian Ocean, Caliph al-Maālīk would declare war on the Zaidiyyah Imamate of Yemen in an effort to secure the profitable port cities along the coast. This would culminate in the Red Sea War, which saw the Empire of Ethiopia invade the Caliphate in support the Zaidi Imamate, marching as far as Jeddah, while support against the Caliphate would export in the form of Portuguese and Spanish fleets blockading Caliphate ports in the Red Sea. The war would culminate in the Treaty of Aden, which saw the annexation of Yemen and the ceding of Aden to the Empire of Ethiopia. The end of this war would expand the Caliphate's authority in the Indian Ocean trade as a whole, with merchants travelling as far as Japan to trade goods and spices.

Shortly after the war, Caliph al-Maālīk would suffer pneumonia, dying days after contracting it. The death of Caliph al-Maālīk in 1521 would leave a short succession crisis over the position of Caliph due to his lack of male heirs. His eldest daughter, Aisha al-Abbas, had been married to the House of Rūm's Mehmud ibn Abdukrahman al-Rūm, a military general that lead the war in Yemen and an anappointed scholar in the Court at the time, in the prior year. Due to Caliph al-Maālīk's other daughters not have reaching the age of maturity, through the terms of succession, Mehmud ibn Abdukrahman al-Rūm would be appointed and recognized as Caliph, taking the regnal title of Caliph al-Abdūkʿrāhman and establishing a dynastic union between the Abbasid dynasty and the afformentioned House of Rūm.

Although not a lot of information about the Caliph al-Abdūkʿrāhman's early reign exists due to the Great Fire of Cairo in 1541, it is recorded that he began re-instituting educational importance in the Caliphate by converting Caliph al-Maālīk's Auditorium into a formal academy, to better increase translation efforts and to expand the role of the printing press, which had only been used for officiate purposes up until then. In 1521, following the discovery of the Gospel of Judas, referred to at the time as the "Gnostic Gospel", by Mamluke Soldier Abu Hakim al-Edris, the Caliph to fund an archaelogical department to seek and discover rare artifacts in the Middle East, which would culminate in the discovery of the Rosetta stone (although it's purpose had not become apparent until much later), the Veil of Veronica, the Ebla tablets, and a variety of other relics and treasures that would be preserved in the Citadel of Cairo, and later, the Citadel of Damascus.

In 1528, Caliph al-Abdūkʿrāhman would lead a war against the Imamate of Oman, conquering it within a matter of weeks and expanding the power of the Caliphate over the Indian Ocean by taking advantage of the various ship-building ports along the Gulf of Persia. This would further expand the Caliphate's across the Arabian peninsula, with ancient roadways being updated to better facilitate trade and migration between Hejaz and Oman. This would also lead to an influx of Ibadi scholars gravitating toward Egypt, with many taking residence in Alexandria and Cairo. This would also further aid in the translation effort, since many of the Ibadi scholars at the time spoke many different languages as a consequence of their merchantile state.

The aggressive expansion of the Caliphate would come full-circle when Caliph al-Abdūkʿrāhman would invade the Empire of Georgia in late 1531, with the goals of expanding the authority of the Caliph into the Levant and Mesopotamia. This initiatal invasion would culminate in a series of conflicts between the Abbasids and Georgia, and furthermore, Byzantium, which would last nearly 70 years. With reported deaths estimated in the millions, the Abbasid-Georgian War of 1531-1536, often referred to by Arabic historians as the "White Jihad", is likely one of the earliest modern conflicts to have extensive casualties, with more than 350,000 death militarily, with estimated civilian casualties being nearly doubled at the end of Abdukrahman's campaign in Syria.

The first Abbasid-Georgian War was important for a number of reasons that were indirectly tied toward the longevity of a de facto united Islamic state. For one, it saw the ceasing of Sunni-Shia hostilities toward the goal of defeating Georgia, leading to a short-lived alliance with the Safavid dynasty in Persia that lasted until the Abbasid conquest of Iran. Secondly, it was one of the first major conflicts between empires that were built off of gunpowder technology that had circulated throughout Europe in limited capacity in the 15th century, ultimately leading to a number of military developments in the region and one of the first bastion forts to be built in the Middle East. The war also proved the inefficiency of thick-armor in battle, with the musket's introduction in Egypt leading to a myriad of successful campaigns for the Grand Army. Thirdly, the result of the war would pave way for another Abbasid Golden Age and the later unification of the Arabian peninsula. The war would end in 1535 with the Treaty of Jerusalem, which would be later broken with the continuation of war in 1565.

The Caliph (Arabic: خَلِيفَة‎, Khalīfah) holds primary executive authority over the Caliphate, and is considered a politico-religious successor to the Islamic prophet Muhammad and a leader of the entire Islamic community. This authority is hereditary, being passed through patriarchal succession in the Abbasid dynasty. The Abbasid dynasty claims descent from the prophet Muhammad's uncle, al-ʿAbbās ibn ʿAbd al-Muṭṭalib, and as such, have been supported by both Sunni and Shia. The position of Caliph acts, in a Western sense, as a monarch and patriarch of the state, and generally held jurisdiction over all matter's of the judiciary and the Grand Army. 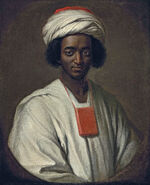 The Grand Army laying siege to Damascus, 1531
Add a photo to this gallery

Retrieved from "https://althistory.fandom.com/wiki/Abbasid_Caliphate_(Merveilles_des_Morte)?oldid=1758396"
Community content is available under CC-BY-SA unless otherwise noted.