The following was written by the departed user AirshipArmada

General Charles Lee adopted a policy of guerrilla war, with the American base of operations in the west (where modern day Cincinnati now stands). Lee conducted harassment attacks against the British only where they were vulnerable. Lee also attacked native Loyalists ruthlessly.

General Charles Lee did not seriously consider conducting a siege on Boston because he knew he had insufficient troops to force the British out. Henry Knox proposed recovering the cannons from Ticonderoga and force the British from Boston by placing the cannon on Dorchester Heights but Lee rejected the plan. Lee believed the Continental Army must remain mobile and "liquid", in his terms, and thought that artillery would slow an army down and cause it to develop along lines which were just too conventional.

Lee realized that New York was strategically important, but he also realized that it would be completely impossible to hold. Long Island and Manhattan were surrounded by navigable waterways and the English could make an amphibious landing at any point. New York was also very strongly Loyalist, so the locals were more likely to support the British than they were to support Lee's troops. In summer of 1776, Lee ordered Nathaniel Green to take the city and burn it to the ground, thus denying the enemy valuable resources. Green gave the inhabitants two days notice before he set the city ablaze. Over two thirds of the city was destroyed. The event was extremely polarizing in American politics: Revolutionaries viewed it as a regrettable necessity, Loyalists viewed it as an unforgivable act.

Despite the destruction, General Howe and Admiral Howe used New York as a base of operations when they arrived in America. They were also able to recruit large numbers of Loyalist to serve along side the British army from here.

Indian War in the West

Lee originally established his headquarters west of the Alleghenies but was beset by British-lead indian forces there. Lee was able to persuade the Oneida and most of the Mohawk tribes to the American cause, but the rest of the Six Nations sided with the British. The engagements between Colonel Butler and General Lee, with their rebel and Indian forces, turned out to be some of the most brutal the continent had ever seen.

When Burgoyne began to move south from Canada, Lee decided to move his HQ back east to be closer to the action there. This move was generally perceived to be a defeat of the Revolutionary forces by the Indians under Butler and Joseph Brant. Lee's few Indian allies abandoned him shortly thereafter.

A small pox epidemic was raging across America at the time of the revolution. In OTL Washington placed great stress on inoculations but still a quarter of his forces were incapacitated due to the disease at any given time. Charles Lee was renowned for his poor hygiene and is unlikely to have placed any great stress on camp cleanliness or small pox inoculations. As a result a far greater number of revolutionary would have suffered: at any given time from one third to one half of Lee's forces were not combat ready because they were simply too sick to fight. Lee's more western base also spread the disease westward and many native peoples suffer earlier than in OTL.

The British controlled the ports and major cities while the Americans controlled the countryside. The British had two goals: to gain control of the Hudson and surrounding areas, and to destroy the Continental Army. They found it easy to achieve their first goal and impossible to achieve their second. American forces conducted harassment attacks, sabotage, and small scale surprise raids against the British. The English found this sort of war very frustrating and expensive. Lee's strategy was a military success but a political failure. The rebellion was popular in rural areas and in "wild country". Support for the revolution, however, plummeted in urban areas and in the South. Because America did not form a conventional army or conclude any large scale field victories France was unwilling to financially aid the rebellion.

As in OTL, Howe took Philadelphia (but this happens sooner in this time line because there is no Battle of New York or its surrounding engagements). When Burgoyne moves south from Canada, Howe was ready to move north to meet him (as planned in OTL). Congress was becoming increasingly frustrated with Lee's tactics and had hoped for a major Braddock-style battle against the Canadian troops. Lee, however, only conducted harassment attacks on Burgoyne's troops and avoided any sort of Saratoga style battles. Gates, along with Benedict Arnold, argued that a more traditional and "noble" army was needed to serve the revolutionary cause. Congress eventually agreed and duly notified Lee that he had been demoted. General Arnold was named the new Commander and Chief and a new army was raised for his use (new armies had to be raised every year due to the limitation of one year enlistment periods). Rather than serve as third in command, Lee resigned from the army. The embittered Charles Lee supplied crucial military intelligence to the British in exchange for a pardon. Arnold rushed his unready forces north to meet Howe's troops; there the Americans were soundly defeated and Arnold surrendered. 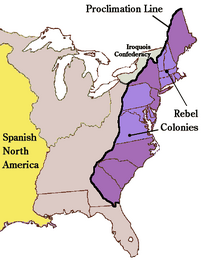 After the failed American revolt, the colonies of New York, New Jersey, and Georgia were called "The Loyal Colonies". This courtesy was soon extended to include South and North Carolina and Maine. The Loyal Colonies received privileges from Britain long before the Rebel Colonies did.

The British attempted to enforce the Proclamation Line of 1763. Settlers who crossed the line without the local governor's consent were considered to be outlaws or rebels, and they gave up any English rights or protections. A large number of settlers, never the less, did move into the Indian regions following the war.

NEXT: The Second American Rebellion

Or return to: Braddocks Expedition

Retrieved from "https://althistory.fandom.com/wiki/American_Revolt_(Washington_Shot_at_Murdering_Town!)?oldid=1488036"
Community content is available under CC-BY-SA unless otherwise noted.