The morning of September 1st (722AUC(-31)) at Activm in Greece, Marcvs Antonivs and his staff were approached by an elderly Alexandrian calling himself Hakizimana.

The man said that he had traveled with all haste from Egypt, and told Antonivs that Agrippa would arrive for a naval battle the next day. Antonivs and his staff were willing to believe Hakizimana enough to make such preparations. The next day, amid fog, Antonivs and Cleopatras’ navy set out and managed to take Agrippa by total surprise. Octavian’s fleet sailed out to assist Agrippa, but Agrippa was killed with the sinking of his ship, his fleet was decimated, and Octavian’s made to retreat back to their camp near Nicropolis. Elated, Antonivs led an attack on land to isolate Octavian’s camp from food and water, but for several days Octavian refused to be lured out. When he finally did, he beat back Antonivs while also causing several client kings under him to defect in the middle of the battle. The stalemate was renewed as Octavian tried to come to grips with the loss of Agrippa. As months passed, skirmishes attained nothing but losses for both sides. Octavian was not only losing support in Rome but his troops, who had not actually been paid in years, were starting to become increasingly unwieldy. Disease and rotting ship hulls were also taking heavy tolls on morale and strength, several lesser generals and admirals on both sides were lost. In December after a number of the Greek islands Agrippa had captured were convinced to return to Antonivs, Octavian fell ill (though likely to recover) and was forced to try a diplomatic end to the civil war. Despite very vocal objections from Cleopatra, the third of the Senate that had fled to Antonivs, and Antonivs' staff, Antonivs agreed to negotiate a solid peace; not the least because of his own failing spirit to command, his willingness to trust Octavian one last time, and the necessity of going back to Asia Minor to re-conquer Paphlagonia, Commagene, and several Greek stations that had rebelled (the Mauretanians had also defected to Octavian in early December).

Peace was made on December 27th, where Imperator Cæsar of ‘Republican’ Rome, its Provinces, and Allies, and Autocrator Antonivs of the Empire of the East, (also known as: The Great Ptolemaic Kingdom/Empire; Antonivs’s Eastern Empire; The Empire of Egypt) recognised each others’ territories and drew the agreed borders (Mavretania and Africa remained Western client kingdom/territories), though Octavian still refused to recognise Cæsarion as Cæsar’s true heir. Upon returning to Rome Octavian held a month of mourning for the loss of Agrippa and took ward of Agrippa’s only child, the five year old Vipsania Agrippina.

733(-20) Octavian dissolved the province of Africa Nova (Nvmidia) and combined it with Mavretania, placing his good friend Jvba II as its king to rule as a client.

733-45(-20--8) Octavian and Carico invaded the Cantabri in northern Hispania to resume the conquest of the peninsula. Minor engagements would continued down to 748(-5).

735(18) The Astures joined in with the Cantabri resistance. Gaius Sosius, one of Antonivs' most prominent generals, dies at the age of 78.

738(-15) Unrest in EE allied Thrace due to the proximity of Rome. Antonivs, by sending the general Akakios Mnason of Asia conquered the kingdom. 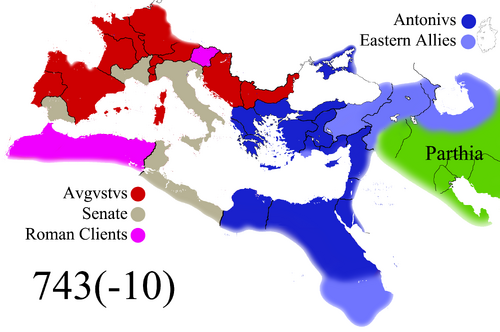 By this time the Eastern Empire had consolidated and was rich. Much of the ‘defected Senate’ was settled in Alexandria for if they returned to Rome most could expect to be executed (though some returned and received pardons). Alliances with Media and Meroe(in Nvbia) were formed, and there was (tense) peace with Parthia after a number of failed invasions which only reduced Antonivs’s willingness to fight wars. Hakizimana had become an integral part of Antonivs’s staff, but died just two years after the Peace of Activm. Antonivs (now 73) and Cleopatra (now 59) still reigned, but Antonivs was on his deathbed in Sextilis 743. Cæsarion (now 37) was poised to take up Antonivs' title of Avtocrator while the rest of Antonivs’s Roman children were living full lives in Roman territory.

Rome meanwhile, was now surging in power from a late start. Almost 10 years earlier a young military engineer named Carico had demonstrated to the Senate and later Cæsar Octavian his invention and extensive applications of the Vaposcvrr, Index, and Alesaliti. At the time, Octavian’s control of Rome and the military was wavering and the economy was heading for collapse; he had lost faith in his ‘hasten slowly’ motto. Carico’s economic applications of his inventions, along with continued new policies from Octavian, were now bringing Rome to soon surpass the Eastern Empire in prosperity and potency. Assassins were never sent by Octavian to the Eastern Empire as it would guarantee a continuance of the war he previously could not win. Octavian also made strong efforts to prevent the Ptolemies from marrying back into Roman families.

When Avtocrator Antonivs died on Sextilivs 1st of 743(-10), Octavian announced that the Peace of Antivm was void and led with Carico a swift attack on Greece from Dalmatia. Cleopatra, never one to trust Octavian, and ensured to station large garrisons and fleets in Greece, but the expertise of Carico and other generals in the field managed to defeat many and even cause Thracia to rebel and join Rome as a client kingdom in 745(-8). 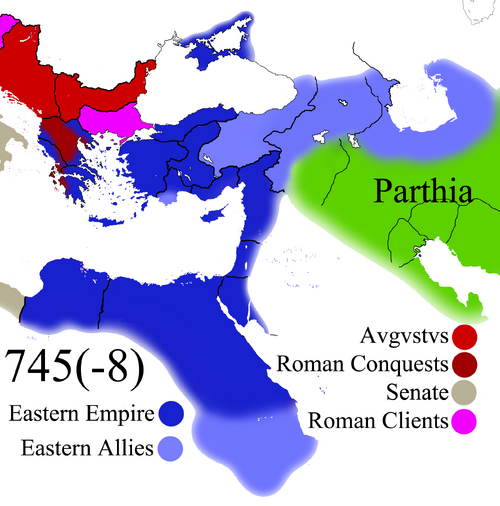 Fierce naval battles in the Aegean and eastern Mediterranean followed, in 746(-7), Antonivs’s son Antyllvs (now aged 40) was killed in a sea battle while transferring with troops to Cyprus. The governor there then defected to Rome. Soon after, Cilicia defected to Rome against Ptolemy Philadelphos as a client kingdom as well. In 747 Carico began organizing a landing in Ivdea, but the ships stationed in Cyprvs were destroyed by the governor, defecting again back to the East. Until '49 Carico and Octavian were busied with defanging the East’s armies in Anatolia and Cyprvs. In 749(-4) Carico managed his landing, taking Hierosolyma (Jerusalem) by the start of 750, but there the fighting did not ease, and it would be another 4 years before Alexandria fell and the Eastern Empire was no more. It was also noted that in Ivdea Carico milled about searching the countryside, telling his men only “a baby”. It was strange behaviour.

Media abandoned its alliance with the Eastern Empire in late 750(-3) as Carico led armies north against Philadelphos (aged33) and Alexander (aged44) to victories. Carico captured Philadelphos in December 753 and defeated and killed Alexander in February 754.

And Alexandria did fall. Octavian arrived in Ivdea in Ivlivs 753(0) and began organising a drive through Egypt’s strong defences in Sinai. The attack began in late Sextilvs and progress was excellent under Octavian’s leadership until Cæsarion confronted him outside Alexandria and nearly routed Octavian but for the timely arrival of Carico from Syria with reinforcements. Together Carico and Octavian defeated and captured Cæsarion and Alexandria on September 23rd of 754(1) coincidentally Octavius’ birthday. In a grand ceremony of the same day, Carico presented Alexandria and Ægyptvs to Octavian as a grand gift. Octavian toured the city, and later had his Triumph in Rome in the summer of 755. Unfortunately Cleopatra and most of her attendants had all committed suicide by Asp just as Alexandria fell; and Cæsarion also managed to kill himself later in October 754, but Philadelphos was paraded in Rome. Octavian then gave himself the title Avgvstvs, while also renaming September to Avgvstvs. 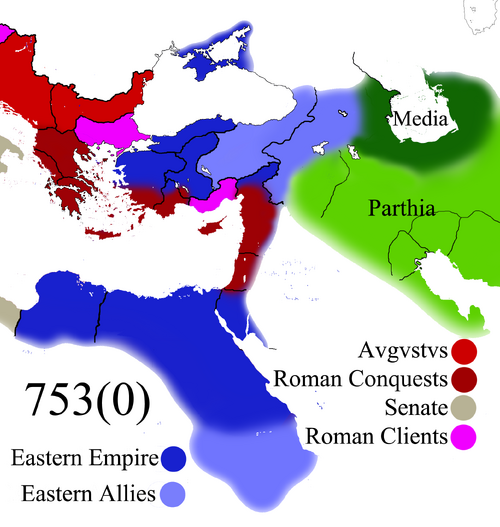 Now named Avgvstvs, he took the title of Pharaoh of Ægyptvs as well, and barred any Roman official from it, including (especially) Carico, after his shipping of the Alexandrian Libraries in 754(1) caused massive uprisings for the next 30 bloody years. Carico would later open up Ægyptvs during his reign. 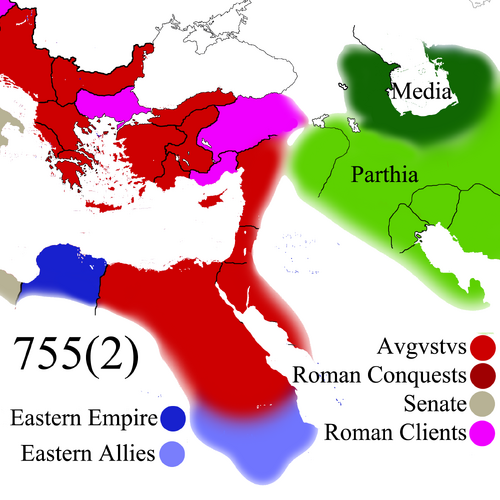 Meroe, still very loyal to its alliance with Egypt, defeated several Roman expeditionary forces in 756, and was soon left in peace. Meroe would be the defenders of Nubia for another 300 years. 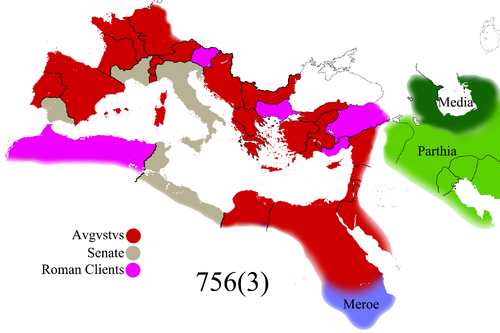 Retrieved from "https://althistory.fandom.com/wiki/Ante_%C3%86tas_Briani_(%C3%86tas_ab_Brian)?oldid=1743993"
Community content is available under CC-BY-SA unless otherwise noted.