The Kingdom of Arkansas (le Royaume d'Arkansas) originated as the southwestern portion of the French territory of Louisianne, a province in New France. It is a member of the League of North American States.

The name Louisianne was first given to the territory by the French explorers after King Louis XIV in 1682. The French claimed a vast territory covering much of the Mississippi River drainage basin. The first capitals were the cities of Mobile and Biloxi, now in the NAC province of Pensacola.

In 1715, Japan captured the entire territory of Louisianne. The capital of Louisianne was moved from Biloxi to New Orleans. Louisianne became Luixian-dô and was subdivided into 5 provinces:

The province of New Orleans contained most of the major French settlements, and was given special rights, essentially a prototype of today's Autonomous Regions. The bulk of Japanese settlement was in the provinces of Misuri and and Arukansa. In 1738, the capital was again moved to Kansagawa.

In 1765, following the end of the First Global War, Luixian-dô was lost. The eastern half (consisting of all territories east of the Mississippi and north of the 31st parallel) was ceded to Britain while the western portion was retroceded to France, who returned the capital to New Orleans. Rebellions among the Japanese inhabitants of the former Misuri and Arukansa provinces led to the Misuri Rebellion (1771-1774) which resulted in northwestern and central Louisianne being granted independence as Misuri. Misuri consisted of the former Misuri Province and the western part of Arukansa Province, plus the areas surrounding the cities of Kansagawa and Misurigawa, minus most of the eastern half of the old Misuri province (which became Minnesota).

Louisianne split from France during the French Revolution, when it sided with the royalists, based in Canada. In 1830, the Kingdom of Louisianne was declared, in personal union with Canada and (nominally) France. Louisianne tended to be governed as a de facto colony of Canada, and as a result was little developed. Louisianne was subdivided into two Duchies, the Duchy of Arkansas and the Duchy of Minnesota. The Duchy of Minnesota tended to be more closely aligned with Canada than with Arkansas, though remaining nominally in union with Arkansas. By the late 19th century, the two duchies were effectively independant, and in 1872, at the same time of the signing of the Treaty of Understanding and Friendship, Louisianne was formally dissolved and replaced with the Kingdoms of Arkansas and Minnesota.

Arkansas began gaining greater independance from Canada in the early 20th century, cumulating in 193? with the passage of the Arkansas Succession Act, which decreed the abolition of Salic Law within Arkansas, giving Arkansas a different succession law from Canada and Minnesota. Thus, when King Pierre I of Canada, Minnesota, and Arkansas died, his daughter became Queen Marie I of Arkansas, while his 1st cousin once removed became King Jacques I of Canada and Minnesota.

Marie's granddaughter is currently on the throne as Queen Marie II. 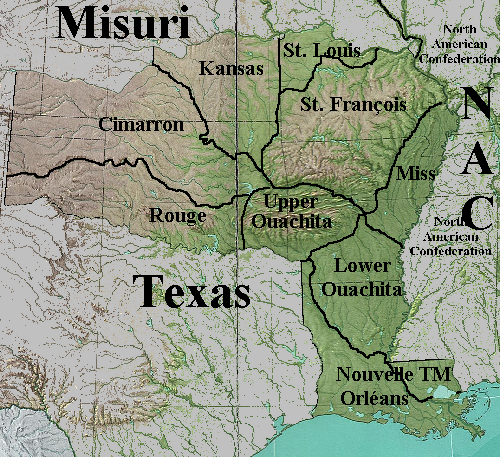 Arkansas is bordered by the North American Confederation to the east, Misuri to the north, and Texas to the west.

Arkansas is divided into 10 provinces, capitals in parentheses

Kings of the Frances

Kings of Canada, Arkansas, and Minnesota

King of Canada and Arkansas

Kings and Queens of Arkansas