Aruta is a member-state of the Federation of Japanese States in North America, one of the founding members, as well as a member of the League of North American States

In 1701, Japan joined the War of the Spanish Succession, seeking to increase her holdings in North America. At the end of the war, Japan gained the French territory of Louisianne and the Spanish colony of Alta California, which became Aruta in Japanese. At the time, it included all of what is today Aruta, minus the province of Baxa, but including much of northern Mexico and most of what is today the state of Japanese Texas in the Federation of Texas. Japan also laid claim to Baja California beginning in the 1730's.

In 1752, a rebellion began in Aruta, seeking greater sovreignty for Aruta. In 1754, the leader of the rebellion, one Tokugawa Ichirô, a relative of the Tokugawa who had once attempted to install himself as ruler of Japan instead of Toyotomi Fideyori. The rebellion spread to other Japanese colonies, and other nations soon sought to take advantage of Japan's troubles, setting off the First Global War. The rebellion was short-lived, resulting in the creation of the Federation of Japanese Nations. The First Global War, on the other hand, was far longer. At the end of the war, the trans-Coloradan territories were lost to Spain, but Baja California was confirmed as Japanese. Japan also lost her northern territories, including what is now Oregon, previously considered a part of the Province of Yûzen, and Areska-dô. Areska would not be regained until the Second Global War.

Aruta shares borders with the nations of Oregon to the north, Misuri to the east, and Mexico to the southeast.

Aruta's border with Oregon is defined by the 42nd parallel from the Eastern Ocean to the Snake River, at which point it follows the Snake River to the Continental Divide.

Aruta's border with Misuri is defined by the Continental Divide

Aruta's border with Mexico is defined by the Colorado River. 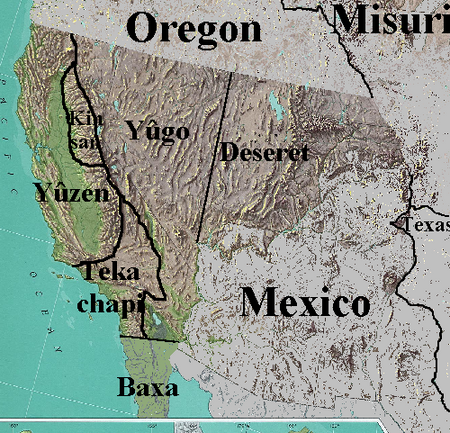 Initially, Aruta formed a single province, Aruta no kuni. It was subsequently divided into two halves, Yûzen (roughly "Near Aruta") in the west, and Yûgo ("Far Aruta") in the east. After the discovery of gold, northeastern Yûzen was broken off to form a new province Kinsan (Gold Mountains). Southern Yûzen subsequently split off to form Tekachapi Province. Deseret (Dexeretto) is the newest of the provinces, having been split off of Yûgo to house religious refugees from the North American Confederation. They were permitted to settle in that region in the hopes of increasing its population, and providing a populated corridor between Aruta and Misuri. Deseret has grown considerably since its creation, with a highly eclectic mix of races, from Asia the Pacific and Europe, totalling now in the millions.