The regions of Australia, New Zealand, the three subregions of Melanesia, Micronesia, Polynesia, are the far flung islands of the Pacific are commonly referred to as Oceania or Oceanica. On September 26, 1983, the region suffered a fair amount of nuclear strikes of Soviet origin due to its presence of U.S. military installations. The strikes included the cities of Perth, Melbourne, and Sydney in Australia, several military installations and the capital of Honolulu in the State of Hawaii, and the islands of Guam, Wake, Kwajalein, and Johnston - all which were strategic bases for U.S. forces in the Pacific. However, majority of the island nations were not targeted by Soviet missiles during Doomsday, so these island nations resorted to old customs of fishing and communication with nearby islands which greatly aided the survival of these nations. Other formed unions such as the Commonwealth of Australia and New Zealand, in which other island nations joined the commonwealth or are free associated states. The ANZC is considered one of the world's superpowers after Doomsday.

Location of the CANZ and integral territories. 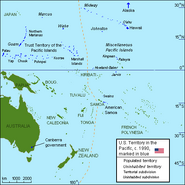 Territories administered by the American Provisional Administration in 1990.
Add a photo to this gallery
Retrieved from "https://althistory.fandom.com/wiki/Australia_and_the_Pacific_(1983:_Doomsday)?oldid=1602156"
Community content is available under CC-BY-SA unless otherwise noted.