Hello, and welcome to the fourth installment of the Axis vs Allies series. The last few games, while they were successes, only one did finish and the UN pages and Diplomacy pages were not used very often. I hope to change that this game. Also, I hope all you guys know what I'm getting on with Axis vs Allies, Axis vs Allies: Reloaded, then Axis vs Allies: Revolutions :).

Now, to the game: The year is 1933. Hitler has just taken power in Germany. The world is still in a depression. Unemployment is high. Choose a nation, and command it to success and glory. Will your nation become a superpower? Or will it be crushed? Make no mistake; war is coming ... with all its glory ... and all its horror.

It is never too late to join.

1. We are going to limit the nations count to one, as that when a person gets two countries; they usually neglect the other one.

2. The Golden Rule: Treat others as you want to be treated . . . IS NOT IT! But you must be plausible.

3. Nuclear programs may start in 1940.5 We will use Random.org to determine who starts it first and who gets it. Also, it will take at least four years to develop nukes if you are one of the “Big Cheese”. (US, Germany, Soviets, Japan).

5. Make a profile on the Diplomacy Page.

6. You can be an occupied nation and declare independence.

7. We will have resolutions/stuff when the UN is created at United Nations Page.

11. As for nuke use, the last game was ruined because of implausible use of nukes (admittedly, I was one of them), so while I won’t be making a “rule” on nuke use, USE YOUR HEAD! And moderators will be able to roll back edits.

A few general rules concerning the map as to ensure "success:"

Except (not meaning to sound rude) the fact that the North Republic (Iceland) brought Greenland.

I don't have a color on the Map. I'm the Netherlands-Althistoryman11.

You mean "I'm being frakking implausible and going on an implausogasm?"

Three minor issues. One: it looks like the Faroes are controlled by Denmark (The North Republic bought it from France) Two: (on my screen anyway) it looks like Sweden is the same colour as the North Republic. Three and less majorly: Antarctica is not shown as claimed by anybody. Would it not make sense to colour it in? Thank you David Rain (Sometimes...) (talk) 10:23, December 15, 2012 (UTC)

Scraw, I did the algorithm the best I could. Warman555

The war itself is implausible.

Add the CAR to the map-R Beal.

The area of New Brunswick and Nova Scotia are independent from the U.S. AND Canada.

Why are the Faroes shown as Danish? I have they have been part of the North Republic for quite some time. Besides which they where French before I brought them! David Rain (Sometimes...) (talk) 09:25, December 24, 2012 (UTC)

However, put Laos on the list. Read the way the game is Laos, Vietnam and Cambodia don't exist. They have been replaced by the Kingdom of Indochina, a Japanese satellite and the Japanese Prefecture of Tonkin. Nk
Denmark retires and give up to the North Rep. I have to go for my map game.Laptop_Zombie 03:53,
December 23, 2012 (UTC)
How the fuck did Malaysia conquer Indoasia logarithm was never made! Warman555

Proof from Wikipedia on the tribal thingy-

The rail link to Cameroon's coast is started and will be finished in 1981.

Global Events: A Mao Sangrenta finish their last act for a while; they stage a nuclear failure of the power plant in Kinshasa, Zaire. The result is devastating, given that it was in an urban capital city. With the Brazilian government onto them, they move into eastern Peru, particularly the Puno area but no one knows this. 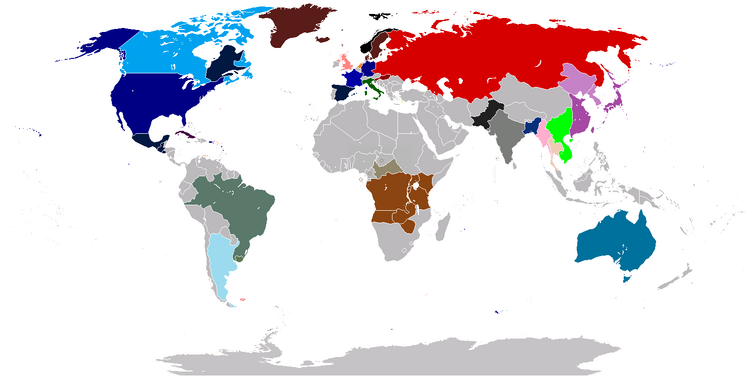 GLOBAL EVENTS (Pita)- Outrage shakes the world as the world learns of Korean nukes in Libya. Almost every nation condemns Korea for the acts. Meanwhile, Hungary continues to be condemned by the world as well. Zaire, which seemed to have been shaken up by the nuclear reactor accident, begins to come back as the people's confidence in their government is restored.

Global Events: The UN calls for an end to bloodshed in Africa and publicly condemns the feuding nations. Zaire, however, is still viewed as the aggressor. The anti-communist feelings that have been flowing throughout Eastern Europe rise to a fever pitch when Alexandra Ferraro (President of the United States) returns to make another Berlin Wall-esque speech in former East Germany. Liberal rebellions rise in every communist state, in an event popularly known as the Revolutions of 1983 (Revolutions of 1989 parallel!). US Secretary of State Ted Kennedy states that "Marxism-Leninism will be tossed in the ash heap of history soon enough."

ALERT: Voting for the 2013 Stirling Awards has begun! The current score is a tie between Principia Moderni and Axis vs Allies in the Lifetime Map Game award section AT THE BOTTOM. Go show your support for Axis vs Allies by voting! Thanks!

Italy: Italy invades Slovenia or whatever that nation on its eastern border is that's by Croatia, and Italian forces attack with full force.