Moderators are people who can: Cause political and natural unrest. EX: An unknown group of people set fire to the Reichstag, or, A giant Hurricane strikes Florida. Basically, the players should respond to the mod's posts. They will be underlined and not bulleted. You can also challenge implausibilities, take votes to revoke some posts, and in very rare cases, you can actually kick people out! An * means you're approved! Please sign with only three tildes, like this: PitaKang

Things Mods can do:

Note: Don't be implausible/biased or I'll kick you off!

From now on, please don't just concentrate on space exploration or sports competitions. It gets boring if that keeps on happening.

Economy: The car begins to be mass-produced.

Science/Technology: Minnie is sent to space.

Mod: Leave this blank for the Mods to fill out!!!

I would agree with you, but this time period was one where space exploration was of huge importance, and it is a central focus of the world. We could solve the sports stuff by having a separate page dedicated to the sports of Axis vs Allies, which would make this game unique, and focus on the politics on this page. By this time borders are basically set, and if you've noticed, haven't changed extremely in OTL from the 50s onward, therefore space and sports etc. fills this vacuum. Bats

I agree with Bats, and in which should be military-related things like "amp up its army" and "build battleships"?Collie Kaltenbrunner 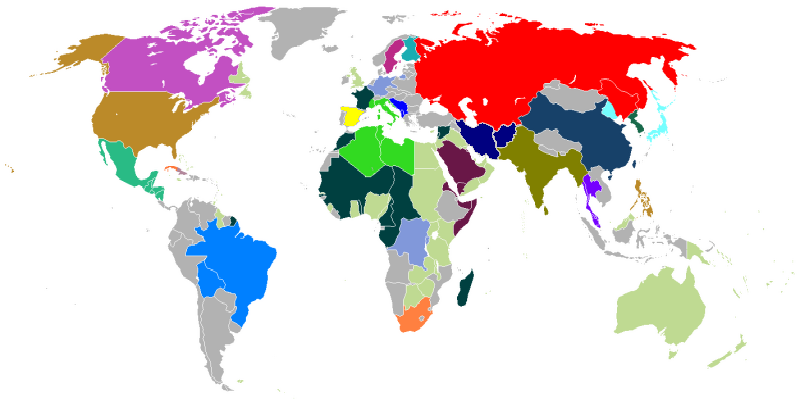 Wait a second, so I take TEN YEARS to finish my project and France takes six months!?

The mod vote has been moved to Talk:Axis vs Allies (Map Game).

They also offer to buy Baja California for 29 million dollars. I'm almost sure this wouldn't EVER happen.

I must agree as well. BC is probably the most influential province in Canada barring Ontario, as well as being the center of a lot of maritime industry and high-tech research in general. The Yukon has most of Canada's oil reserves. Seeing that Louis St. Laurent(who would most likely be PM right now) found many supporters among BC voters, it would be highly unlikely that he would sell the area. Not to mention that it would be an aborrent idea to most Canadian voters; seeing that the government would effectively be giving away 7 million people for weapons research.

Is this better then?

No. Any US expansion in Canada, after 1900 is totally implausible. Canada, nor Britain would want it. Plus Britain already has free oil from SA due to Yemen and Oman being the barter.

Osteroleiyo, Madagascar, and Indian Ocean Islands. Siam takes steps to reduce dependence on foreign powers. Siam uses its wealth to ensure that anything can be made, grown, or mined in Siam. Siam begins imposing Thai as its language both in Little Siams and possessions. In addition, it takes steps to phase out Southern Thai.

Politics: The Trienal Plan still is being put into practice.

Science/Tech: the Emperor Pedro IV thinks about the possibilities of starting a special program. The project is shelved because of the current lack of finances.

Entertainment: The first televisions are imported from USA to Brazil.

Politics: more battleships are constructed,Meanwhile, Zagreb is hurridly prepared for the Olympics.

Politics: India elects the Maharaja of Travancore as the new President.

Economy:India's Bombay Stock Exchange becomes massively profitable, and is a centre of trade for many nations situated in Asia.

Science/Tech: India continues to fund the SEA, where the first cosmonauts to enter space are planned within the year.

Entertainment: The Adventures of Shikari Shambu are created, depicting a hunter and his humorous misadventures.

Politics: South Africa is formally re-admitted to the Commonwealth, and the new government is operating much more efficiently.

Economy: The Color TV is invented and France GDP rises 3%

Britain invented the color TV a few years ago.

Science/Technology: Work begins on a Concord which will be finished in 1965 and will send a man into space in 1961

Entertainment: France World is opened in Paris which is like Disneyland.

Economy: SAR GPD rises 2% due to massive advertising of tourism of SAR.

Politics: The US begins pouring more money into building ICBMs, and the defense budget is raised considerably.

Science/Technology: The Atlas series of ICBMs are invented, with the Atlas I having a range of 7,000 miles.

Entertainment: The James Bond series hits the US like a storm, being the top-grosser for three weekends straight. A cartoon adaption for kids is planned for 1961.

Politics: India ceases to pay the royal families of the former Princely States, and states it is unnecessary. The defense budget is increased, while an ICBM is made in an Indian base in a confidential location

Economy: The GDP per capita of India rises to about 1000 USD, due to the success of the migration program. The rupee is now averaged at about three US dollars. Trade talks open with Iran (I'm just going to assume AHG's posts were totally not in canon.), and free trade is opened between the states.

Science/Technology: Following Italy's launch into space, with an Italian astronaut claiming victory, the SEA launched the Victory into orbit, with the longest moonwalk being undertaken.

Entertainment: James Bond hits India, and spawns a boom in the film industry, causing Indian companies to start seriously looking into the subject. Nehru's book, A History of India, hits bookshelves, and grosses an enormous amount of money.

Politics: Britain and the Commonwealth continue fostering ties with the rest of the Malta Pact.

Economy: Britain opens up a larger centre of trade in London dubbed the Global Trade Centre, where independent business organizations take up space.

Science/Tech: British scientists, using experiments derived from Marconi's tests come up with a primitive wireless phone, in which reception is not as limited to the handie-talkie of the War.

Blah, let's go back to the old posts. There's not enough detail in these.

Like I said before, how about a civil war in former French Indochina?

China, Cuba, and many other countries would have a civil war before SAR would. It is pretty stable.

France continues to send rockets into space and continues work on FranceWays.

SAR sends three people into space to SARLAB for six months to experiment life in space.

Indian scientists send a crew to explore the Indian Ocean. Dubbed aquanauts, they explore the depths of the sea. India continues on its infrastructure and highway system.

Britain continues working on infrastructure, and the Union of the Commonwealth movement gains more supporters, with several governments in Canada, Australia, New Zealand, Egypt, Iraq, and South Africa being some who are willing to become part of one country.

Uh, I'm fairly sure those countries are rather nationalistic, even if they are client states, and there's especially no way that Canada would agree to be a be "part of one country" when they were one of the original supporters for dominion autonomy, and a key contributor of the 1931 Statute of Westminster.

It's currently a minority that supports this, not a majority. It will be a slow process.

Japan: Japan decides to lower taxes in Korea and heavily invests in that area. Japan strengthens its military and economy. Japan starts a space program (etc, four years to get a man into space) and a nuclear program (etc, four years to get an atomic bomb (help from USA via Korea)). Japanese anime is extremely popular in western nations as a childrens show creating a lot of revenue for the studios and the government. Factories export manufactured goods all over the world in return for food and raw materials to keep the population going and the factories running. Japan accepts an alliance with Italy but politely declines the alliance with Finland. Japan asks USA, Britain and France for alliances with free trade agreements and technological advances on the table.

Venezuela: Venezuela enters the world game. We have no gripes, but wish to enhance our standing in the world.