The Aztec Empire (Nahuatl: Ce Mexïhca Anàhuãc, /se meːˈʃika ɑɳɑ'ɯɑ'k/), more commonly known as the Anahuac or as The Empire in the US, is a Federal constitutional elective monarchy in North America. It is bordered on the north by the United States, on the southeast by the Twantinsuyo, bounded on the south and west by the Pacific Ocean and on the east by the Gulf of Mexico and the Caribbean Sea. Covering almost two million sq km, the Anahuac is the third-largest country in the Americas by total area and the 15th largest independent nation in the world. With an estimated population of 194 million, it is the 12th most populous country. It is a federation comprising Fifty-two states and two Special Districts, Center (Tenochtitlan) and South (Chichen Itza); and by two overseas territories.

In pre-Columbian Mesoamerica, many cultures matured into advanced civilizations, including the Olmecs, the Toltecs, the Teotihuacan, the Mayas and the Aztecs. In 1521, Spain tried to conquer and colonize the territory, but it wasn't possible because of the Aztec resistance. The Empire formed an alliance with the Twantinsuyo to prevent European influence during the 16th century. The period during the following centuries period was characterized by economic growth, territorial conflicts, colonization and civil war, foreign intervention, and a failed putsch that attempted to overthrow the monarchy and establish a republic. The 20th century was characterized as a bloody century because of the Empire's participation in around seven wars, including the First and Second World Wars.

The first industrialized country in the Americas and a member of the NAEET, the OPEC, the G8 and the NATO, the Anahuac is firmly established as a high-income country and has the 2nd largest nominal GDP and GDP per capita (PPP). Since the 18th century, its economy is strongly linked to the United States economy.

The Aztec Empire is located at about 23° N and 102° W in the southern portion of North America, in a region known as Middle America. Almost all of the Empire lies in the North American Plate, with small parts of its Central American portion on the Pacific and Cocos Plates. Geophysically, some geographers include the territory east of the Isthmus of Tehuantepec (around 12% of the total) within Central America. Geopolitically, however, the empire is considered part of North America along with the United States.

The empire's total area is 2,072,550 sq km, making it the world's 12th largest country by total area, and includes approximately 6,000 sq km of islands in the Pacific Ocean, Gulf of Mexico, Caribbean Sea, and Gulf of California.

The Aztec Empire is one of the 18 megadiverse countries of the world. With over 200,000 different species, it is home of 10–12% of the world's biodiversity. The empire ranks first in biodiversity in reptiles with 707 known species, second in mammals with 438 species, fourth in amphibians with 290 species, and fourth in flora, with 26,000 different species. It is also considered the second country in the world in ecosystems and fourth in overall species. Approximately 2,500 species are protected by Aztec legislation. The Aztec government created the National System of Information about Biodiversity in order to study and promote the sustainable use of ecosystems.

The discovery of the Americas brought to the rest of the world many widely used ingredients. Some of Mexico's native ingredients include: chocolate, tomato, maize, vanilla, avocado, guava, chayote, epazote, camote, jícama, nopal, tejocote, huitlacoche, sapote, mamey sapote, many varieties of beans, and an even greater variety of chilis, such as the Habanero. Most of these names are in indigenous languages like Nahuatl.

The Empire is a federal constitutional elective monarchy. The federal head of state of Anahuac is the Huey Tlatoani, commonly referred to as the Emperor of the Anahuac. The Emperor is supported by the Cihuocoatl, the Prime Minister. The government type is unique in the world, and dates from 1325. It is a elective monarchy, as many in the world. The Tlatoani's election (that is a life-long period) is divided into three elections. The first one is made on each state and special district, where the population chooses the Calpulli's chiefs, the state leaders (which should not be confused with state governors). These 54 leaders then meet in a Great Council called Cakilixkistli (similar to the Vatican's Conclave) where they choose four Great Electors who will finally choose the Huey Tlatoani or Great Speaker. The Tlatoani needs to comply with various requirements, but basically experience and studies on politics, warfare and economics.

The government is divided into three powers:

Executive Composed of the Tlatoani and the Cihuocoatl, it is the head of state and government, as well as the commander-in-chief of the Armed Forces. The Executive also appoints the Cabinet and other officers.

Judiciary The Supreme Court of Justice, comprised by eleven judges appointed by the executive with Senate approval, interprets laws and judges cases of federal competency. Other institutions of the judiciary are the Electoral Tribunal, the Collegiate, unitary and district tribunals, and the Council of the Federal Judiciary.

There are four principal parties that control the Senate:

Because of the Empire's role in helping the United States to achieve its independence in the 18th centuries, the two nations have strong sociopolitical ties. They fought together in the First World War and the Second World War against enemies such as the Axis, including the Incan Empire.

The country is divided into 52 prefectures or states, two Special Districts in the continent, where the capital is located, and two territories outside the continent: one in the south part of Greenland and the other one in West Africa.

The Royal Aztec Air Force, the Aztec Army, the Aztec Navy and the Nuclear/Space Division are all collectively known as the Aztec Armed Forces. The current Commander-in-chief is Admiral Yăhuilli Ahuitzol, who is managed by the Minister of National Defense.

The total defense spending currently accounts for 1.05% of the total national GDP, which represents approximately 89.9 billion dollars (ranked second, after the USA).

The Armed Forces of the Aztec Empire are one of the most powerful ones in the world. They have a 600-year-old history and tradition since the rise to their enemies (Tlacopan) around the 15th century. It is composed of around 1.3 million men.

The Aztec Empire has a mixed capitalist economy that is fed by rich natural resources, a developed infrastructure and high productivity. Its national GDP is among the largest in the world, second only to the USA. The Empire is first place by GDP per capita, second largest importer of goods and the fourth largest exporter. The United States of America, Germany, China and the Republic of Great Colombia are their main commercial partners. The main exports of the Empire are electronic machinery and its main imports are automobiles.

The country has a lot of resources, including large oil deposits. It is the top produce rof silver and gold in the world. The main agricultural activities are the production of corn, avocado, chilis, wheat and many fruits (mainly bananas). Three quarters of the population work in the services industry.

The country is the fourth most visited in the world, with 49.2 million of tourists in 2007, behind only France, Spain and the United States of America.

The paved-roadway network in the Anahuac is the second most extensive in America as of 2005. Nonetheless, Anahuac's diverse orography - most of the territory being crossed by high-altitude ranges of mountains - has led to difficulties in creating an integrated transportation network. Even though the network has improved, it still cannot meet national needs adequately as 67% of the population have never used it, preferring instead the aerial transport or even the High Speed Train.

Being the first American country to promote railway development, the railway network of about at 330,952 km is the most dense in the continent. Most of it is used for merchandise or industrial freight and was mostly operated by Mexihca Treinej MT (Aztec National Trains), privatized in 1987.

In 1999, the Empire had 16,806 airports, of which 933 had paved runways; of these, 55 carried 97% of the passenger traffic. The Nezahualcoyotl International Airport in Tenochtitlan remains the second largest in both America and the world, transporting 95 million passengers a year. There are over 30 domestic airline companies, of which only three are known internationally: Aeromexihca, Mexihcanej and Mexihcaj Airlines.

Mass transit in the Empire is very important. A part of the domestic passenger transport, needs are served by an extensive bus network with several dozen companies operating by regions and about 10 lines of High Speed Trains operated by MT, Mexihca Treinej (National Aztec Railways). There also exists many interurban train passenger transportation between cities. Inner-city rail mass transit is available in Tenochtitlan, Chichen Itza, New Otumba, New Azcapotzalco, Cacaxtla, Zipolite, Purepechcalli, Mixco, Tulum and Hutatemallan with the operation of the subway and in many cases high elevated train due the orography and climate. This makes the Aztec Empire the country with the most subway systems by city. There are also suburban train systems in many cities such Tenochtitlan, Chichen Iza, and Cacaxtla.

The twenty most important metropolitan areas in the Anahuac:

The national sport is the Tlachtli, which is considered the ancestor of basketball. It is a very old sport, first attested about 5,000 years ago. It is attributed to the Olmec culture, sometimes called the "mother culture". Originally a sacred and ritualistic sport dedicated to the Gods, whose winners were sacrificed to them, it is exclusively recreational, having been declared as such in the 18th century, during the Easternization promoted by the Emperor.

Other popular sports are soccer, baseball and basketball, which are also popular in the United States. 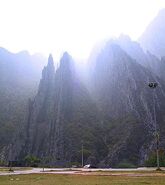 Mother mountain range at the north near Xicaua

Creel town in the state of Xicaua

Lacandole rain forest in the south in the state of Tlahuashco

Mountain range at the Pacific Coast in the state of Colliman

New Azcapotzalco aerial view, it is the fourth most populated city in the empire

Citlatepetl mountain, the highest point in the empire

Chinchayo dune desert on the north

The AMI-3 Quetzalcoatl, from the Royal Aztec Air Force
Add a photo to this gallery
Retrieved from "https://althistory.fandom.com/wiki/Aztec_Empire_(Aztec_Empire)?oldid=1648542"
Community content is available under CC-BY-SA unless otherwise noted.