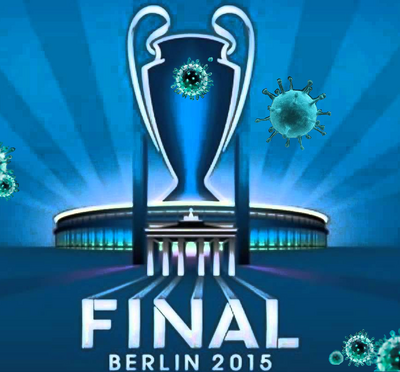 Berlin 2015 is the goal. 32 teams go through a grueling group stage and only the half of those advance to the knockout stages. Each and every one wants only one thing, to make it to the final in Berlin's Olympiastadion and be crowned European Champions. The only thing standing in the way of European glory is... microscopic viruses.

This will be a live timeline and will end on Saturday 6 June 2015. User:horton11 is the creator of the timeline.

Saturday 14 March 2015: Manchester City suffer yet another defeat in their Premier League race, losing 1-0 to Burnley at St. Mary's Stadium. Joe Hart, the Man City keeper takes pictures with the City faithful, but a 30-something year old yobbo sneezes on the losing goalkeeper. Hart wipes it off, but two days later he's come up with the flu and is set to miss the crucial away leg in the Champions League at Barcelona.