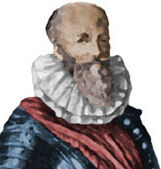 Bernal Diaz came to the Americas in 1514 as a common soldier. He traveled to the Yucitan twice before he joined Cortés' expedition into the Aztoltec Empire. He contracted papatlaca in the village of Zempoala and was cared for by locals. Diaz took note of the treatment the locals used in treating the disease. When papatlaca reached Hispaniola, he helped at least two families using these techniques. He also passed the information to many slaves, undoubtedly saving hundreds of lives and gaining for himself a reputation for fairness and compassion.

In 1521 Diego Columbus commissioned Diaz to go to Panama and force Pizzaro to submit to his authority. Diaz recruited local tribes and quickly defeated Pizzaro. He instituted the policy of training local warriors in contemporary fighting techniques and saw that they were adequately supplied. He also formed the elite "Serpent Cloak"; local warriors who served as personal bodyguards to Columbus.

In 1523 Columbus appointed Diaz to be governor of Veracruz. Upon Columbus' death in 1525, Diaz became the de facto ruler of the European New World until Don Luis was coronated in 1537.

In 1530, Bernal Diaz traveled to Tenochtitlan at the Aztoltec Emperor's invitation. He was appalled by what he witnessed there and secretly swore to oppose Motekwsoma. Upon returning to the coast he helped organize the Quauhtochco tribe and assisted in their campaign against other Aztoltec tribes.

Diaz is attributed to be the founder the shipyards a Veracruz and churches at Veracruz, Navaja de Cristo, and Sangre Sagrada.

Retrieved from "https://althistory.fandom.com/wiki/Bernal_Diaz_(Papatlaca)?oldid=10130"
Community content is available under CC-BY-SA unless otherwise noted.