The Electorate of Brandenburg, Brandenburg, is a medium sized constitutional monarchy in the North East of the Holy Roman Empire. It is bordered to the North by Lüneburg, Denmark and Güstrow. To the East lies Poland-Lithuania. To the west, Brunswick. To the South is Austria-Bohemia, Sorbia, Electoral Saxony and Magdeburg.

The capital is Berlin and the population is around 3.9 million.

The Head of State is Prince-Elector Ernst III

The currency is the Brandenburg Taler (BDT).

Originally settled by West Slavic tribes the area now known as Brandenburg was conquered during the 10th century as successive Kings of Germany expanded their realm towards the Oder. Creating the 'Northern March' various Margraves and Bishoprics were established to hold the area for Germany and the Empire. The Wendish settlement of Brenna became the German Brandenburg. A general Wendish uprising swept the Germans out in 983 however. A crusade against the pagan Wends in the 1130s led to Albert the Bear leading a process of Christianisation and Germanification, formally adopting the title of Margrave of Brandenburg in 1157. Under Albert and his dynasty the Ascanians Brandenburg expanded Eastwards across the Oder and invited settlers from the Western Empire, chiefly Altmark and Flanders, to help settle the region, freely intermarrying with the Wendish population.

Attempting to secure a Baltic coastline in the 13th century brought them into conflict with Pomerania and then Denmark who secured control of the duchy, much to Brandenburg's anger. The Ascanian dynasty became extinct in 1320 and Brandenburg passed to the Wittelsbachs. However their rule was marred by a Papal interdict and false pretenders. Margrave Louis I would relinquish the Margrave for Bavaria in 1351. Louis II managed to turn the Margrave into an electorate through close association with Emperor Olaf. His successor Otto II neglected the region and, disaffected with Olaf's wars, would eventually sell it to Olaf's chief rivals, the Luxembourgs, in 1373.

The Luxembourgs already ruled Bohemia but their rule there was based on a tenuous hereditary claim (as it would be in Hungary as well). The Bohemian and Hungarian crowns were virtually elected and rested on careful diplomacy. However in Brandenburg their rule was absolute. The two directly controlled electorates of Brandenburg and Bohemia also ensured they could enjoy a run of successive Emperors. During the Hussite wars however, authority waned and the local nobility enjoyed great freedom. It patchily converted to Lutheranism during the reformation, storing up future problems and after the loss of Bohemia and Hungary the Luxembourg's lavished more attention on their Electorate, not always to the nobles' great appreciation.

Although Brandenburger mercenaries flocked in their thousands to opposing sides of the Schmalkaldic Wars Luxembourg remained aloof, happy to see the Austrian Hapsburgs falter but without appearing to hasten their demise. When however the Fifty Years War began the Luxembourg's were in no position, despite their vast wealth, to defend their territory. Passing through the Electorate to liberate Prague in 1620 Schmalkaldic troops soon overran the defences, although various well defended towns and castles remained out of their control. Handing the province to one of the Schmalkaldic Empire's chief players was felt out of the question and would probably have only stirred a major revolt. Instead the commanders sought out Anna of Nassau. Anna was the young widow of the last legitimate heir to the Nassau lands that Luxembourg had confiscated only 30 years previously. She herself could claim family connections to most of the the leading dynasties of Europe. Her Luxembourg connections could satisfy the loyalists still holding out in their castles, her Lutheranism ticked the Schmalkaldic box, while connections to Poland and the Teutonic Knights Order could help prevent the war widening eastwards. Under her rule they created a puppet state, intending to use it for resupply and reinforcement but to keep it out of the war as much as possible. If that was what they imagined would happen they were sorely disappointed.

Anna's chief ministers were soon creating a national army along the models slowly appearing across Northern Europe. When in 1622 Anna's cousin Albert II of Prussia died Brandenburg was mobilised to regain it, facing off against Poland and Gothenland for the crown. The 13 year war reduced Brandenburg's participation in the Fifty Years War to zero and embarrassed the Schmalkaldic commanders as well as tying up Gothenland's large army for the duration.

The eventual Treaty of Danzig left Brandenburg with nothing. Over the next 20 years Brandenburg would repeatedly attempt to revise the treaty, trying to seize Pomerelia but eventually it turned in on itself. While Svealand fought Bavarian troops in the West of the country Anna's successor George I began a drive to completely root out Catholicism. The purges led to civil war, one that was no less devastating than the damage being wrought on the rest of Germany.

The Brandenburg Civil War (1653-1659) was the Fifty Years War in miniature. While the majority of the nobles cleaved to confessional lines others picked their sides dependent on local disputes. Foreign armies attempting to pass through were either turned on by both sides or co-opted to reduce a fortress before they were resupplied and sent on their way. Eventually the better organised troops of the Protestant side gained the advantage only to fall apart when the radicalised Diet threw stubborn deputies out of the lower chamber. Anna and George's wars had cost Brandenburg a huge sum of money and the Diet had had enough of the taxes George now called for to cover the back pay of the army.

A radical Protestant group formed of merchants and lesser nobles, backed up with the unpaid army, eventually took control, and George I, the instigator of the purge, was executed for treason in 1659 after he called for foreign assistance. The Diet, now calling itself the Commonwealth, survived for five years defying Imperial and Kalmar armies alike. Although it had to maintain the high taxes it had decried to pay for its defense the Commonwealth brought in various democratic reforms. First they extended the vote to all 'educated' males over 21 then by 1662 allowed women of the same age to vote. The 1663 session of the Commonwealth was widely represented in the rest of Germany as a debauched hedonistic orgy of male and female deputies but in reality the proceedings were generally piously sober and ruthlessly calculating in levelling society. The old church structure, essentially the old Catholic system overlaid with Lutheran practices, was ripped apart and new chapels and secular colleges were setup.

In 1664 however it was gripped by internal dissent over the far-reaching reforms and threatened by another civil war. Into the confusion stepped a Dano-Ladish army on its way to Prague which finally defeated the Brandenburger army and, entering Potsdam in the Autumn it broke up the Commonwealth. In its wake a reactionary monarchy was reinstated under a cadet branch of the Danish backed Isenbergs. This too fell after the Luxembourgs re-entered Prague and reignited old passions. A member of the Svealandic royal family was briefly considered for the Electorate however finally a more tolerate and well-liked monarchy was established under the Svealand's German army commander Georg August of Mansfeld in 1673. The County of Mansfeld was briefly part of a united Brandenburg-Mansfeld in the 1730s before being divided again.

Under the new dynasty Brandenburg was largely rebuilt, again welcoming many settlers from the West to help replenish the losses of half a century of war. The city of Berlin on the Spee rose to prominence after it was rebuilt in a grand fashion, the Diet eventually moving there in 1897. The Mansfelds proved to be the very model of Early Modern Enlightened rule, handing power to the Diet, doting on the military, building grand cathedrals for the populace and palaces for themselves. Brandenburg prospered under their rule.

It and its allies fought a series of skirmishes with Electoral Saxony and Madgeburg over tax collection in the maze of enclaves and exclaves on the Western border, collectively known as the Brandenburg Wars (1801-1815). The Imperial Diet eventually intervened to stop the fighting, rationalising the borders, mostly benefiting Saxony and Magdeburg. Brandenburg's military was left enlarged however and the borders became a sensitive issue. When Austrian troops conducted military exercises, supposedly crossing their border several times in 1894, Brandenburg challenged them. The fuming Austrian generals urged war, which they got, not expecting the Kalmar Union to guarantee Brandenburg. The ensuing 2nd Imperial-Kalmar War (1895-1896) saw Brandenburg troops alongside those from Denmark and Svealand decisively defeat Austria and march on Prague. The Imperial Diet sued for peace before Prague was reached however.

The poor quality of Brandenburg's farmland meant that it embraced the Industrial Revolution whole heartedly.

Relations with Denmark have cooled in recent years as Pomerania's troubles continue to disrupt trade with the Baltic, even so, the alliance between Brandenburg and the Kalmar Union still stands. 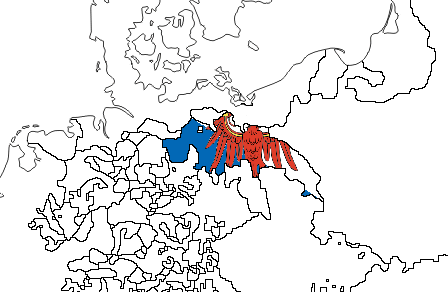 The Brandenburg branch of the Mansfeld line now rests on the sole head of Prince-Elector Ernst III. Privately he is recognised as insane and most executive power has been removed from him. Although technically the crown of Brandenburg will pass to one of his distant cousins, probably Countess Maria or her son Peter, many groups are now urging for Brandenburg to become a republic. Such a move in an Electorate has not been attempted since, well, the last time Brandenburg abolished its monarchy.

The Electorate is governed by a bicameral Diet who are elected every five years. The Chancellor is Maximilian Thiele.

Retrieved from "https://althistory.fandom.com/wiki/Brandenburg_(The_Kalmar_Union)?oldid=1647781"
Community content is available under CC-BY-SA unless otherwise noted.