On the evening of September 25, 1983, those viewers tuned into the Cable News Network (CNN), headquartered in Atlanta, Georgia, was one of the first stations to report the incoming nuclear missiles and the start of Doomsday. The following is a transcript of the video from roughly 8:50 PM until EMP blasts disabled CNN broadcasting, both from Atlanta and local affiliates.

"We interrupt this program for a CNN Special Report. We have just been informed that the White House has a matter of national importance that is to be addressed to the nation. At this time CNN does not know what this matter may be. [Pauses and listens to earpiece] We now cut live to the White House Briefing Room."

[Cut to the White House Briefing Room. The room is largely vacant, due to it being Sunday evening. After a moment, Press Secretary Larry Speakes enters the room and quickly walks to the podium. He is obviously shaken and nervous, but starts to read his statement.]

“At approximately 8:45 PM Eastern Daylight Time this evening, NORAD detected the launch of nuclear missiles by the Soviet Union. [Gasps can be heard in the background at this point. Speakes looks up briefly and then returns to his notes] Satellites have confirmed that many of these missiles are currently inbound towards targets in both the U.S. and Europe. President Reagan, who was in New York City, has been informed and at this time is currently en-route along with the first lady to Air Force One. Vice President Bush and other key leaders are currently being evacuated to safety as well. By order of the President, the military is now at DEFCON 1 and all steps are being taken to protect the nation. A state of emergency is in effect and martial law has been declared. The civil defense system has also been activated and measures are being implemented as I speak to begin the evacuation of major urban areas including Washington, DC. All Americans are asked to remain calm and take all necessary steps to ensure their safety. If you are located in a targeted area, we urge you to immediately leave. [Speakes pauses again and then looks up from his notes directly to those gathered] May God bless the United States and her people and keep them safe.”

[As he finished, Speakes turns to walk out, sweat visible on his brow. He suddenly clutches his chest and falls to the ground, suffering from a heart attack. Reporters leap forward to try to help him, while chaos and panic can be heard in the room.]

[Split screen with the White House Briefing Room and Dave Walker in Atlanta, who is pale faced and visibly shaken by the news. Crying and noises from the background can be heard. After a moment, he takes a deep breath and turns back to the camera.]

"From what we understand, is that the United States of America, and her allies, and the nations of the Soviet Union and other Communist states are now exchanging their full nuclear arsenals. World War Three has begun." [He listens to his earpiece again, and tears can be seen streaming down his face.] "Now, many of you out there may have seen our first broadcast, just a little over three years ago now. CNN President Ted Turner said then that we would cover the news until the end of time, and that we would then cover it live. Well, I'm sorry to say, but his prediction has now been proven true. [Walker pauses for a few moments, takes a deep breath, and wipes the tears from his eyes. Indistinct talking and shouting can be heard in the background, as well as the familiar tones of the EBS system from a radio of some kind.]To the people of the United States and the world, everyone here at CNN would like to thank you in making us your prime news source. Our efforts to cover the events of our lives as they happen has been the highest primary importance to us, and we are forever indebted to you.

[Walker listens to his ear piece again]. "I now have word that, true to Mr. Turner's remarks when he started the station, CNN will indeed play 'Nearer, My God, To Thee,' which was played by a band as the greatest maritime disaster unfolded over 70 years ago, and which will be CNN's swansong as well. [Pauses, the sounds of panic in the background gets louder. The camera is visibly jolted, and the camera is now slightly off centre of Walker] This is an executive decision to allow the workers here a chance to try to save themselves, by cutting programming and allowing them to leave their posts. The Emergency Broadcast System will cut in sometime soon as well when the local affiliates take over, though we don't know when, depending on your locale. We ask that you please turn to the predesignated networks, which include CBS, NBC and ABC, as the EBS will warn you sooner. You can also turn to a local radio station on your radio to also receive the EBS warnings. [A crash can be heard from behind, with a light that had shone on Walker suddenly dying, with a flash of sparks, followed by screams.] From Atlanta, this is Dave Walker, CNN News. Good night, and good luck, and may you survive the dark days ahead."

Nearer, My God, To Thee 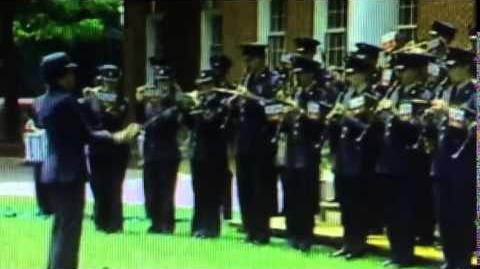 [The chaos in the CNN Studio is suddenly cut to a prerecorded version of the hymn "Nearer, My God, To Thee," with the CNN logo. The song would be played on most stations until the EBS Warning kicks in, which varied from almost immediately after the end of service, or up to five minutes later, the song having been put onto permanent loop. Those affiliates that did not turn over continued to play "Nearer, My God, To Thee" until electromagnetic pulses disabled all circuitry].

No one is reported to have survived from the CNN Studio in Atlanta, due to its location in Midtown at the time. Some affiliate stations managed to survive, being located in towns that were not hit. However, they were discontinued after the EMP blasts fried most electronics around the world. Some people have reported that, tuning into CNN stations to this day in the Southern Hemisphere, the haunting airs of the hymn are still played, though no documented cases have been reported. The "CNN TV Song" has become a rather persistent urban legend in the aftermath of Doomsday, and the story is enough that many pieces of media set on Doomsday would reference the playing of Nearer My God To Thee on CNN, even though CNN wasn't a major player in the media market in 1983. It might be ironic that in the end of the world, CNN became even more well known than it was when the bombs fell.