View source
The author(s) of this timeline are openly seeking contributions to this work.
Feel free to add to edit to your heart's content. Thank you.
This is a "live" timeline - its story continues to unfold NOW, in real time. See the Central News section for the latest news updates. ''This is also a collaborative timeline, being produced by a team of contributors. If you want to join us in developing the Central World, we welcome your additions.''This is a free timeline. You can make any page you want, if you place the proposal template ( CWProp , obviously without the spaces ) at the top and then make a mention of it in the talk page.

For the Portal Page see here. 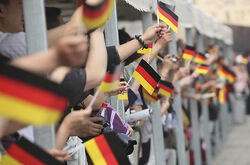 The Central World Timeline tells the story of humanity and the earth after the Central powers are victorious in the First World War, commonly known as WW1 or the Great War.

Then in the 30's, while Europe is oppressed by dictators, the Second World War broke out after the Union of Soviet Socialist Republics invaded parts of Eastern Europe to reclaim their lost lands, but they are crushed together with the allies, by the evolved Central Powers transformed into the Axis Powers.

Later the Cold War begins, between Japan and its puppets corralled in the Greater East Asia Co-Prosperity Sphere and Germany (and its puppets corralled in the European Community (and the Warsaw Pact). This causes the United States to use massively the Monroe Doctrine, so Latin America is filled with pro-American dictators, that eventually benefits it and gives it an appearance very different from now.

Then the EC and the Warsaw Pact collapsed, and the Russia Federation and the United States begin to take the place of their two predecessors. In addition to a cultural movement called the Modern Renaissance as the oppression ends as Europe collapses and Hirohito dies.

Today's world shows a world in which Japan is falling, Germany tries to regain the Superpower place much like Russia in OTL, and Russia and USA start competing, while Japan and Russia are about to start a Proxy War in Central Asia, Mongolia, and Russia's East, Europe begins to divide while Germany tries to keep his few puppets, Russia begins to have influence in Eastern Europe (the eastern bloc OTL), North Africa and the Horn of Africa is covered in monarchies and the United States regains its influence in Western Europe. Each Time a Russo-American Cold War seems more an more plausible...

Pages in which you can understand the Timeline

The following pages are reserved for future creation. Only three claims per user may be made at a time.