The name Charlesiane comes from early french explorer Philippe Lasalle, who named the first french territories after Charlemagne, whose importance in French culture had increased dramatically following the exploits of Joan of Arc and the establishment of the Order of Charlemagne.

At the outbreak of the Commonwealth Revolution in 1777, the Charlesianan government began conscription as an effort to ensure the war didn't enter its territory. Blah blah blah Tecumseh tries to war with the Vinlandians but when they get the better of him he signs a treaty with Charlesiane backed by France to establish an autonomous Skraeling homeland within Charlesianan territory.

French Revolution fails in France, Duke of Charlesiane introduces the Parliament act, enacting reforms similar to those adopted by the Commonwealth, as well as further land grants to French settlers. This attracts thousands of disillusioned French republicans over the next several years.

Statute of Emancipation and Civil War

Charlesiane is divided into 19 Marches, each headed by a hereditary Marquis, but in practice governed by a legislative assembly headed by a Premier. The one exception is Cherokis which is governed by a council of Chieftains. 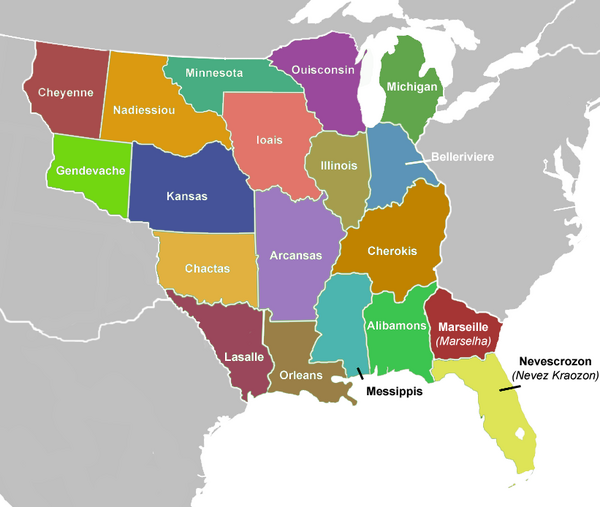 Nouvelle Bretagne is a semi-autonomous Duchy within Charlesiane made up of the marches of Marseille and Nevescrozon. The marches, which have a majority Breton population, successfully campaigned for more autonomy and were organized as a Duchy in 1989. The Duchy is headed by a Duke, and has its own parliament separate from that of French Charlesiane, but still must answer to the Grand Duke, and abide by any royal decrees.

Retrieved from "https://althistory.fandom.com/wiki/Charlesiane_(Sundered_Veil)?oldid=809626"
Community content is available under CC-BY-SA unless otherwise noted.