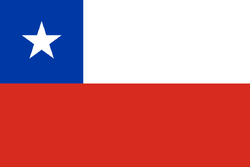 Chile, officially the Republic of Chile (Spanish: República de Chile), is a country in South America occupying a long, narrow coastal strip between the Andes mountains to the east and the Pacific Ocean to the west. It borders Peru to the north, Bolivia to the northeast, Argentina to the east, and the Drake Passage in the far south. It is one of two countries in South America (with Ecuador) which do not border Brazil. The Pacific coastline of Chile is 6435 km. Chilean territory includes the Pacific islands of Juan Fernández, Salas y Gómez, Desventuradas and Easter Island. Chile also claims about 1,250,000 sq km (480,000 sq mi) of Antarctica, although all claims are suspended under the Antarctic Treaty.

Chile's unusual, ribbon-like shape - 4300 km (2700 mi) long and on average 175 km (109 mi) wide—has given it a varied climate, ranging from the world's driest desert—the Atacama—in the north, through a Mediterranean climate in the centre, to a rainy temperate climate in the south. The northern desert contains great mineral wealth, principally copper. The relatively small central area dominates in terms of population and agricultural resources, and is the cultural and political center from which Chile expanded in the late 19th century, when it incorporated its northern and southern regions. Southern Chile is rich in forests and grazing lands and features a string of volcanoes and lakes. The southern coast is a labyrinth of fjords, inlets, canals, twisting peninsulas, and islands.

Prior to arrival of the Spanish in the 16th century, northern Chile was under Inca rule while the indigenous Mapuche inhabited central and southern Chile. Although Chile declared independence in 1810, decisive victory over the Spanish was not achieved until 1818. In the War of the Pacific (1879–83), Chile defeated Peru and Bolivia and won its present northern regions. It was not until the 1880s that the Mapuche were completely subjugated. Although relatively free of the coups and arbitrary governments that blighted South America, Chile endured a 17-year military dictatorship (1973–1990) that left more than 3,000 people dead and missing.

Currently, Chile is one of South America's most stable and prosperous nations. It leads Latin American nations in human development, gross domestic product per capita, competitiveness, quality of life, political stability, globalization, economic freedom, low perception of corruption and comparatively low poverty rates. It also ranks high regionally in freedom of the press and democratic development. However, it has a high income inequality, as measured by the Gini index. Chile is a founding member of the United Nations and the Union of South American Nations.

Alternate versions of Chile have been discovered in the multiverse:

Alternate versions of Chile have also been discovered to belong to other nations:

This is a disambiguation page, a list of pages that otherwise might share the same title. If an article link referred you to this title, you might want to go back and fix it to point directly to the intended page.

Very probably it refers to an entity that appears on several timelines.

If you have such an entity in your TL, add it to the list.

Retrieved from "https://althistory.fandom.com/wiki/Chile?oldid=931414"
Community content is available under CC-BY-SA unless otherwise noted.