Predictions of the climactic results of a nuclear exchange from the late 1970s and early 1980s prove fairly accurate.

The predictions of a Nuclear Winter came up short. Only a 10°F drop was noted, and as the attack occurred going into the late fall/early winter (Northern Hemisphere), it had no major effect on typical weather patterns. The dust cover blocked out the sun for several days, but within a week, it had dissipated and cloud patterns began to return to normal by mid-October. By contrast, later in the Summer of 1984, predictions of a "Nuclear Summer" did come true, as nitrogen oxides and a reduced ozone layer raised temperatures to an average high 10-25°F over normal.

The nuclear summer, along with the following severe droughts between 1984-89 in Northern Africa, caused many tens of thousands of deaths across this continent.

The nuclear summer has also produced some alarming changes in the Arctic North and Antarctic South, with dramatic increases in the melting of permafrost and the coverage of the Arctic Ocean with ice. Canadian ships probing the region have found that the Northwest Passage, long sought after and fabled has been proven to exist, although there is not any shipping demand at present for its use.

The effects of the nuclear summer appear to have stabilized at present, some 25-plus years later. The change to the weather patterns remain strong and appear permanent.

The effects of post Doomsday climate change have been noted by scientists to be very similar in appearance to the Holocene Wet Phase an extended period (from about 7500-7000 BC to about 3500-3000 BC) when rainfall across the tropics were substantially higher due to the increased width of the so-called 'monsoon belt' and many lakes and rivers have increased water levels and flows or even the Medieval Warm Period (950 and 1250 AD).

Effects of Doomsday on Earth's climate

Nuclear Winter, though feared, did not occur.

A major restructuring of the atmospheric cells occurred globally because of the effects of war, the Ferrell Cells almost collapsed, reducing their size by almost half. The Equatorial Hadley cells moved north (south in the southern hemisphere) and the polar cells also retreated pole-ward. The boundary between the new Hadley/Ferrell atmospheric cells moved north (Northern Hemisphere) and south (Southern Hemisphere) bringing the monsoonal (tropical rain) belts much farther north and south than pre-war. This change led to formerly dry areas that had been under the horse latitudes to become wetter.

There has been increased rainfall in the many regions result in the filling of endorheic basins, producing a new version of Lakes Lahontan, Bonneville and other lakes throughout the world, such as Lake Eyre basin in ANZC with the Cooper Creek and Georgina rivers flowing once year. The Salton Sea in southern California is reputed to be full, as are Tulare, Buena Vista and Kern Lakes in the central valley of California. Rumours abound that Death Valley is blooming almost every year with a lake half the size of Lake Manly.

The Caspian and Aral Seas are gradually restoring due to the increasing wet weather and also destruction of the irrigation systems in the area that were draining water away pre-DD.

There have been many changes in regions that would otherwise be deserts or semi-deserts, these are now becoming more habitable with between 25% and 40% more rainfall.

Examples of which are: 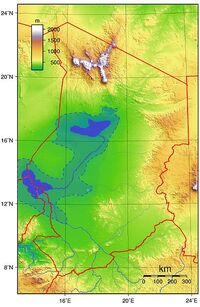 Increasing glaciation in the mountains of the Alps, Himalayas and Rockies and the interior of the continent of Antarctica, have offset the rise in temperature somewhat. However, the removal of the water from the water cycle has caused some minimal sea level fall (less than two cm).

Greenland and other Arctic countries such as Northern Siberia and Alaska have warmed slightly and the permafrost melts slightly more in summer causing some greening of formerly frozen lands. This has also opened the legendary 'Northwest Passage' during the summer months.

Sahel 2010
Add a photo to this gallery

Retrieved from "https://althistory.fandom.com/wiki/Climate_(1983:_Doomsday)?oldid=1570849"
Community content is available under CC-BY-SA unless otherwise noted.