Welcome to Communist World.The main POD is Karl Marx and Friedrich Engels-led Communist revolution in 1850s, but it only lasted for three years. But with the start of a Communist movement 70 years earlier then OTL the world will never be the same.

These are the POD in this ATL:

Both the House of Representatives and the Senate pass it in 1952 and Joseph McCarthy is elected on a platform that supported non-interventionism.

Note: All secondary POD are caused by butterfly effect from the main POD, but affect different scenarios of World History. 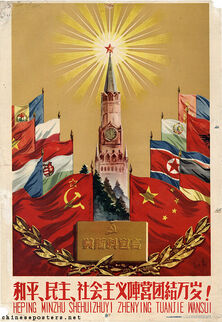 Retrieved from "https://althistory.fandom.com/wiki/Communist_World?oldid=960769"
Community content is available under CC-BY-SA unless otherwise noted.