In this alternate History Charles Martel the king of the Franks lost the battle of Tours. Because the main organized resistance against their invasion was destroyed the Muslim forces continued on to conquer much of Europe. 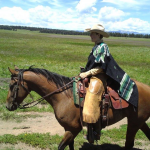