by The Guardian of Forever

"I wonder if the Emperor Honorius watching the Visigoths coming over the seventh hill could truly realize that the Roman Empire was about to fall. This is really just another page of history, isn't it? Will this be the end of our civilization? Turn the page." Jean-Luc Picard

A note from the author: I did this some years ago, and it's very unrealistic and frankly just all-around bad. If you want to see a good TL, click here. Maybe I'll come back some day and fix this.

The title is a Latin phrase, more or less, 'Driven on by lust for kingship,' used by Julius Caesar

in De Bello Gallico to describe the motivations of his Gallic enemies. However, the phrase better applies to Caesar, and in this timeline, Caesar's 'Cupiditate Regni Adductus' leads to dramatic consequences.

This timeline features two POD's, one minor, and one major. The minor one, though earlier, does not effect the second.

POD 1: 57 BC: After murdering his father, Phraates III, as in OTL, Orodes II

dies suddenly, leaving his brother, Mithridates the Great , as King of Parthia. (Rather than getting killed by Orodes.) Mithridates, more able than his brother, is able to take advantage of the second POD.

POD 2: 48 BC: With one important exception, events after the first POD go much as they did in OTL until 48 BC, when the second, more significant change occurs. After the death of Pompey, and Caesar's arrival in Egypt, he and Cleopatra VII

. In OTL, Ptolemy's general, Achillas , ordered the city taken by conventional means, which failed. In this timeline, he instead pretends to negotiate with Caesar, but sends an assassin instead, who successfully kills Caesar and Cleopatra. 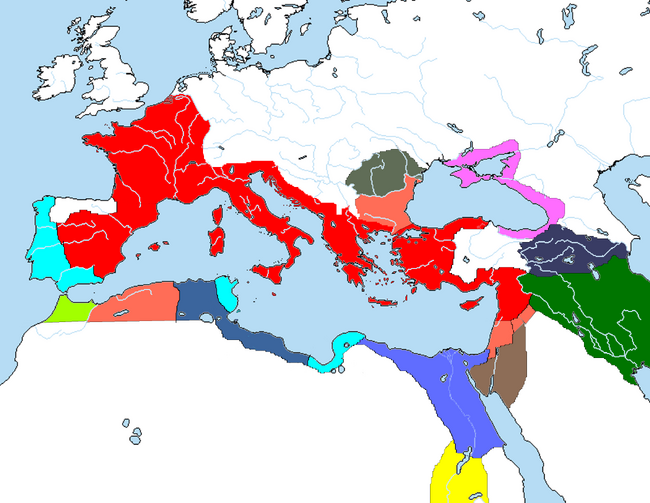 The Mediterranean in 48 BC, right before POD 2. Red-Area under control of Caesar. Salmon-Dependencies of Caesar (Eastern Mauritania

White-Tribes or other small states

, the best place to start

Anyone may edit, one one condition: Always leave an edit summary.

I alone reserve the right to edit without summarizing.

Valens has been replaced by an actual historical figure.

section has been edited to include events in

The Timeline section has been edited to include events in China. Also, the lives of Vercingetorix

have been changed significantly.

I will use names as authentic as possible, as long as most english-speaking readers can understand.

ex. 1 If the TL demands, I may use 'Aegyptus' for Egypt, but not 'Masr' (Modern Arabic name for Egypt)

ex. 2 I will use 'The Pillars of Hercules' for the strait of Gibraltar, but I will not use Jebel Tariq. (Also modern Arabic).

This TL 'grows.' In other words, a new bit of timeline is coming in my head every night. Until I reach a point where I'll limit or the present, all people/nation pages will 'grow' as well, but only after the completion of each timeline block. (Though there may be exceptions, especially in nation and war pages.)

Constructive criticism is always welcome. I made this as sort of a fun proof of comcept, and I have moved on to another project, so I'll probably be adding to this every fortnight or so. This might even become a limited timeline, perhaps only going to the end of OTL's ancient era, but...

Retrieved from "https://althistory.fandom.com/wiki/Cupiditate_Regni_Adductus?oldid=1382867"
Community content is available under CC-BY-SA unless otherwise noted.