Dai Viet-Lan Xang (Đại Việt-Vạn Tượng, 大越澜沧, ຈັກກະວັດຍິ່ງໃຫຍ່ຫວຽດລ້ານຊ້າງ) is a sovereign state located within Indochina. The current dynastic household ascended to power when Emperor Photisarath took the throne after the death of the final Emperor of the Lê dynasty, Lê Anh Tông. It borders the Heavenly Empire to the north, its vassal Chiang Hung to the west, Siam to the west and Cambodia to the southwest. 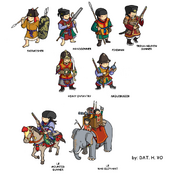 The government of Dai Viet is an absolute feudal monarchy. The Head of State of the country is the Emperor. The current dynastic household is the Khun Lo.

The relations between the Heavenly Kingdom and Dai Viet has mostly been strained throughout the country's history, as showned by numerous wars for independence by the country against the Northern Dynasty. During the Tran dynasty, the country repelled three Yuan invasions from the North.

After the Tian conquered the Yuan, Dai Viet sumbitted as a tributary to them much like it did to previous dynasties of China. During the Tran dynasty, the Tian supported the Lan Xang kingdom from Dai Viet aggression. After the Ho Quy Ly overthrew the Tran dynasty, at first, the Tian emperor had friendly relations with the Ho clan, but afterwards, an imposter who claimed that his name was Tran Thiem Binh and he was a descendant of the Tran clan kowtowed to the Emperor of China at the court in Luoyang. He claimed that the Ho dynasty was telling the Emperor lies for years as they have murdered the Tran family in a bloody coup, and demanded an army to help him claim the throne. At that time the Ho dynasty was fighting against the peasant revolt by the Lam Son rebels commanded by Le Loi, which they had succeded in ousting the Ho clan out of Thang Long and forcing them to flee to Thanh Hoa. Tran Thiem Binh is placed as Emperor by a Chinese army accompanying him. Upon knowing that Tran Thiem Binh was an imposter, Le Loi had a coup to removed him from power after sending Le Lai as an envoy to China to inform them. After establishing the Le dynasty, Dai Viet continued being a tributary of China.

In 1471, Emperor Le Thanh Tong requested China to open a trading market in Nanning between Vietnamese and Chinese merchants to increase trade between the two nations.

Dai Viet had mostly friendly relations with the Thai kingdom of Sukhothai in the past. After the Ayutthayan army defeats the Khmer kingdom, the former land of Champa was given by Ayutthaya to Dai Viet as a friendly gift to increase relations between the two. However, the relations between the two quickly became strained, as both wanting to expand their influence in the region. Dai Viet, after annexing Northern Lan Xang invaded Lan Na, which Ayutthaya seriously condemned the actioned and intervened to help the Lannese. The war ended mostly indecisive as they would went on another war. Dai Viet supported the rebellion of Chiang Hung which they indirectly started, in which the Dai Viet-Lan Xang coalition also invaded Ayutthaya's vassal of Cambodia. The war ended as a lost for the Vietnamese and relations between the two have been hostile after the war but has partly increased due to the treaty of Longvek.

Relations between Dai Viet and Lan Xang had been hostile before the Dai Viet invasion in 1434. During the Tran dynasty, Dai Viet invaded Lan Xang in which the Vietnamese lost after China intervened to help the Lao. After hearing the crimes of the Lan Xang regent Keo Phimpha in manipulating the Lan Xang throne, Dai Viet invaded and removed her from power, and placed the puppet king on the throne, which they gained indirect control over Lan Xang. Numerous Vietnamese officials are added to the Lan Xang court which they slowly adopts a more centralized style of government influenced by the Vietnamese system; and the two countries remained allies ever since. After the death of Emperor Lê Anh Tông, Lan Xang entered a personal union with Dai Viet due to Photisarath being the son-in-law of the late Emperor.

Dai Viet offers friendly relations with Majapahit after helping them against the civil war with the Demak sultanate. The Dai Viet-Majapahit coalition defeated the Demaks, and afterwards a marriage between the Dai Viet princess Thanh Toai and the Majapahit Crown Prince. Later, the coalition fought another war against Demak which they lost. Majapahit then was made to cede the island of Belitung to Dai Viet. Things started to heat up in the region of Maritime Southeast Asia as Majapahi declared war on Bali Kingdom to gain access to the spice trade. Dai Viet helped Majapahit with 15,000 men, hoping to gain advantage in the war by gaining access to the spice trade route or gaining the island of Bangka. This in return triggered Ayutthaya, who ordered 20,000 men to help Bali, fearing that the war will disrupt the trade in the region. This made Hindustan joined the war on Bali's behalf with 20,000 soldiers. Resulting into a major loss for the Majapahit. Later on in 1510's Majapahit decided to invade the Sultanate of Demak to reclaim their lost land in Java, as they requested the help from Dai viet, Dai viet helped majapahit with an army of 5,000 men with the commander Nguyen Van Lo, wich majapahit had won. Majapahit is also known for sending two tons of rice to dai viet and treated it armies in majapahit frontier well.

Dai Viet's Trần dynasty invaded and the Khmer Empire in 1366, won and made it a vassal state of Dai Viet in 1371. However, during the unstable rule of the Hồ dynasty, Khmer revolted and Dai Viet lost control of Khmer. Dai Viet would invade the Mekong Delta during a war with Ayutthaya to make use of the Make a sound in the east, then strike in the west stratagem but failed. After Ayutthaya granted Khmer its independence due to their domestic issues, Dai Viet would take advantage to gain control of the valuable Mekong delta.

At first, Dai Viet would assist Sdach Korn to rebel against the king Srei Sukonthor. The war goal was to make Ang Chan the 'king' to make sure the actions weren't viewed as treason against the dynasty. Eventually, Korn won and make Ang Chan the king while himself gaining the Chancellor title. This makes Dai Viet settlers be able to settle the Mekong region freely. After 20 years, Dai Viet assisted Korn in a coup to dethrone Ang Chan and gained full control on the delta.

Every town must have local schools. In the capital holds the Imperial Academy where noble students and high-ranked students study. Every three years there are three levels of test organized: Hội, Hương and Đình, where the valedictorians and the runners-up are allowed to take part in the higher-ranking test respectively next year. There are three subjects: Literature, Mathematics and History. The deadline to submit the Hương entries is on August. Upon applying for the exam, entrants must inform their and their ancestors' identity, residence and age. People who are related to criminals, traitors, corrupt officials, or who that have commited impiety to their parents, disloyalty, scamming, incest, etc. are forbidden from entry. Poetry exams shall be written with 300 words or more while History exams shall be written with 1,000 or more. High-ranked students serves important professions to the country.

The society of the counrty has the following classes: feudal royalty, mandarins, nobles, landlords, merchant, farmers, workers, craftsmen and the servants. The country is mainly an agricultural society; the majority of the Vietnamese population identifies as famers, however, since the mid-Tran dynasty and Le dynasty, the population of merchants and craftsmen has steadily increased, due to the opening of major ports like Van Don and Hoi An. The capital of Dong Kinh (also known as Thang Long) is itself a bustling trading market. Dai Viet controls several important trade routes in the region that connects the Malaccan Straight to China. The Merchant Guild was also established.

The state ideology of Dai Viet is Confucianism. The majority of Dai Viet's population practises Vietnamese folk religion, while there's a high population of Mahayana Buddhists and Theravada Buddhist. Although Dai Viet follows Confucianism as the state ideology, Buddhism and other religions are not suppressed. The commerce of the country is highly developed as well despite the Confucianism ideology, with trading ports opened for foreign merchants and allowing Vietnamese merchants to sail abroad to trade, with Dai Viet having a big trading network from India to Southeast Asia.

Retrieved from "https://althistory.fandom.com/wiki/Dai_Viet_(Merveilles_du_Monde_Map_Game)?oldid=1750678"
Community content is available under CC-BY-SA unless otherwise noted.