Wars between the C.S.A and U.S.A

War of Southern Freedom: In 1863, during the Battle of Gettysburg, Judah P. Benjamin convinced the armies of France, a country reborn in a revolution, to support the Confederacy. Near the end of the battle, French troops arrived and routed the Union, thus securing the northern advance of the Confederacy. Six weeks later, Ulysses S. Grant surrendered Washington, D.C after the defeat of the Army of the Potomac. The Union lost over seven states as the agreement of Confederacy freedom and the U.S capital was made Bangor, Maine. Abraham Lincoln was impeached in 1865, and a republican never became President again until 1912.

War of Annexation: In 1881, the South attempted to force the North into joining the Confederacy and invaded Vermont and Connecticut so as to weaken the Union. However, anti-South sentiment was strong and hordes of men joined the army so as to prevent more Confederate victories. After a series of battles, the Confederacy was driven out and the Union reclaimed the state of New York, but French intervention blockaded the major Northern ports and the North's advance halted completely.

World War I: In 1914, the Union allied itself with the Central Powers and in return for support for the invasion of the South, General George Armstrong Custer led the Grand Army of the Union in the conquest of France and Italy. Meanwhile, in Virginia, Theodore Roosevelt led the Rough Riders and personally defeated the Army of Northern Virginia in the Siege of Washington, D.C. In 1916, Britain, Russia and the Confederate states, the last members of the Entente, were forced into surrender by the Central Powers. Germany annexed France and half of England, Austria-Hungary annexed Italy, the Ottoman Empire was granted Japan and most of Asia, and the U.S regained all of its respective lands plus North Carolina and Alaska.

Fall of the Union: In 1941, the Union slowly began to unravel as its allies Austria-Hungary and the Ottoman's collapsed into smaller nations including the New Empire of Japan, who showed aggression towards the Union in Hawaii. Confederate leader George Patton began rearming the Southern armies and conquering Mexican lands, but it proved to be a ruse to distract the Northern military so it would allocate its forces to the Pacific. On December 7, 1941, an alliance between the Japanese and the C.S.A struck both the U.S fleet in Pearl Harbor and Washington, D.C. In March 1943, the Japanese finished sweeping through Asia and attacked the Union in the West Coast. What resistance they faced was disorganized and untrained. In 1944, the C.S.A advance through the North reached Maine and forced their addition to the South. In 1946, Japan was defeated in a surprise nuclear attack on the Home Islands, obliterating them and killing 30 million people. The C.S.A with no further opposition, became the world's most powerful nation. 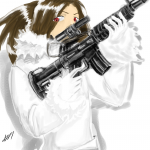