Europe was on the front line of the Cold War, with the Iron Curtain bisecting the continent between Communist East and capitalist West. Nowhere else in the world were more troops, targets and nuclear weapons concentrated. To the surprise of none, Europe was hit very hard in Doomsday, and most of the countries in Europe collapsed soon after. Regardless, a few countries survived, and many more new states countries formed after Doomsday. 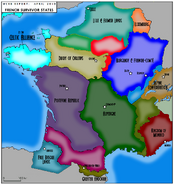 Central Caucasus
Add a photo to this gallery
Retrieved from "https://althistory.fandom.com/wiki/Europe_(1983:_Doomsday)?oldid=1523374"
Community content is available under CC-BY-SA unless otherwise noted.