The following is an Alternate History Wiki adaptation of this idea created by Mscoree (although he is not affiliated with this project).

From the fires of revolution and bloodshed, a new nation has been born. For years the British people have been devastated by barbarian invasion, civil war, and the breakdown of all civilization, pushing our nation to the brink of collapse. It was in this atmosphere that the people conspired for a change. Britannia has been a monarchy since times long before, their splendor and wisdom known throughout the isles, but these times are no longer. The monarchy has become a corrupt institution, which has only suppressed the British people, and pushed them to their near annihilation. In the year 543 the people finally rose up against the ill kings, creating the Republic of Britannia. Now the republic has come under fire from the disorder around it, and no one is sure if this fledgling union has the power to stand the test of time. 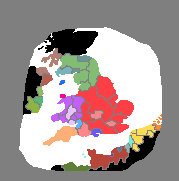 This game focuses on political intrigue, war, exploration, and other aspects of the Republic of Britannia, an alternate nation of somewhat unknown or mythological origins. Please be sure to read the rules and have a basic understanding of the game before joining.

The government of the Republic of Britannia shall initially work as follows. 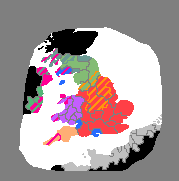 The history of the British Isles is largely unknown. The British people's own origins is also shrouded in mystery. Most historians believe that the British people founded their capital city of Londinium 570 years ago, and date subsequent years accordingly. In 543 a revolution successfully toppled the British monarchy, which is believed to have ruled since the nation's founding.

In the capital city of Londinian elections began for the office of Consul among the nation's elite.

A rebellion among the Peritians of Siydwic (southwest Picarian kingdom) breaks out toppling the nation's government. A nobleman named Ariovistic is elected as king.

An army under the command of Erhan Iunius, son of famous consul Lucan Iunius, arrests Asvalde Tarius, claimant to the now defunct throne of Britannia in Metaria.

Narkis Rigonanus, a former senator, begins a militant campaign in the north of Britannia to convert people to the Old Gods.

A British envoy makes contact with the Kingdom of Walinia (yellow).

In an effort to address the grievances of displaced peasants in southern Britannia, Gvein Lebines, Lower Tribune, bypasses the senate and passes a law limiting the amount of land belonging to the state that any individual could farm, causing the breakup of large plantations maintained by the rich on public land. This plan is instituted in part to increase the nation's military manpower, while also increasing the efficiency of farmland.

House of Iunius: Secnalius Iunius, former Vice Consul and influential senator declares his intention to seek the consulship. Erhan Iunius begins to transport the captured Asvalde Tarius to the capital of Londinian.

Gvein Lebines: The Lower Tribune begins seeking support for his ambition agrarian reform law. Funds are transferred to the project, however when the project is vetoed by Senator Milo Gavarius, Gvein turns his attention to having the senator impeached. Gvein publicly speaks out against the election of Secnalius Iunius, calling his father a jingoistic, unfit ruler who failed to aid the needy of Britannia. Gvein compares a consulship under Secnalius to be a return to tyranny. Instead Gvein makes a political alliance with Forbin Brynmorus, a more liberal yet well established politician, also running for the consulship.

House of Eliphale - Kars Eliphale announces his intentions to seek the office of consul, promising to fight against the agrarian reforms of Gvein Lebines and his supporters. Kars also begins championing a law officially extending all proconsular appointments to five year terms. Roland Eliphale, begins heavy recruitment in his province of Hymrigantes, and requests additional forces be transferred to his province to defend the border against the aggressive actions of the Peritian nobleman, Orecticlorn. He also points to the fall of Siydwic as evidence of the native problem. Upon receiving word of a possible Peritian ambush in Metaria, Maintus Eliphale and his captive, the royal pretender, travel to the northwest port of Monslvin.

Martis Lebines: Although he is popular among the supporters of his slain brother, Gvein, and among the zealous lower classes, fearing for his own life Martis Lebines flees the capital of Londinian and travels to Oxenaforda. Secretly however he still is an active supporter of the agrarian reforms.

Marcen Vanderilus - One of Britannia's most powerful generals, Marcen Vanderilus sets out to begin a political career, stepping down from his post and returning to the city of Londinian. He begins campaigning for the position of Minister of the Treasury.

Secnalius Iunius is elected Consul by the Senate, with Kars Eliphale as his Vice Consul. The conservative general and supporter of the House of Iunius, Fons Celsnius, is appointed Minister of War. The Senate reluctantly elects Marcen Vanderilus, hoping to quell the unrest caused by the death of Gvein Lebines. The more moderate Stolo Licinius is selected as Gvein's successor.

The faction led by Narkis Rigonanus secretly converts the Governor of Metaria, Lorente Gulbran, to the faith of the Old Gods. Lorente decrees that the pagans shall be tolerated in his province, angering the Senate in Londinian.

Marcen Vanderilus: Marcen Vanderilus begins his career as Minister of the Treasury immediately. He addresses the people of Londinian and praises them for their support, promising to alleviate problems for the lower classes. Marcen makes an alliance with member of the General Assembly, Sveinn Caecetilus, an outspoken liberal and supporter of the late Gvein Lebines, to have a law he has primarily authored be presented to the General Assembly. The proposed law would restrict the interference of the wealthy in elections, introduce voting by lot for choosing magistrates, passing laws and deciding legal cases, replacing the earlier system of oral voting. In order to prevent the wealthy from inspecting ballots a second law narrowing the passages down which voters pass to cast their votes, in order to prevent outsiders from harassing the electors. These reforms are vastly popular among the lower classes, however they alienate Marcen from any potential upper class senators who may have initially supported him, including the other members of the consul's government. The moderate Stolo Licinius is pressured to support these reforms or face retribution from the lower classes. Additionally Marcen calls for Martis Lebines to return to Londinian.

Secnalius Iunius: Secnalius begins his reign as consul in Londinian. Kars is appointed to the head of a commission to take action against he supporters of the late Gvein Lebines. Upon learning of he spread of the faith of the Old Gods across Metaria, and the possible support of the governor Lorente Gulbran for the zealot Narkis Rigonanus, Secnalius begins organizing forces for an attack on the zealots.

Erhan Iunius: General Erhan Iunius, Commander of the Army of the Mersey garrisons the city of Monslvin to ensure it does not fall into the hands of the rebellious zealots in the north. The imperial pretender is stationed within the city's custody until further notice. Maintus Eliphale is ordered to lead the fifth legion and the Metarian Auxiliaries under his command against the zealots, while the sixth legion remains in the city.

Fons Celsnius: The Minister of War calls for all people in Londinian to set their differences aside and to join together united as Iodenists against the rebellious pagans to the north. For the politicians, he calls them to stop political infighting and requests that they support the war by allocating funding for it. Celsinius also calls upon the citizens of Londinian to take up arms against the Pagans and fight for Iodenism. He also takes on an ambitious program to reform the military, making them a larger and more disciplined fighting force. The Minister of War leads his army to the North to join the rest of the British forces.

House of Eliphale: Roland Eliphale, Governor of Hymrigantes continues to amass forces in the north, using the recent conflict across the border as an accuse to extend his own power. He receives news that his efforts have successfully tricked the Minister of War to call for an increased military presence. The news that Fons Celsnius is personally leading forces into Metaria is deemed shocking, considering what Roland considers to be a very minor force. Maintus Eliphale detaches from the main contingent under the command of Erhan Iunius and engages against the religious zealots in battle east of Monslvin.

Narkis Rigonanus flees into hiding, but not before his forces ravage much of northern Metaria. Maintus Eliphale successfully defeats a rebel army east of Monslvin, however he fails to capture the rebel leader.

A southern army under the command of Fons Celsnius lays siege to the capital of Metaria, Temslvin.

Proconsular terms are extended to five year terms. Additionally the Senate approves a further military presence in the north following attacks near the border.