The Kingdom of Florida today covers the Floridian peninsula and a small amount of territory to the north. At one time, prior to the Second Global War, the Spanish terrritory of Florida included what is today the NAC province of Pensacola. Florida tends to be a buffer state between the NAC and the Empire of Mexico. 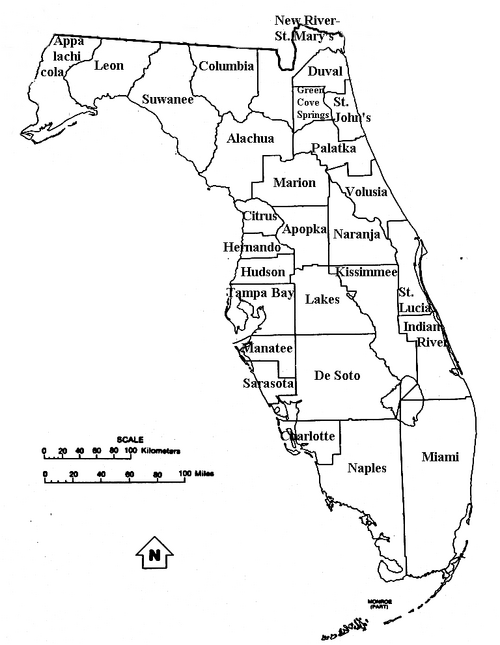 During the early 19th century, northern Florida saw considerable immigration from the NAC province of Williamsland, particularly after the Slavery War, when slaveowners (from all over the south, not just Williamsland) immigrated, with as many slaves as they could hold on to, to Florida, where slavery remained legal.

As in Texas, the Anglo settlers found problems with their new home.

In 1847, the Second Carlist War broke out in Spain. Florida took advantage of Spain's distraction, declaring independence from Spain. After a brief fight, Florida was an independent nation. Independence movements soon spread into the Caribbean, resulting in the establishment of several new nations. Mexico, seeking greater influence, supported the revolutionaries, many of whom became de facto protectorates of the Empire.

The new nation almost immediately fell apart in the First Floridian Civil War. The rebels had no unified vision of what they wanted their new nation to be. Many (but by no means all) of the Hispanic residents desired reunification with Spain. In addition, both Hispanic and Anglo residents were divided into several major factions

Most of the factions remained in one form or another in the post-war Florida. The Annexationists in particular have remained a steady political force to this day, waxing and waning over time. The Distant Monarchists gradually faded away, while the Free Republicans remained a strong force, though gradually evolving into a more general abolitionist movement, finding supporters among the monarchists as well. The Partionists evolved into a secessionist movement among Hispanic residents.

The First Republic of Florida proved unstable, and was riven with corruption. The two states became increasingly antagonistic. Abolitionism grew strong in Anglo Florida as immigrants from the NAC crossed the border. Even the former slave provinces of the NAC had grown to despise the old system. Hispanic Florida, on the other hand, having far less immigration, remained more strongly attached to slavery.

These slavery issues, as well as the increasing disparity between north and south, led to Second Civil War, after the government in St. Augustine promulgated the Second Constitution for the Republic of Florida in 1869. The Second Constitution abolished the former states, and in their place established 12 new provinces, 9 of which were located in former North Florida, and 3 in former South Florida. The new constitution also abolished slavery.

The leaders of the newly-abolished South Florida declared their independence. Slave owners in former North Florida also rebelled, declaring the new constitution illegal, and demanding the restoration of the First Constitution. This led to the Second Floridian Civil War (1869-1873). The NAC supported the government forces while Mexico supported the South Floridians and their slaver allies. This was just one of numerous by-proxy wars between Mexico and the NAC.

The government forces won, and the Second Republic of Florida began. The Second Republic was far more centralized, as well as being anti-slavery. In deference to the rebels, it was redivided into 16 provinces, 8 in the former North Florida and 8 in the former South Florida. However, the state governments enjoyed far less power, and as a result, the numerically superior Anglo population possessed greater authority.

This did not escape the attentions of the Presidente, and in 1878, he provoked a war with Cuba, ostensibly over shipping rights through Yucatán Channel. During the Cuba-Florida War (1878-1883), these emergency powers were invoked. The war ended poorly for Florida. Not only did they not gain the shipping rights they sought, but they had to cede the Keys to Cuba.

At the end of the war, the Presidente refused to return the emergency powers, leading to the Third Floridian Civil War. The Presidente was overthrown, and a Third Constitution was established, which attempted to curb the president's power.

The Third Republic was proclaimed on May 7, 1885, shortly before the outbreak of the Third Global War. The Third Republic was a decentralized federation of semi-autonomous provinces. It proved the most stable and adaptable of the Floridian governments to date. When the Third Global War broke out, Florida declared neutrality, though was forced to permit warships from both sides to travel through its territorial waters. The war placed a tremendous strain on the Floridian economy, and led to drastic inflation and high unemployment.

In the aftermath of the War, Mexico began its program of Caribbean Expansion. Southern Florida saw increased hispanic immigration in the aftermath of Mexico's wars of conquest. The economy slowly began to recover as trade improved. Tourism became a major source of foreign currency. Many dared to hope that Florida's troubles were gone.

In 1925, when the North American War broke out, Mexico took advantage of the NAC's distraction to invade Florida, ostensibly over discrimination by the Anglo majority over its Hispanic minority, but in actuality to establish a puppet government. By 1927, Mexican forces had captured St. Augustine, and the Third Republic was over. In its place, a monarchy was established, with José, brother of Emperor Salvador of Mexico, on its throne.

From 1927, Florida has been ruled by the Iturbide Dynasty, first by King José, and then by his son Carlos. The Crown Prince of Florida is Carlos, Prince of the Keys.

Under the monarchy, Florida has been generally aligned with Mexico. There were suggestions that it might merge with Mexico as a subordinate kingdom (much like Cuba), however, this has not happened, in large part due to threats by the NAC to invade if this were to happen. In 1952, Mexico returned the Florida Keys, which had been lost in the Cuba-Florida War. Prince of the Keys (Príncipe de los Cayos) was subsequently adopted for the Crown Prince.

In 1962, King Carlos moved the capital from St. Augustine, where it had been since the founding of the nation, to Miami.

The currency of Florida is the Floridian Peso/Peso Floridiano. Historically, the Peso was divided into 8 bits or reales. Inflation, however, eliminated the subdivisions long ago, and, after the establishment of the Third Republic, a revalued Peso was established divided into 100 cents/centavos. Inflation has long since eliminated those, too. There are currently approximately 275,000 Floridian pesos to the North American Dollar. Due to the recent rise in inflation, new coins and banknotes were introduced in the year 2003, and again in 2005. The new 100,000 and 250,000 peso coins have not yet seen wide circulation. Minting of coins below 1000 pesos has been stopped, though 250 and 500 peso coins still circulate.

Chairman of the Provisional Government

Presidents of the First Republic

Presidents of the Second Republic

Presidentes of the Third Republic