The name Fortunia was coined in Spain, probably as an interpretation of the Chinese word Fútxēu, or by the gold the Chinese exploited from the continent. This name is used in most European languages. 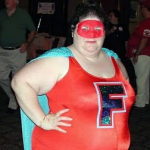