Welcome to the Revised and Reloaded Fractured America Map Game!

The last game died due to biased mods, yes, sadly that was me.

Sims, the whole of #2 is implausible. May I fix it?

Alliances will put their page/links to their pages here.

There will be five mods, but impeachments are allowed, not by other mods though, by players who are not mods. 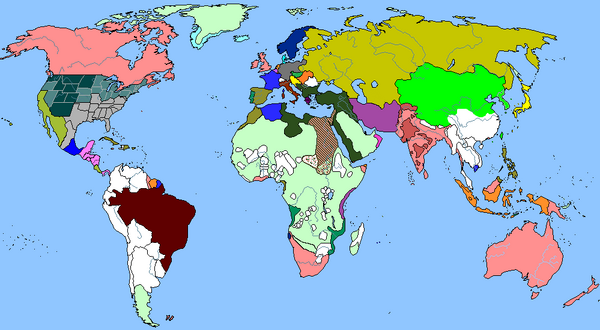 There will be four mapmakers

The game has begun, and may the odds be forever in your favor.

The Central American nations throw out there British protectorate status and re-assert themselves as independent nations. Nicaragua splits into two nations almost immediately due to Civil War. El Salvador and Guatemala, however. begin talks of unifying with the Yucatan to form the Confederation of Central America (CCA), The new nations take a strong anti-European stance and begin to look for Allies in South America, not wanting to trust the CSA, CE, or the USA.

Not happening. Those nations reached out to Britain because California was going to encroach on their land. Since that threat is seemingly over, I had a plan I was going to unveil this turn anyway so just let me do that.

No. They're fine how I put it.

Retrieved from "https://althistory.fandom.com/wiki/Fractured_America_Revised_and_Reloaded_(Map_Game)?oldid=1524906"
Community content is available under CC-BY-SA unless otherwise noted.