Much like its neighbour the Holy Roman Empire Francia is technically a sovereign state though it rarely, if ever, forges a common policy. A 'Parliament' of Francia sits in Tours and acts as a arbiter of disputes between the different states. It is also in charge of the railway network that is slowly spreading across the region - a rare instance of cross country co-operation.

There is a small degree of military co-operation between the purely French states but there is no signed treaty of alliance as in the Kalmar Union.

Most of the countries use the French Livre (FLV) unless otherwise stated, though only France, Auvergne and Burgundy are legally allowed to print currency.

The Unitary Flag of Francia was adopted after several states objected to the continued use of the Royal flag of France. It is flown on all governmental buildings within the territorial limits of Francia in conjunction with the ruling state's flag.

Technically the King of France, Charles XIII, is the Head of State for Francia, however not all of the states recognise his authority. For these reasons he uses the title 'Duke of Orleans' when dealing with the Parlement in Tours. 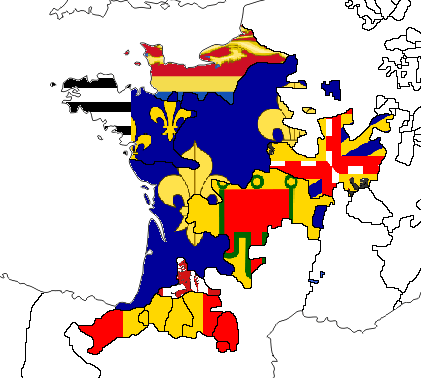 Retrieved from "https://althistory.fandom.com/wiki/Francia_(The_Kalmar_Union)?oldid=1579413"
Community content is available under CC-BY-SA unless otherwise noted.