So, recently there has been a lot of talk about community timelines, but we, being the lazy people we are, have yet to get one off the ground and while we all agree that we want a high quality map game, we seem to be struggling with that as well. With this in mind, I decided to make a sort of mixture between these two, Game and Timeline. With any luck, we will be able to have some fun with this and maybe generate some good content along the way.

Welcome the the first (and probably only) installment of a new game - A Game of Nations.

Note: If you have any questions regarding the rules, please message me on my talk or on chat.

*I have no earthly idea why you would do this. Bonus points to whoever does, though.

Next to the map you post with your nation on it, put some basic information about it in the following format:

Save the map file you make in the following format:

And if you are on mobile?

Surely you have a computer to use somewhere. Use that. If not, there are a bunch of image editing apps available for both iOS and Android if you search it up. Make an effort.

Yeah, halfway across the Country.

Like I just said, there are free image editing apps available for both iOS and Android.

Exactly what the name implies. These are the users who have volunteered to keep the game going, and will check for plausibility and formatting. You can message them with any questions or concerns about the game. In order to join, you must have permission from either Fires or LL, and both if possible.

Mods can only be demoted or removed by Fires

These are users who can help you with making maps, Wiki-text for your nation page or help give you ideas for your nation. If need be, they can also be asked questions, though it is recommended you ask the formal mods if one is available. Anyone who is interested can sign up, as long as they are willing to help. Formal Mods can kick people off this team if they see fit.

A list of players so everyone can keep track. Resets every turn:

This is to determine what order the nations are made for each turn.

Mods go first. Fires said he will not be around for a while so he won't be listed as first priority this round for the sake of saving time. FP is also not listed because he has not recorded his claim from Turn Two.

Don't have the time or a stable enough wi-fi connection to make my turn now. I moved myself back two spots. ~Oct 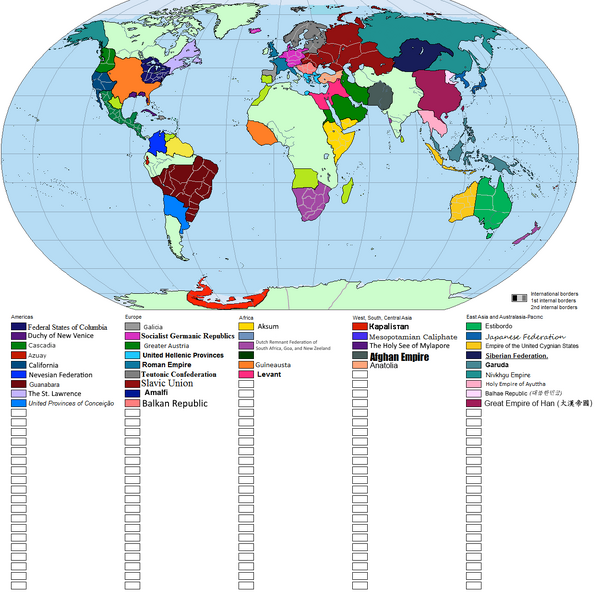 (Was given permission by Oct to go next.)

Note that Scraw let me have New Zealand as New Zeeland. 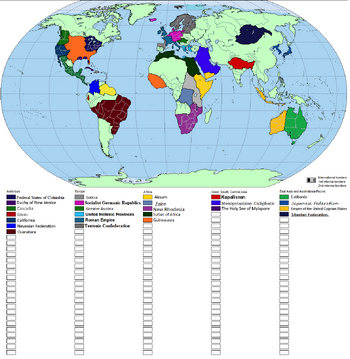 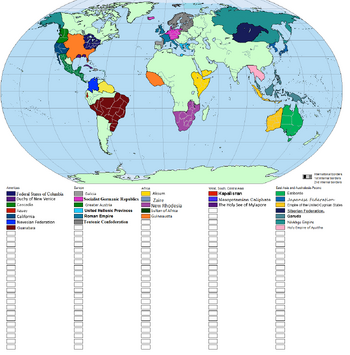 Kingdom of Spain and Portugal (AH28)

Map later (could someone do the map for me because I can't make maps ATM.)

Seriously should be Castile-Portugal considering that Spain comes from the Roman Province of Hispania which included Portugal. The whole reason the name Spain was used again was the Union of the Catholic monarchs, which obviously didn't happen in ATL. Also Spanish was originally called Castilian and is still known to this day as that.  ~Oct

But I'm yet to create a history for this nation and it'll make sense why it's called that. ~ AH28 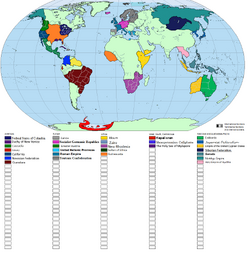 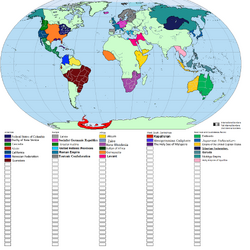 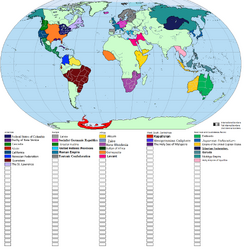 Please create a page for this as soon as possible. You will not be able to join the next turn if you do not. Thank you. ~Tim 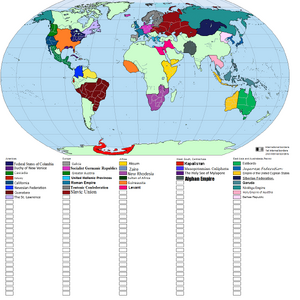 Land already claimed by another nations, you have 24 hours from now to make a new turn. Prince Octavian , of Jerusalem, Sicily and Swabia, and Duke of Amalfi.

What land was claimed? Lord Falconis

Churchill and the parts of Canada. ~Oct

I actually worked this out. The company is tributary to Canada. Epic, creator of Canada

I have overturned Oct's decision. The Hudson Bay Company may proceed. However, Lord Falconis, please fix this as soon as possible. There are many spelling mistakes and grammatical errors. — T I M (TSW • AH • MGW • Contribs) 01:56, July 6, 2016 (UTC)

Neither Canada nor Hudson Bay Company has a map or nation page.

I can't make a map as it says in Canada's entry. Epic

For information on Turn One, see this Archive

Retrieved from "https://althistory.fandom.com/wiki/Game_of_Nations?oldid=1424485"
Community content is available under CC-BY-SA unless otherwise noted.