Gangnam Style (강남스타일) is a title of the hit song by Korean singer Psy. The song became an internet sensation on July 2012, producing lots of videos of people dancing the "horse-ride" move to the song. Due to its popularity, there were many variations and parodies made.

The song was released on July 15, 2012 on YouTube. The song's title is derived from the Gangnam District in Seoul, South Korea. It would become a hit song for the weeks to come and finally a internet phenomenon as people around the world would dance to it, either uploading their version of the dance or by flash mobs in famous landmarks in major cities around the world. The phenonmemon, called the "Korean Wave," was mentioned by prominent figures, from celebrities to head-of-states.

A hoax was uploaded on Reddit claiming that Nostradamus predicted the end of the world through the song Gangnam Style. In the hoax, it mentioned the calm morning (Korea), the dancing horse (the moves of the dance similar to riding a horse), and "when all zeroes are nine" (referring to the 1 billion view prediction that was to occur on December 21st, 2012). Apparently, the hoax video was made to coincide with the fears of the Mayan doomsday prophesy.

Psy was scheduled to have a concert in Manila, Philippines on December 20, 2012. However, just two days before the anticipated concert, it was postponed to February 20, 2013 due to logistical issues. The Korean singer was also to perform in the Ball Drop in Times Square, NYC on December 31, which was would have his 34th birthday.

Psy was somewhere in South Korea when Russia and China launched its nukes on the United States and their allies in the Asia-Pacific Region. It is currently unknown if he survived or was killed on the nuclear attack or its immediate aftermath. Nonetheless, there is no confirmation of his current status as of 2016. By the time of World War III, it was expected that Gangnam Style would reach 1 billion views on YouTube - something that never happened due to the war.

The war caused the destruction of the internet, the stock market, international trade, and many other technological and cultural advancements the world has achieved in the past 50 years.

During the 2013 Pacific Expedition conducted by remnant U.S. Navy ships belong to the United States Pacific Remnant Zone, the expeditionary troops were shown pieces of surviving pre-war objects from the U.S. Pacific territories and other nations; particularly, one citizen from the Northern Mariana Islands was discovered to have a copy of the video on a smartphone. While this discovery brought about nostalgia to everyone living in the USPRZ and other surviving states, it is believed that surviving copies of the song/video exists in areas not affected by EMP and the nuclear war itself – despite the internet being nearly none-existent and the abandonment of YouTube's headquarters in San Bruno, California. Surviving copies are believed to be present in smartphones, CD players, television sets, and computers in areas where K-pop made its mark such as the Philippines, Thailand, Malaysia, Indonesia, parts of Oceania, parts of Latin and South America, and in Africa.

It was allegedly reported that the newly-formed Republic of Korea was using this song to boost morale among South Korean and U.S. troops during the Second Korean War. Upon reunification of the Korean Peninsula under the democratic South, this song is still widely popular in Korea due to its pre-war significance and nostalgia. The same sentiment is felt in surviving states of the world.

Recently, a video was sent by U.S. forces still stranded in Helmand Province, Afghanistan performing a dance to the hit song. 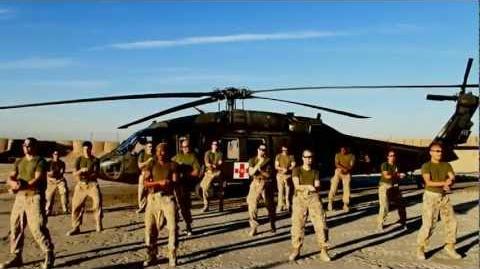 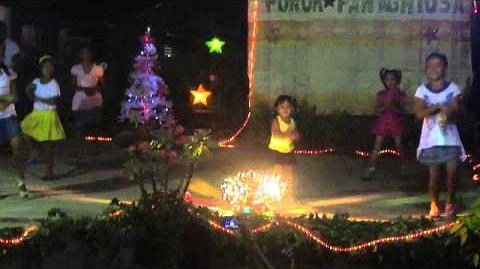 Clairestelle gangnam style Siquijor Philippines
A group of children performing the dance in Siquijor Island, Republic of the Philippines. It was most likely filmed in December 2013 (due to the Christmas decorations present) as the video was sent on April 2014
Add a photo to this gallery
Retrieved from "https://althistory.fandom.com/wiki/Gangnam_Style_(Apocalypse:_2012)?oldid=1380410"
Community content is available under CC-BY-SA unless otherwise noted.