The Republic of Genoa (Ligurian: Repúbrica de Zêna) is an independent state in Liguria on the northwestern Italian coast, incorporating Corsica and numerous other territories throughout the Mediterranean.

In 1400 Marco Visconti of the House of Visconti was elected Doge. Genoa also created the Bank of St. George and the Genovese Arsenal.

In 1403-1405 Genoa was at war with Venice eventually leading to its downfall and the Genovese capture of Athens and southern Euobea.

In 1407 Genoa joined in a coalition with Castile and Aragon to participate in the Second Barbary Crusade. The Genovese navy in the war completely destroyed the navy of the Ottoman Empires. At the conclusion of the war, the Republic of Genoa created the Duchy of Constantine and halted piracy from Tunis.

In the 1420s Genoves Crimea fell as well Constantine. During this time Genoa also praticiatipted in a crsuade against the Ottoman Empire. Also in 1427 the March of Montefferat joined the Republic of Genoa, thus becoming the first portion of Genovese terraferma. 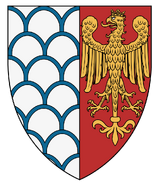 Coat of Arms of Anios, Lesbos and other Greek Isles 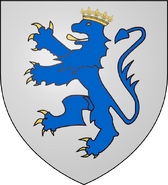 Coat of Arms of Athens 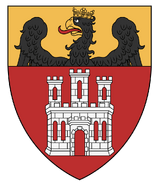 Coat of Arms of Chios 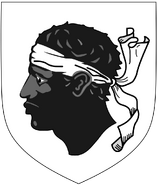 Coat of Arms of Corsica 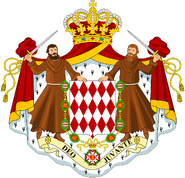 Coat of Arms of the Sardinian Isles