The German Union is an international organization in the Holy Roman Empire. Conceived by Ludwig I of Hesse, it was offered to the Grand Duchy of Bavaria, the County of Oldenburg, and the Duchy of Hamburg to create an organization to provide for economic prosperity and a common defense.

In general, the political body of the German Union is mostly composed of rich, land owning, Christian men.

However, there is no explicit prohibition of women, ethnic, or non-Christian people being elected as a Chancellor, Grand, or General Councillor.

Despite the fact that women, ethnic, and non-Christians can run for office, the likelihood that they achieve any position of power is extremely low. For instance, while a young woman may run for a seat in the General Council, she would most likely never be elected and would also be ridiculed for trying. In most countries of the German Union, women and religious minorities are barred from owning land and inheriting anything.

Wealthy, white widows are among the only slightly plausible contenders for being elected. Since they may come into owning land in their own right (inherited from their late husbands, which in itself is rare), and if they are above forty years of age, they are technically able to run and be elected to the Grand Council, but such an occurrence is vibrantly low for the mid-Fifteenth century.

No nation nor House shall have two consecutive candidates elected.

No man may be elector prior to his thirtieth birthday.

The Chancellor will hold office for five years, and can be renewed once.

The head of a nation may not be elected Chancellor.

Possible candidates will be put forward the January previous the Chancellors last year in office. The monarch of a nation may send up to two people to run in the primaries. These two people must belong to the same political faction or party. Note that political parties will have no power in the German Union government and merely exist to simplify the voting process. Voting for the candidate begins in May and ends in July. This stage is called the Primary. Voting is held in the voting regions (more information below)

Hesse sends Albert and Markus to the primaries, they are apart of the Hessian Party.

Hamburg sends Eleanor and Isabella to the primaries, they are apart of the North German Party.

Oldenburg sends Elisabeth and Jacob to the primaries, they are apart of the Osna Party.

Markus receives 19% more votes than Albert, he is the Hessian candidate

Isabella receives 79% more votes than Eleanor, she is the Hamburger candidate

Elisabeth receives 2% more votes than Jacob, she is the Oldenburger candidate

Voting for the Chancellor will be conducted between October and December. There should be only four people running for Chancellor.

EXAMPLE: With a voter turnout of 87%:

Elisabeth receives 51% of the vote

Mark receives 21% of the vote

Mary receives 10% of the vote

Isabella receives 5% of the vote

The winner of the election will be announced on December 15.

EXAMPLE OUTCOME: Receiving 51% of the vote, Elisabeth of Oldenburg is the Chancellor of the German Union. Her original party will have no presence in her chancellery.

First, before voting occurs, possible candidates must be put forth. This begins the January of the year before term end. So in this case, January 1444, and then again January 1449, and again January 1454, etc ...

The monarch of one of the member states of the GU will be responsible for sending out potential candidates. The monarch must send two people. In total, this would add up to eight people, from Bavaria, Hesse, Oldenburg, and Hamburg. Each two persons sent would belong to a party or faction based in their country. There will be four factions or parties.

In May, voting begins. This is the first stage, named the Primary Elections. Each of the two people sent would be under one ticket. There will be four tickets, corresponding to the party or faction of the possible candidates. Despite the fact that the two people are under one ticket voters may only vote for one of them. Once voting ends in July, there will only be four people remaining, while the other four would be voted out of the primaries.

In October, the second stage begins, named the General Elections. Voters will be presented a list of the four candidates who won the primaries. Voting will then commence on who the future chancellor will be. To win, a candidate must have a higher vote than all other candidates. Also, a candidate must also achieve more than 25% of the vote to be considered.

Each nation will be divided into various districts to ease the voting process and eventual counting. There are 26 districts. 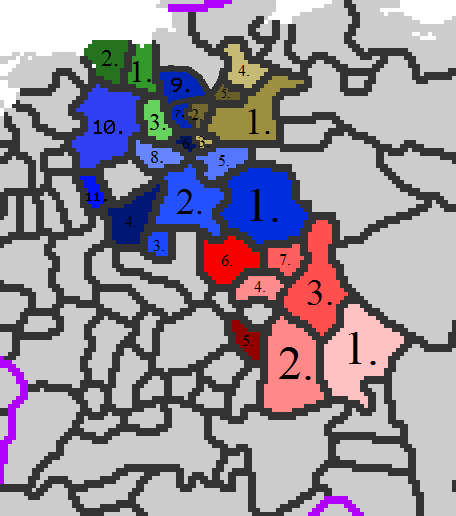 Elections are held every four years. Each term will last four years and can only be renewed twice more, allowing for a maximum of twelve years in office.

NOTE: Members of the General Council must be at least 40 years of age and own land.

Voting for general councilors would use the 23 districts in Bavaria, Hesse, Oldenburg, and Hamburg. In total, there will be six candidates from each district. Voting will occur from March to June to narrow the number of candidates to two. Those two people from every district will be elected to the Grand Council.

At the end of voting in June, there will be 46 grand councilors in the General Council.

Voting for President of the Grand Council

The Grand Council votes for a President every two years. Terms last two years and are renewable four times. After elected, the Chancellor must verify the election of the President.

Afterwards, the President will appoint their own Vice President

Elections are held every three years. Each term will last three years and can only be renewed five times, allowing for a maximum of fifteen years in office.

NOTE: Members of the General Council must be at least 25 years of age.

Voting for general councilors would use the 23 districts in Bavaria, Hesse, Oldenburg, and Hamburg. In total, there will be twelve candidates from each district. Voting will occur from March to June to narrow the number of candidates to four. Those four people from every district will be elected to the General Council.

At the end of voting in June, there will be 92 general councilors in the General Council.

Afterwards, the General Speaker will appoint their own Secretary.

The Challencor is the head of government of the German Union as well as head of the executive branch.

(Only ONE person from each country will win the Primary Elections)

Heinrich von Welfsina of Hesse is the new chancellor of the German Union.

Retrieved from "https://althistory.fandom.com/wiki/German_Union_(Principia_Moderni_III_Map_Game)?oldid=1043835"
Community content is available under CC-BY-SA unless otherwise noted.