Hanthawaddy is a country in Southeast Asia.

The capital city of Hanthawaddy is Pegu. There are six main port cities: Pegu, Chauhhpiu, Laskreng, Pahkarkanj, Ayutayo, and Bengalla. There are also smaller port cities such as Martaban and Bassein. 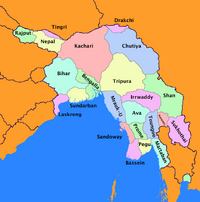 The official language is Mon, but Bengali also has official status. Theravada Buddhism is the official religion, and is strictly enforced. Hanthawaddy's cities have been a breeding ground for the mixing of several cultures, notably of Arawak, Australian, and

Hanthawaddy is a monarchy led by Emperor Smim Htaw. Under him is the supreme Hluttaw, the legislature, which will discuss and make some decisions. From there, messages are carried to different provinces. The government palace is located in Pegu, although there are also government buildings in Bengalla.

Hanthawaddy emerged as a power in Burma following the Forty Years War against Ava under Hanthawaddy's most famous King, Razadarit. Fighting ceased for a short while, only to fire up again in the full-on Burmese War. The following period was known as the First Golden Age of Hanthawaddy, when Hanthawaddy controlled most of Burma, and was in dynastic union with Bengal. During this time, the Mons' economy rapidly grew, and Hanthawaddy also managed to create a co-vassal with Vietnam.

The Ahoms seized Hanthawaddy in 1475, chasing the Warerus (descendants of Razadarit) to Bengal. War broke out along the border between Hanthawaddy and Bengal, until 1498 when the Ahoms were chased to the former Mon colony of Hporubitoi. During the war, Bengal had created the colonies of Piokomon and Jamaicamon. It had also been able to capture much of the area to the north of Burma. Hanthawaddy set up two vassal kingdoms in Tibet: Tingri and Drakchi.

With the reunification of Hanthawaddy, a series of gifted rulers worked on creating a new economy. To do this, they set up five port cities to serve as hubs of international trade, continuously upgrading them and promoting international investment. Hanthawaddy began focusing on its colony of Katimon, which was the most prosperous because it could grow crops such as wheat in citrus that could not be found in Hanthawaddy. Growth was stunted slightly due to a conflict with rajput leaders of northern India, but overall this did not affect growth.

By signing the Treaty of the Kola Poluostrov, Hanthawaddy gained access to whaling in northern Europe, leading to whaling becoming popular among Mons.

Hanthawaddy has military alliances with the following countries:

Hanthawaddy has economic alliances (but not military alliances) with the following countries: 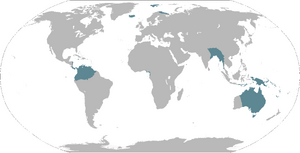 Hanthawaddy asserted itself early on as a colonial power. The following are its colonies as of 1585:
Retrieved from "https://althistory.fandom.com/wiki/Hanthawaddy_(Principia_Moderni)?oldid=550010"
Community content is available under CC-BY-SA unless otherwise noted.