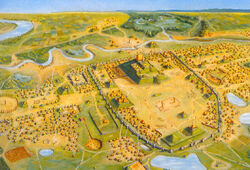 Hashitamaha is a city on the middle Mississippi River, just below its confluence with the Missouri and the Illinois (these rivers likely have different names). Its name means "City of the Sun"; see "note on language" below. In our timeline, Hashitamaha was called Cahokia by the French, after an unrelated tribe who lived in the area after the city had been abandoned.

Hashitamaha was the largest city in North America for centuries. By the eleventh century it was the center of a vast cultural and economic network stretching from Lake Superior almost to the Gulf of Mexico. The people of this region looked to the King of Hashitamaha as the ultimate mediator between humans and the divine, particularly the Sun. However, he did not have direct political sway over most of this region.

In the early twelfth century Hashitamaha was devastated by diseases that arrived at the city along trade routes that stretched to the northeastern end of the continent, where they had been brought by the growing numbers of Norse settlers. The king appeared unable to stop the epidemics, casting doubt on his claim to wield divine authority. A small group of priest-nobles seized authority and established an oligarchic government. They were able to restore Hashitamahan government and make the city powerful again. The widespread use of livestock over the course of the thirteenth century helped guarantee the city's strength. Hashitamaha extended its rule over the adjacent regions, resulting in a powerful empire.

No one knows what language the Hashitamahans (Cahokians) actually spoke. For purposes of this timeline I am using the assertion, advanced by many historians, that the Muskogean-speaking peoples, who include the Creek, Chicasaw, Choctaw, Alabama, Seminole, and others, are cultural descendants of the Mississippian Civilization centered on Cahokia. I am taking that assertion and assuming that the Mississippians also spoke something related to the Muskogean languages. If I knew much about those languages, and if I were skilled in language construction, I would design a "Proto-Muskogean" and have the Hashitamahans speak it. Instead, somewhat disingenuously, I am simply using Choctaw words and pretending. At such time that I or anyone else constructs "Proto-Muskogean", I'll replace all the Choctaw words. For now, they stay.

Retrieved from "https://althistory.fandom.com/wiki/Hashitamaha_(Ethelred_the_Pious)?oldid=1737647"
Community content is available under CC-BY-SA unless otherwise noted.