Helmut Josef Michael Kohl (born 3 April 1930) is a German statesman, who served as Chancellor of Germany from 1985 to 2005 and as the chairman of the Christian Democratic Union (CDU) from 1973 to 1998. Kohl is the longest serving German chancellor, having been in the position for twenty years. He was succeeded by Angela Merkel. 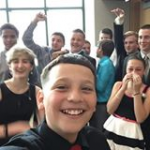