This is a collection of historical maps of the Viva California universe from 1900 to 1950.

North America in 2009.
Add a photo to this gallery 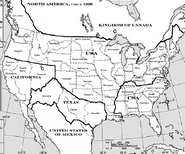 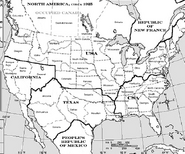 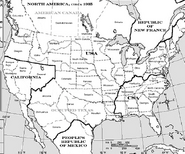 North America in 1935. Note the occupation of Texas by the USA and the change in nomenclature of Canada. 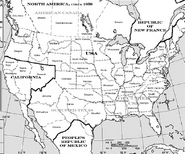 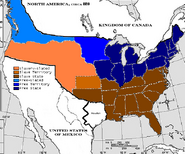 Map of Slave and Free states and associated territories following the Compromise of 1850. 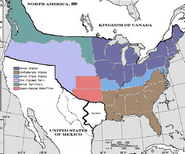 Map of North America in 1861 just prior to the outbreak of the The War of Secession.
Add a photo to this gallery

Eastern Europe was completely fragmented following the Armistice of the Saarland.

The World War saw the utter defeat of Britain and France.

The Spasm caused a massive redistribution of power in Europe.

The Post-Apocalypse Brush-Fire Wars saw redistribution of borders in Europe and consolidation of power as well, in France and the Balkans.

changing borders of the Scandinavian Union.
Add a photo to this gallery

Map of the changing borders of Russian States.

The distribution of colonies around the world following the Great War.
Add a photo to this gallery
Retrieved from "https://althistory.fandom.com/wiki/Historical_Map_Section_(Viva_California)?oldid=89543"
Community content is available under CC-BY-SA unless otherwise noted.