In most cultures, humor (or humour) was vastly affected by Doomsday and its aftermath. Many people have turned to jokes and humour as a way of relieving tension.

This page hopes to documents all types of humour and jokes that have become popular in the time since Doomsday.

(Immediately after Doomsday cannibalism was common.)

"Shut up and finish eating."

The cannibal tribes (before the war) were relieved to realise that cannibalism is now commonplace.

Although not an actual joke, joking references to cannibalism have found their way into everyday slang in many places, generally in reference to meat products of dubious quality, e.g. kiddie pies, baby burgers, baby on a stick, etc. There are also occasional comments by people presented with dubious looking pies, stews, etc, to the effect of 'oh, so that's what's happened to (insert name of someone who's missing) ' although this is generally considered rather crass.

A joke that has done the rounds across the former UK, usually with the neighbouring town's name added in:

A young boy asks his grandfather: "Grandpa, is it true that, in 1983, there was a nuclear war?"

"Yes, there was, son." — answered the Grandpa and patted his grandson on the top of his head.

"Grandpa, is it true that it had absolutely no consequences?" asked the boy

"Yes, absolutely" — answered the Grandpa, as he patted his grandson's second head. (Often added: "And they strolled off together, wagging their tails").

How many (insert name of town/country here) does it take to change a light bulb?

Answer: None, they simply hold the bulb and it glows on its own!

A rather more tasteless (not to mention groan worthy) one:

"I went to a party in (insert name of nuked town here); it was a blast."

Among the nations that have cropped up in the former United Kingdom, there is a feeling that the people who went to South Africa and formed the nation of New Britain were cowards, and numerous jokes have been made on this topic. For example:

King Andrew has announced that New Britain will be changing its national anthem. The new anthem will be the Del Shannon tune "Runaway"

Q: Why don't they use fireworks in New Britain anymore?

A: Because every time there's a display everyone runs to the docks.

During the New Britain vs Cleveland game at the 2010 World Cup, the Cleveland supporters (a mixture of mainly Cleveish and Lancastrian individuals along with people from other British survivor states) indulged in the tradition of mocking the opposing side, on this occasion taking their inspiration from Monty Python:

Bravely ran away away.

When danger reared its ugly head,

They bravely turned their tails and fled.

And gallantly they chickened out.

Bravely taking to their feet,

They beat a very brave retreat.

Bravest of the braaaave, New Britain!

Many jokes formerly applied to the French by the British (generally in the vein of 'surrender monkeys') have been changed to fit the New British.

Many jokes have resulted from the growing perception of inbreeding amongst the Woodbridge population. For example:

Q. How many members of the True British Army does it take to light a fire??

A. None; they don't need to light any fires where they're going!!

{Ghoul is a common name for a Mutant}

Q What's the difference between a Feral Ghoul and a Lawrence Raider?

A None; you don't want to know either one!!

Q why does King Christian wear red and white braces?

A to keep his red and white trousers up!!

"Why does Bolivia have a navy if it has no coast?"

"The same reason you Argentines have a ministry of culture."

An inspector from the LoN in the company of a Spanish military visit a few fields in the Rif, where it is said that he had hashish plantations.

"They've done a great job. You say they have seized these crops all the way to the top floor?"

"What've they done with the confiscated hash?"

An Iberian knew an Andorran. They talk, and it is asked:

"There is so little in the world, and yet you prosper. How do you do it?

"We don't discuss that with anyone."

A Spanish priest, an Andorran priest and a Basque priest are talking about how to distribute the money through collections:

The Basque says: We drew a line on the ground and threw coins into the air, those falling to the right went to God and those that to fall to the left to the parish.

The Spanish says: We traced a circle on the floor and threw coins, those falling within the circle to God and those that fall outside the parish.

The Andorran says: We launched the coins into the air. Those that continued flying were for Him, and those that fell went to the parish.

The difference between a Finnish wedding and a Finnish funeral is that at a funeral there's one person not having vodka.

A Finn, a Swede and a Norwegian found themselves deserted on a small island. A Cannibal tribe lived on the island, and they imprisoned the three men. The cannibals gave each of them a final wish. First they asked the Norwegian. The Norwegian wanted to see his wife once more. The cannibals went to find the wife. After he saw his wife, the Norwegian was eaten, and the cannibals made a canoe out of his skin. The Finn wanted to smoke one more cigarette. He got his cigarette. After he was finished, he was eaten and his skin was used to make a canoe. Then came the Swede's turn - he wanted a fork. He started to punch holes into himself, and yelled: "YOU WON'T MAKE A CANOE OUT OF ME!"

A Swede was walking down the street with a duck under his arm.

Q: What is the difference between Swedes and Norwegians?

A: The Swedes have nice neighbours!

A Norwegian went to a museum. The tour guide was explaining: "This sword is over 2000 years old." The Norwegian paused for a second to think about it and then asked: "How is that possible? We are only in the year 1998."

Q: Why do Danish people never play hide and seek?
A: Nobody wants to look for them. 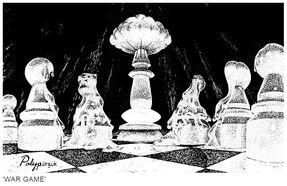 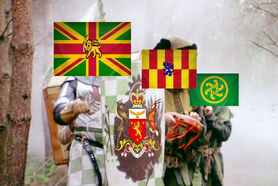 An artist version of the New British "ran away", for the 10 anniversary of the incident
Add a photo to this gallery
Retrieved from "https://althistory.fandom.com/wiki/Humour_(1983:_Doomsday)?oldid=1845908"
Community content is available under CC-BY-SA unless otherwise noted.