Iran (Persian: ایران), officially the Imperial State of Iran, is a country in Central Eurasia and Western Asia. Established in 1924 after the downfall of the Quajar Dynasty. Includes Afghanistan after 1930. It borders to the with Turkey, Confederation of Arab States, Transcaucasia, Turkestan, Afghanistan (until 1930) and British India.

Beginning the 20th century Persia was ruled by the Quajar Dynasty. The Iranian Constitutional Revolution (1906) had give the country its first constitution and elected assembly (Majlis). However the ruling elite and Sultan Ahmad Shah Qajar would most of the time try block or limit its implementation and cut down demands for more democracy.

The Great Game had in many aspect made of Iran a country under the influence and conflict between Russian Empire and British empires. Two events would ease foreign intervention, followed by more indirect methods of imperialism. The first one is the triumph of the Russian Revolution in 1919. The new state nullified the Treaty of Gulistan (1813), Anglo-Russian Convention of 1907 and decided to publish all secret treaties. Followed by the failure of the Third Anglo-Afghan War of 1920 for the British Empire, that leads to an agreement on status quo of the border of British India and Afghanistan. This events would giving space to pursue an independent line in internal and foreign affairs.

In the 1920s it had to deal with continuous rebellions supported by the socialist Transcaucasia in the Iranian provinces of Azarbaijan, Gilan and Mazandaran. Having a brief existence in the Persian People's Republic (1923-1924). After its fall, political parties identified with socialism or worker's and peasant's rights where banned or put under police surveillance. In 1924 it was signed the Anglo-Persian Agreement under British pressure has a compensation in helping to disband the Persian People's Republic. The Agreement was widely viewed as establishing a British protectorate over Iran. It aroused considerable opposition, and the Majlis refusal to approve it. The Persian Cossacks under Brigade officer Reza Khan marched into Tehran and seized power. Reza Khan briefly governed has Prime Minister until his appointment by the Majlis has new Sha of Iran.

The relationship of Iran with the Emirate of Afghanistan was mainly based on mutual defense against the incursions of communist rebels in the provinces bordering Turkestan and an hypothetical invasion from Turkestan. After Reza Khan's coup, the Emir of Afghanistan Amanullah Khan was force in signing the Treaty of Herat in 1924 in exchange of military help in crushing tribal rebellions and communist uprisings in the northern provinces. By the said treaty, Afghanistan became all but in name a part of Iran.

The fall of the Afghan Democratic Republic (1923-1925) marked the end of direct intervention in Afghanistan and Iran of the socialist states. The Treaty of Recognition (1929) would end the hostilities of Iran with Federation of Socialist Republics and socialist Turkestan and re-establish diplomatic relationships. On the death of Amanullah Khan in 1930, the Grand Assembly (Loya Jirga) votes the union with Iran. Reza Khan would be crowned in Kabul. The Iranian Majlis, after a snap election that included the provinces of Afghanistan would proclaim him Shahanshah of the Imperial State of Iran. The annexation of Afghanistan would have an early approval by the ICF and French Union. The new geopolitical situation placed Iran as a barrier against communist expansion in the rest of Asia and Middle East. Both the British and French regional blocks expanded their military and economic assistance. 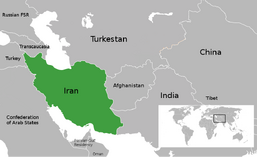 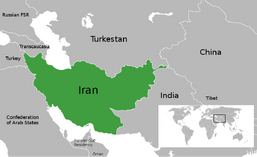 Iran after 1930
Add a photo to this gallery

For decades the governing elites, traditionalist groups, Shia clergy, merchants, emerging political actors and civil society would fight over the issues of modernization and democracy. On the ascent of Reza Khan, nationalism became another key group. Since 1922 state technocrats, in part promoted by the Shahanshah would also play a mayor part in political life in white collar organizations and the state organism. All Shahanshahs would maneuverer in this diversity of groups in keeping their power and the integrity of the state.

The Constitution of 1906 organizes the Imperial State of Iran. It distinguishes the executive, legislative and judicial powers.

The voters and electors are men over over 25 years old, fully literate in Persian or Pashto (1930), and with the following conditions: registered in their locality or possess property of the value of at least one thousand túmáns or a definite office and business: or belong to a recognized guild, must be engaged in a definite craft or trade, and must be in possession of a shop of which the rent corresponds with the average rents of the locality.

Iran is divided into provinces (ostān or wilayats). The provinces are divided into counties (shahrestān or wuleswali), and subdivided into districts (bakhsh) and sub-districts (dehestān). At all levels governors are appointed by the Ministry of Interior.

The Imperial Iranian Armed Forces are divided in the following services:

Internal security is served by the Iranian National Police and Iranian Gendarmerie.

Retrieved from "https://althistory.fandom.com/wiki/Iran_(Twilight_of_a_New_Era)?oldid=1234314"
Community content is available under CC-BY-SA unless otherwise noted.