The Duchy of Karelia, Karelia, is a sparsely inhabited constitutional monarchy in North-East Europe. To the North it is bordered by Lade, to the West by Finland and to the South and East by Novgorod. The population is around 450,000, almost half of whom live in the capital Äänislinna.

The Head of State is Duke Edvin.

The official language of the Duchy is Karelian, which is closely related to Finnish. North Russian is also widely spoken but is not taught at schools.

It uses the Finnish Markka (FIM).

The Duchy is a member of the Kalmar Union.

Long contested between Svealand and Novgorod the duchy only existed as a vague territorial claim for centuries. Novgorod slowly came to own the region, building several towns on the shore of Lake Ääninen/Onega and exploiting the rich mineral deposits. The Great Baltic War resulted in Novgorod making a small sliver of its territory independent in 1774 as the Duchy of Karelia. A member of the Estonian ducal family was chosen as the Duchy's new ruler. In reality however, Karelia was a Svealandic puppet state and had virtually no autonomy.

Once Finland declared independence in 1801 Karelia became the focus of its foreign policy, if not aiming for outright annexation, but definite influence and expansion at the cost of Novgorod. Novgorod would invade Karelia for the last time in 1842. Heavily defeated by Finland, it would cede a vast tract of land, plus important iron ore deposits at Lake Ääninen to the Duchy. Many thousands of North Russians would flee southwards but an agreement not to impose Lutheranism on the population helped stem the flow and stop the economy collapsing. As a result it is the only Orthodox member of the Kalmar Union.

Kalmar pressure on Finland allowed the Duchy to become fully independent in 1845.

The rule of the dukes has so far been light. During the 'Finnish Phase' most decisions were subordinated to Helsinki but on full independence Duke Leo I instituted a wide range of measures intended to reconcile the Russian population but to also begin to exploit the resources of the large but empty land. Leo II used the income from mines on Ducal land to begin the Academy in Äänislinna, attracting intellectuals from around Europe, including leading lights such as Gunnar Atterberg and Anders Ørsted to teach. This institution would quickly become reknown for scientific and technical excellence and would help develop the potential of the duchy. Thanks to Leo II's investment and forsightedness Karelia currently has one of the highest standards of education in Europe.

The Duchy is a constitutional monarchy and operates a single chambered parliament. The current head of state is Duke Edvin but his role is merely as a figurehead. The Prime Minister is Päiviö Luukanen. Elections are held every 5 years. 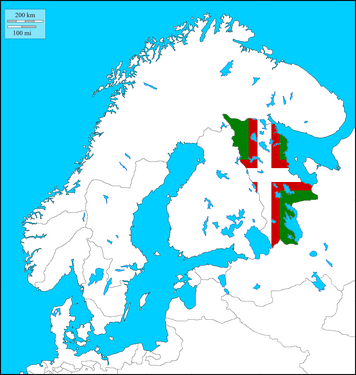